Google reports the kits are popular, especially for STEM education,  but educators/parents had to buy the Raspberry Pi boards and micro SD cards themselves, as well as flash the firmware to the cards. 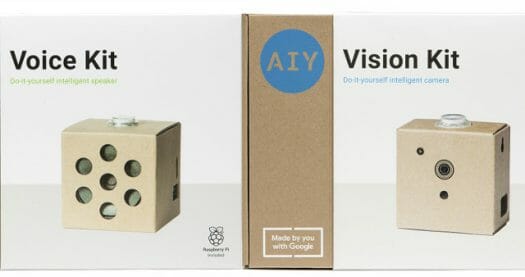 So the company decided to redesign both kits to work with the Raspberry Pi Zero WH (RPi Zero W with headers), and include it inside the box with cable and pre-provisioned SD card, so kids can get started faster with experimentation with having to setup the kits.

Kids now just need to do the assembly before getting started.  The AIY kits sell for respectively $49.99 and $89.99 in Target in the US, but Google is working with partners in order to make the kits available  worldwide.

A new Google AIY Projects Android app has also been developed in order to make wireless setup and configuration easier, although you could still do the configuration with monitor, keyboard and mouse. iOS and Chrome versions of the app are also in the works.

The versions of the kits without an Rpi included seem to have dropped in price. I got an email from Arrow about them going for $15.99. The voice kit is specifically mentioned. I don’t know if the price change is for both kits.