One of those device is Nexbox A95X Pro that sells for $37.99 on GeekBuying (pre-orders shipping in about 4 days), and also happens to support Netflix HD (720p). [Update: The promo on GeekBuying appears to be over, but it’s now available on GearBest for $36.99 with coupon GBA95X1] 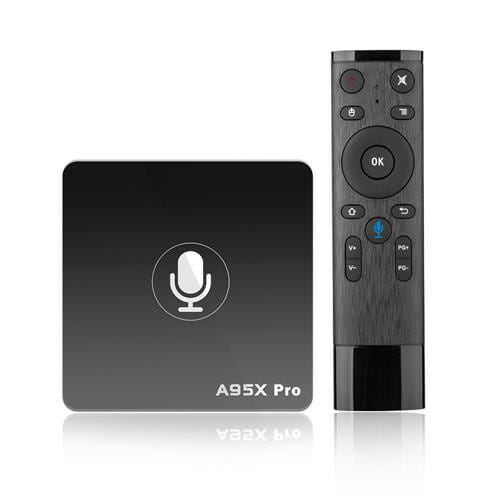 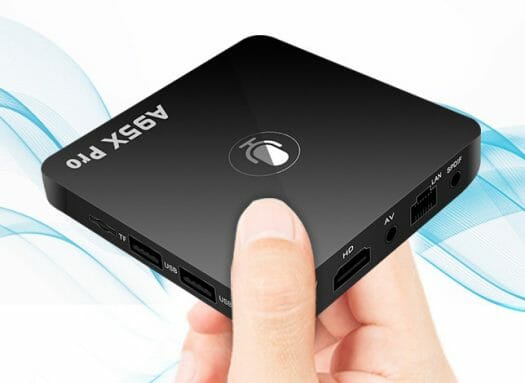 The device runs Android TV (no exact version listed) with OTA firmware update support, and ships with a voice enabled remote control, a power sdapter, a HDMI Cable , and a user’s manual.

The box comes with 2GB RAM, so performance should be decent for watching videos, although video output and decoding is limited to 4K 30 Hz with Amlogic S905W processor, so if you have 4K content at 60fps, videos may not play smoothly. Bear in mind that another Nexbox A95X Pro has also been selling for a while, but it’s based on Amlogic S905X processor running Android 6.0 operating system, and comes with a standard IR remote control (no voice support), so double-check if you plan on purchasing Nexbox A95X Pro with Android TV.  I could not find the latter outside of GeekBuying for now, but I’m sure other sellers will eventually offer it too.

Another one (that’s already out of pre-order when shipping from China, but looks to have a crappy remote :p) seems to be this one: https://www.geekbuying.com/item/MECOOL-M8S-PRO-W-S905W-2GB-16GB-TV-Box-with-Voice-Control-391693.html

The Android TV version ships from Germany and China. The Italy and Spain version are the non-voice control version and don’t list Android TV, but just Android 7.1. I haven’t ordered it, but you seem to be correct that some cheap manufacturers are moving from Android to Android TV 🙂

However, as the specs say, it’s not Android TV. So it’s a bit besides to point I’m making 😉

Can anybody confirm that all the Amlogic boxes with Android TV have a locked bootloader? No flashing, no modding, no rooting.

Amlogic going forward seem to be moving to Android TV

Is it certificated by Google?

It should be, and there are a bunch of OEM Android TV devices @ https://sites.google.com/view/droid-tv/oem?authuser=0

That’s an independent website, not an official website. Nexbox is not listed (yet), so better wait for feedback from users or reviewers first.

Thank you for the link

From the reviews on TY, it doesn’t look like Android TV at all

That’s because those are other versions of the TV box. The one above was still for pre-order a few days ago, so I doubt any reviewers had time to post a review yet.

It is down to $36.99 on Geekbuying again. It says on the site that is ‘based on’ Android TV OS

Nexbox A95X Pro TV Box is based on the Android TV OS, with high speed and smooth performance, designed to turn your regular TV into a smart one.”

I bought an R-TV BOX MINI+ a few months ago for accessing NETFLIX and streaming TV on demand. The device freezes sometimes and I find it annoying when I need to type in a program name with the clunky virtual keyboard. With some apps (including NETFLIX) the bottom of the display is clipped, a significant problem. I’m thinking of replacing it, probably with an Android TV box with voice remote such as this Nexbox A95X Pro or the MECOOL M8S PRO W. Is the voice remote a genuine advance in user convenience and operability or is it just another gimmick… Read more »

Is this device run Iptv which Requires subscription!!!!

Most Android boxes can run IPTV and you can get IPTV free, no subscription.

Where I can get the stock firmware to this? I’ve bricked mine…

You need to know which version you have, hardware and original Android version.

Have you asked the supplier you bought it from?