So it looks like Amlogic has outed another SoC with Amlogic S905W processor that appears to be a cost down version of Amlogic S905X limited to 4K @ 30 fps video decoding. One of the first device to used the new processor is Tanix TX3 mini TV box that should be priced similarly to Rockchip RK3229 devices. 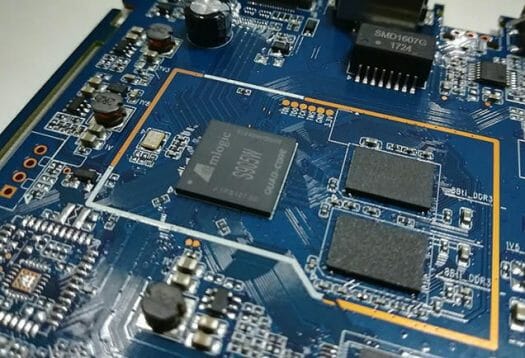 . The devices runs Android 7.1 with Kodi 17.3, and ships with a power adapter, a HDMI cable, an IR remote control, and a user’s manual. It’s interesting that they’ve allegedly kept HDMI 2.0 since video decoding is limited to 4K @ 30 fps.

We don’t have pricing info, but since it’s supposed to compete against Rockchip RK3229, prices should be similar to the ones for Tanix R2 TV box that is around $28 with 1GB RAM/16GB flash, and $30 in 2GB/16GB configuration based on the prices listed in GearBest. More details may be found in the manufacturer’s product page.

[Update: Tanix TX3 mini is listed on Aliexpress, but at prices that are not very competitive
Update 2: It’s also on GeekBuying for $31.99 with PYNNHDAH coupon]

I wonder how much are these SOC’s compared to S905X? Allwinner touted their SOC’s cost $5 or less…

AIDA64 says the max CPU-freq is capped at 1.2 GHz and the box still runs rather hot. Wonder if it could/should be unlocked?

So apart from the lack of VP9 support, the SoC runs slightly slower. Still, definitely a bargain for that preorder price.

Can anyone provide a link to kernel source 3.14.29 (that compiles) for S905W devices, using the .config from zImage ?

To answer my own question, source in http://openlinux.amlogic.com:8000/download/ARM/filesystem/Linux_BSP/buildroot_openlinux_kernel_3.14_wayland_20170630.tar.gz produces binary, don’t know if it executes yet!

Dave B
Dave B

Although this code builds and the kernel modules will load, the zImage won’t boot so the request still stands! The kernel at github.com/adamg88/linux-amlogic won’t execute either and I can’t find any application notes on amlogic.com for (this) p281 board.