Imagination Technologies introduced PowerVR Series2NX neural network accelerator (NNA) last year. At the time, the company claimed the NNA would deliver  twice the performance at half the bandwidth over existing competing solutions, and that it was the first dedicated hardware solution with flexible bit-depth support from 16-bit down to 4-bit.

What they did not announce last September were any specific parts. But they’ve just done that today with PowerVR AX2185 and AX2145 NNAs “designed to enable high-performance computation of neural networks at very low power consumption in minimal silicon area”. 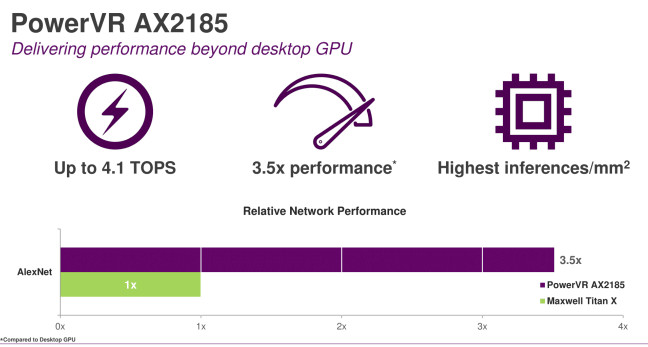 PowerVR AX2185 is said to be the highest performing neural network accelerator per mm2 in the market with eight full-width compute engines delivering up to 4.1 TOPS (Tera Operations Per Second), or 2,048 MACs/clock. AX2185 NNA can deliver 3.5 times the performance compared to a desktop GPU. The NNA is best suited for high-end smartphones, smart surveillance and automotive markets. 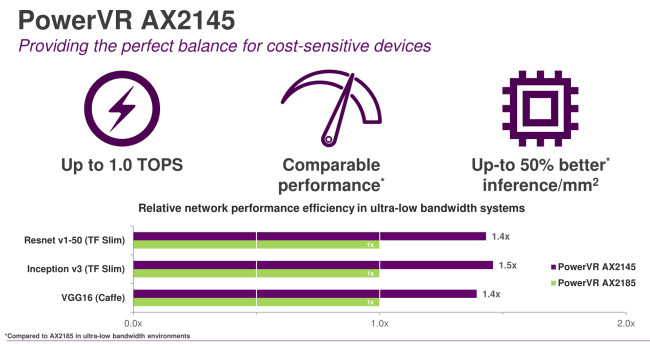 PowerVR AX2145 is a lower cost version for cost-sensitive entry-level and mid-range products that can deliver up to 1.0 TOPS, and should be found in the smartphone, digital TV, smart camera, and automotive markets. Based on the chart above, it outperforms AX2185 in ultra-low memory bandwidth systems by nearly 50% in terms of network performance efficiency. 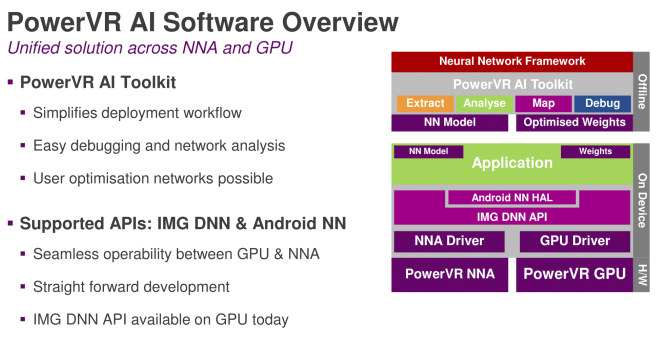 The AX2185 core has already been delivered to some customers, and both cores are available for licensing now.