A short while ago, I wrote about  a tri-panel waterproof solar power bank that delivers up to 4 Watts and comes with 10,000 mAh capacity. I’ve now received a sample of a somewhat similar product, except CHOETECH told me it can deliver up to 24 Watts, which should be more suitable for charging devices like smartphone daily.

The gadget is supposed to be fitted on larger backpacks as we’ll see below, but it comes in a relatively small package. 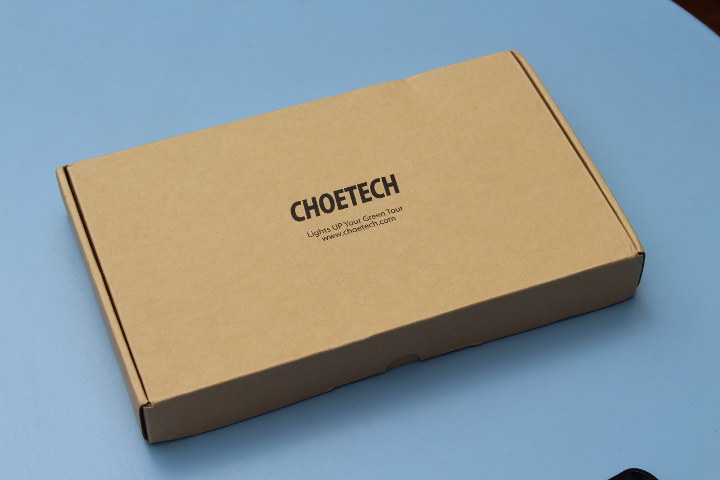 The thing just looks like some purse or wallet out of the box. 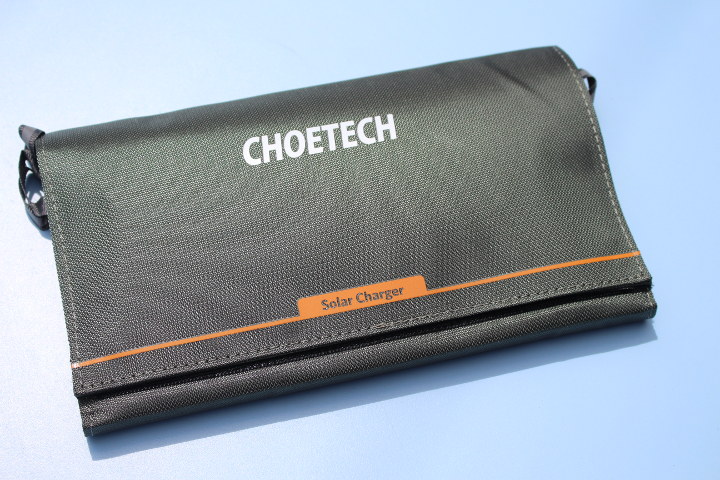 Once it’s unfolded we’ll see four solar panel, six hoops around the design, and some pouch / pocket on the right.

The “junction box” includes a micro USB to USB cable, some silica gel, and four metal hoops to hook around some of the 6 fabric hoops

The text on the photo above explains cloudy weather and indirect sunlight may cause the phone not to charge, and that not battery is included… 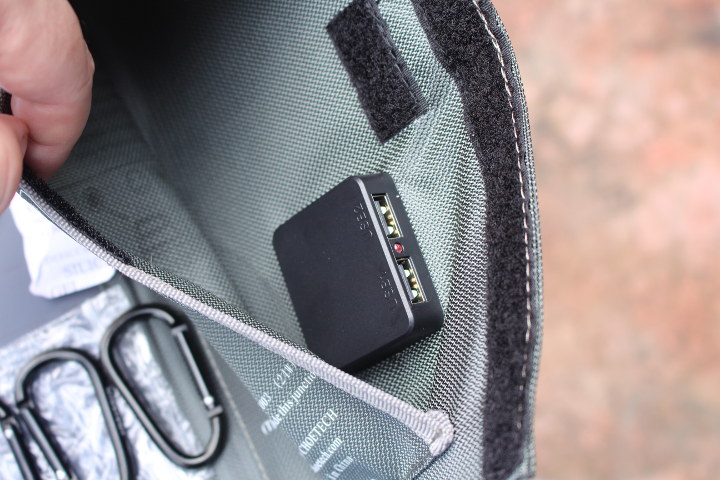 The latter is further confirmed after having a look inside, and instead we can see a box with two USB ports and a red LED that lits up if there’s enough sunlight.

Before actual testing of the device, let’s have a look at the specifications to better understand what to expect:

So in theory it could be as good as a 5V/2.4A power charger in ideal conditions.

FIrst, I tried to find out how it would look installed on my backpack. 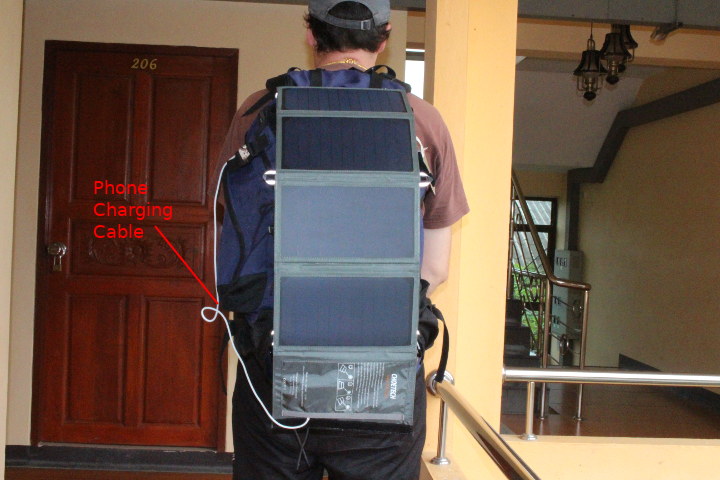 It’s pretty easy to install to it since backpacks usually have many handles and in some case hooks.  Then you can take your phone’s USB cable connect it to one of the USB port and place your phone inside your bag protected from rain and dust. It should also be protected against rain since the USB port is facing down. I open a water tap to pour water on the pocket for 30 seconds or, and everything stayed dry inside.  Another advantage of placing it outside of your bag is that it does not have to take any space inside. 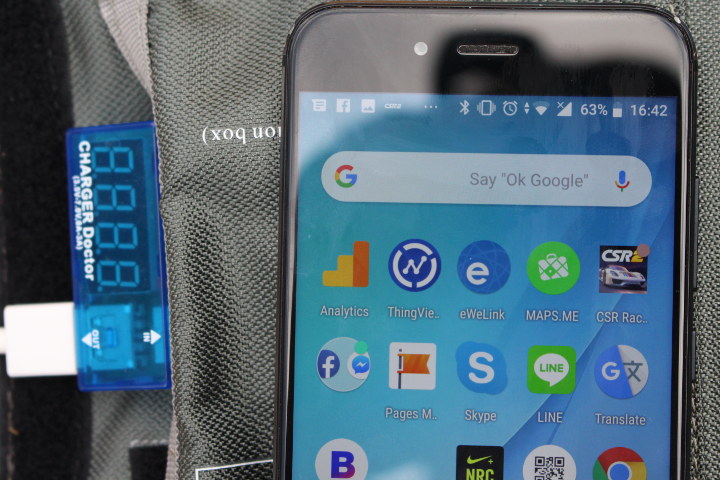 The first day I tried to use the solar charger it was fairly cloudy, and I could not charge the phone at all with the charger. USB Charger doctor reported  5V and 0.000A, and I also removed it just incase it would interfere but same results: no charging.  As a side note, USB charger doctor is almost completely useless outdoors as the display is unreadable, and I had to cover it with my hand to be able to read the values. It’s also impossible to take photos of the readings so you’ll have to trust me :). I search for e-ink / e-paper USB charger tester, all I could find was some fitting with an LCD display – instead of just LED – like UM25C model. 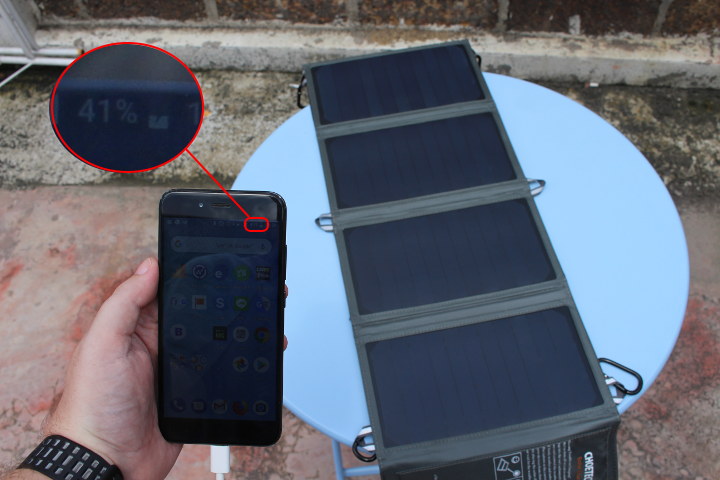 Back to the solar charger… So I had to wait for an extra day, and today is still cloudy, but with the sun coming out from time to time. I could finally get the phone to charge as shown above. The fist time the sun was partially blocked by some clouds, and charging was done at  4.98V/0.69A, and a few minutes later the sun got stronger an USB charger doctor reported  4.95/0.98A charging. For reference I did the test at around 13:30, and the phone is Xiaomi Mi A1 which I can charge at 5.14V/2.00A with its USB power adapter and a similar level of charge.

5 watts charging is actually not too bad, and you should be able to charge your phone daily with the solar charger if you are in the middle of nowhere. I’d expect the wattage to get closer to the advertised 5V/2.4A in sunny day and with the solar panels facing the sun directly. However, I doubt charging while the panels are placed on the backpack works at a very rate in most conditions, and you may want to orientate the panels towards the sun during breaks.

I’d like to thanks CHOETECH for providing a review sample, and you can purchase one of the many solar charger on Amazon for $24 and up. The exact model I reviewed – except for color – goes for $69.99 on Amazon.


More details may also be found on the product page.

One more example of a “funny” product review by CNX…
One of the most important items in a “foldable” (portable) solar charger is weight…
But there is no mention of it…
The product page says 7.2 ounces (205g), but will that be accurate??

Solar systems without intermediate battery are hardly useful. I made myself a small 1 or 2 watt system that is permanently attached to my backpack with Velcro. It charges a single 18650 cell that in turn puts out 5V over USB. Turns out it is quite enough not to have battery anxiety any more. Here is what it look like: https://enduro.ddns.net/s/g7MwjAWRQpD5Mjg

where you get the panels from?

Problem with that design is that all 4 panels are not pointing to the same direction, making MPPT sub-perform. Would be nice to check in STC, 23% efficiency looks quite high.