A few months ago, I won a $5 coupon for DealExtreme, and decided to buy a “Portable 5V (30,000mAh) Li-ion Battery Solar Power Bank w/ Dual USB + LED – Black + White” for just over $20. For the price, solar charging was a nice bonus, and the 30,000 mAh was probably a “mistake” but it did not really matter. The SKU is gone, but 1BA-2 Solar power bank ($23.97) appears to be a very similar product. I did not plan to write about this gadget, but a few things happened that made me change my mind.

First. it took over two months to reach me, instead of the usual 2 to 4 weeks. I ordered on the 9th of November 2013, and received the package on the 25th of January 2014. The reason being that the package got declined by Thai immigration (I live in Thailand). DealExtreme could not explain me why, but I assume it could be because of stricter regulations regarding batteries. They then sent the power bank via Sweden Post which usually takes an awful lot of time, as it goes to Sweden first, before coming back to Asia.

But let’s check the device itself which I received in the parcel below. 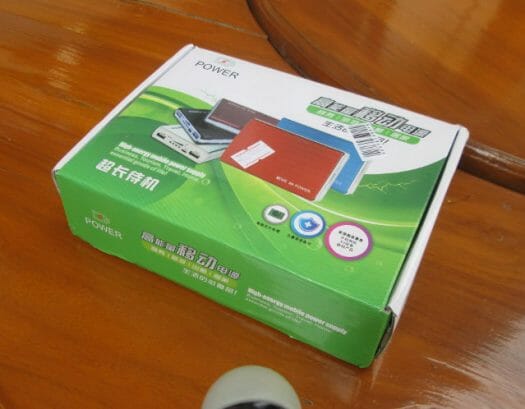 You’ll find the power bank, a USB cable, adapters (mini USB, micro USB, and proprietary crap for Samsung, Nokia, and Apple devices), a user’s manual entirely in Chinese mentioning the model is XHL-2000 or XHL-3000, and a pouch. 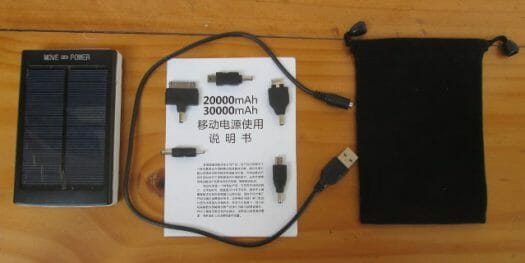 On the power bank, you’ll get 2 USB output (1A and 2A), a power button to start charging, or lit up the white LED (long press), a micro USB port to charge with a power adapter, and 4 blue LEDs to indicate charging status and current charge level. 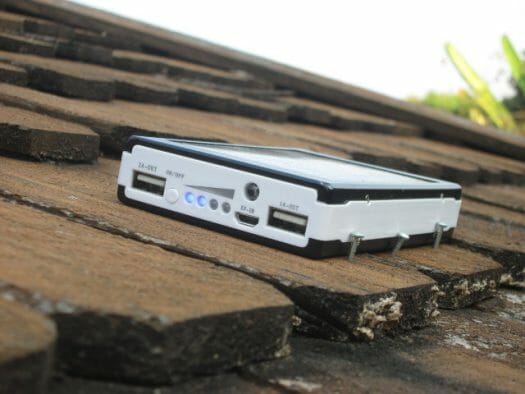 It came with a charge and I could charge my phone a couple of times. Then I decided to charge it outside, placing it on a location with good sun exposure (a roof) to see how fast it would charge, and after 6 days, the charge level showed 2 LEDs on (26% to 50% charge). 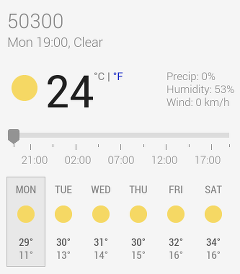 It’s winter here, so it might charge faster when temperature and day length rises. It got about 7 hours direct daily sun exposure. The weather during the test is shown on the right. The power bank will also charge when it’s cloudy or there are shadows, albeit probably at a slower rate.

I could charge my phone (1800 mAh battery) twice after 6 days of charge. That means a full charge would typically take between 10 and 20 days depending on conditions, and that you can’t expect to charge your phone daily with this device.

I should have known this at the time of purchase based on the specifications:

Under ideal & theoretical conditions charging at 1.5W for 10 hours day would take over 7 days to fully charge the power bank.

I’ve also tried to open this gadget, but failed to completely dissemble it.. I could however see it’s based on four 3.7V Lithium-ion batteries as found in mobile phones without being able to read the capacity. You may also want to remove the plastic protection for better efficiency. 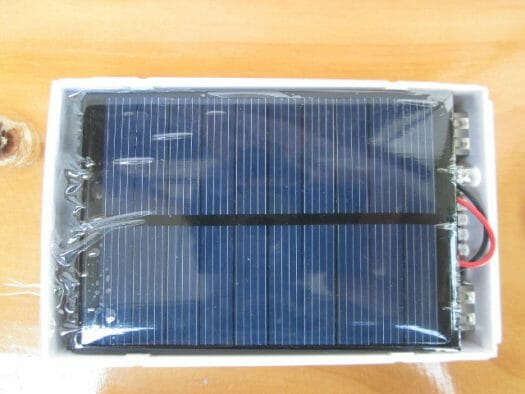 In any case, I got taught a few lessons, some of which I already knew:

I’ll still use this power bank, especially when traveling, but I’ll keep charging my phone the old-fashioned way, i.e. with a power adapter, for now.

Pity you didn’t post a direct photo of the batteries – I suppose they’re under the solar panel on the last image. Have you checked them out? The innards of the first chinese portable USB charger I ever ordered over 3 years ago were quite spectacular 🙂 Specs said 20000mAh, from the size and weight I expected about 7-8000. Reality: single tiny 500mAh li-po cell, quite heavy metal sheet for weight, and a lot of empty space 😀 (https://plus.google.com/117703174153532738894/posts/cxDmpyU7qe8) Usually when you take the thing apart and check the cells directly (sometimes you even have to remove the fake stickers… Read more »

@relghuar
Yes, the batteries are under the solar panels. These are thin flat batteries (like in mobile phone), but I could not remove them without forcing, so I stopped there. I could only read 3.7V, but could not see the capacity.

@Jean-Luc Aufranc (CNXSoft)
If they are cheating, of course they will not make anyone’s life easy to find the real capacity 😉
Or, at best the print is erased, as many times happens.

Thanks for the review!

Any idea what’s going on with shipments from China? I had a shipment *without any batteries* returned for ‘security reasons’… Wireless keyboard that takes AA batteries is relevant to security how???

@onebir
And another guy in Facebook told me he had to wait 96 days to receive a parcel from China (Also a DX order).
I can see his parcel tracking record, and it got stuck in China for nearly three months. (September to December). Very odd.

@Jean-Luc Aufranc (CNXSoft) I heard they’re worried Li-ion batteries will explode & some postal services (China, HK, Singapore?) banned them. But I don’t understand why shipments without batteries would be affected.

I bought same device, as second one. First has declared 10000mAh and I expect that this will be revolution. Once I received it, immediately I can see that it is lighter than previous with 10000 mAh capacity. I tried to charge the devices from this 30000 mAh and find that it has lower capacity than one with 10000 mAh.
It was disappointment for me when I open the device and find two small flat batteries, with not promising capacity.

What they say is you can charge 2 iphones at once. It is 15000 mah, so 30,000 mah rating. I still have not found instructions posted in english.. Anyone run the instructions on google translate?
🙂

@SunTzu
The battery is most likely 10,000 mAh, so good for about four charges of a typical phone with a 2,000 mAh battery.
To charge two devices you just need to plug the USB cables, and click on the button.

thanks for your review buddy! :peace:

Pls My Solar Power Bank Is 10000mah how long will it take to be full when charging in the sun ?. Does it require a strong heat of the sun or less? thanks.

@Jeffrey usen
It depends on your solar panel too. Mine takes about 2 weeks to fully charge.

Solar power bank with a funny form factor which allows you to plug your smartphone directly into the power bank without cable.
http://www.tinydeal.com/12000mah-dual-usb-port-portable-solar-power-bank-with-fixed-slot-p-156698.html

Should I remove the plastic over the solar panel? Sorry if this is a dumb question it looks like it should but also I don’t want to damage the panels

@Nate Skiba
I removed mine, and it’s still working after one year and a half. That is some sort of miracle, as I left the thing under the rain at least a dozen times…

Is it really 9hours to be full charge

I have had quite a few power banks like the one you review here, perhaps six or so. Dirt cheap as they are.

I’d say the quality is well below par. There is only one left now and after 18 months of usage it
is not preforming much no more and it has now taken in some moist which has caused
damage to it. This has made the batteries expand which has cracked open the case. Solar Panel
is also just some silly sales gimmick of no use at all.

@Giovanna de’ Medici
Mine is still working after two years. I only charge it with the solar panel though, never with a charger.
The USB ports are now a bit rusted, but I can still charge my phone when needed.

Am totally illiterate when it comes to anything even remotely akin to electronics. Ordered an Explorer Solar Power Bank from Amazon. It is 10000mAh high capaicity, dual USB Ports. The instructions are vague and few of them. There are four lights across the bottom and all four were blinking…one after the other across the bottom. Just to be sure it was fully charged, I have connected my iphone and in a very short period of time it has gone from 67 to 76% (like in 15 minutes or less) but now down to 3 solid green lights so am assuming… Read more »

@Beverly
The LED torch light is exactly that: a torch light. If you press the button 2 or 3 seconds it will turn on.
When I connect my smartphone to one of the USB port, I need to press the button to start charging.
You can charge it with a USB charger if you want. Cloudy days may also charge the battery (you’ should see the 4 LED blink), but slower.

Not sure which model to recommend.

@Costa
It depends on your solar exposition. Yout power bank is likely closer to 10,000 mAh (like mine), and based on my experience, if you want to charge your phone with the sun exclusively, it should take around 3 to 5 days (provided it’s sunny most of the time) to have enough charge before being able to charge your phone, with the latter taking a few hours only, just like any other power bank.

these are the instructions or found in this power bank Features .adatto to almost all types of mobile phones and digital phones that have the USB cable connector. .fornendo different adapters of different charging. compatible with almost any type of mobile phone and digital products with USB function. . Charge for iPhone / iPad / MP3 / MP4 / GPS / mobile phone bluetooth device some tablet PCs and other digital products, . with a precise IC protector to avoid a security -charging excess or – discharge and short circuit. . intelligent power manager solution, soft switch button, stable and… Read more »

I’ve just bought one of these (similar, not identical) from Amazon. The point of the solar panel isn’t to exclusively charge the battery, it’s to keep the battery topped up during the day when the device isn’t in use.

What I really want to know is, if I have it plugged in to the wall overnight, can I daisy chain my mobile off it and have both a fully charged phone and battery pack by morning? (All without damaging the unit of course).

Hi there, thanks for making this post, I had no idea about how to use my power bank until I got here. I want to ask if there is any signal the power bank makes when charging with solar energy or if there is anything I should do to it so I can use the solar panel