NanoPi Duo was launched last year as an ultra-cheap ($8+) Arm Linux board that fits into a breadboard. The board was powered by Allwinner H2+ processor coupled with 256 or 512MB RAM, and the infamous XR819 802.11b/g/n WiFi chip. 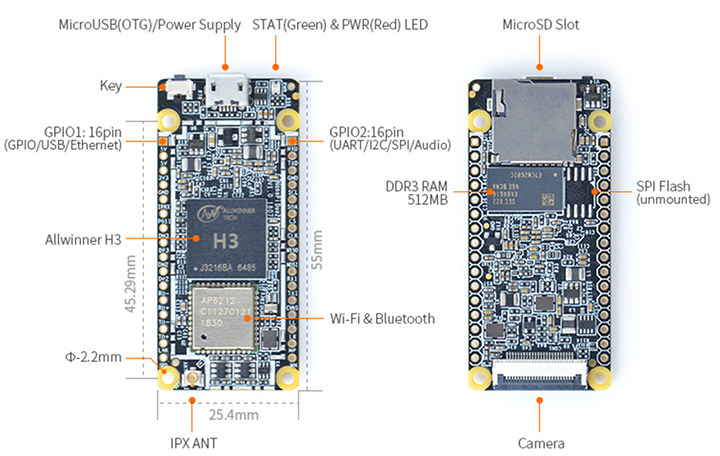 The company provides binaries and source code for U-boot, Linux Kernel 4.14, and Ubuntu 16.04.2 LTS (Xenial). All you need should be in the Wiki.

As noted the in the introduction, the company also design the “IoT-2G carrier board” (aka NanoPi Duo2 IoT-Box) for the new board specifically for 2G Cellular IoT applications. The carrier board includes: 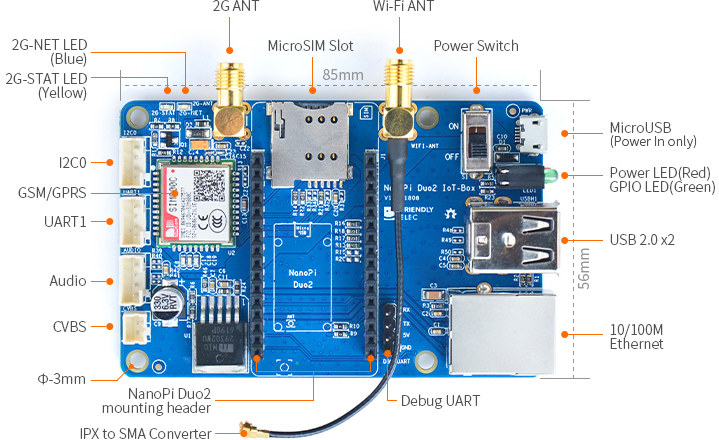 The board has its own dedicated Wiki page for more hardware information, and simple quick start guides for GSM connectivity, audio recording and playback, and USB Dot matrix displays.

NanoPi Duo2 has just launched for $19.50, and the NanoPi Duo2 IoT-Box with WiFI/Bt and GSM antennas adds another $10 to the total. As usual when it comes to 2G cellular connectivity, you should make sure your provider / country is not about to phase it out, since what is referred to as “2G sunset” has already happened in several countries.

Fortunately this is wrong, FriendlyELEC already moved on to 4.14 (LTS).

BTW: that’s also where I spotted this board the first time (back then planned with RTL8189 just like on early NEO4 PCB revisions): https://forum.armbian.com/topic/8031-nanopi-duo2-and-nanopi-hero-are-coming/

I’m curious as to who is dumb enough to buy a product with 2G/GSM only any more. More and more networks are being closed in favour of freeing up the frequencies for 4G, which means that within a couple of years at the most, these things will be useless. Even some 3G networks are being shut down already, so if it doesn’t have 4G, what’s the point of wasting money on it?

Isn’t there a difference between 2G voice and data services? At least according to http://maps.mobileworldlive.com countries where 2G networks have been shut down officially coverage is quite ok to excellent.

And I wouldn’t consider 10 bucks ‘wasted money’ if it serves a purpose even for just a few months/weeks.

https://1ot.mobi/blog/2g-and-3g-networks-are-shutting-down-globally
Obviously it varies, but it would also seem that 3G is going to die quicker in some places than 2G, as suggested in that article. But assuming that article is correct, anyone in the US, Canada (except one network), Australia, Korea, Japan, Singapore and Taiwan shouldn’t bother.

Look, I’m not saying 2G is bad, in fact, for coverage, it’s the best standard, but it’s eating up a lot of frequency space and the networks are the ones that want to re-deploy those frequencies using shorter range, but more data efficient technologies. I guess this is why we got crap like NB-IoT and other various LTE standards for “IoT” type devices.

I just think it’s a bit crazy to launch new 2G devices and to consider developing software for a 2G network device.

> it’s eating up a lot of frequency space and the networks are the ones that want to re-deploy those frequencies using shorter range, but more data efficient technologies

Sure, but from a consumer point of view if 2G is still there and can be used within the next 12 or 24 months why not spending the additional 10 bucks for this module then and upgrading to a future “IoT-4G carrier board” in 2 years when prices came down already?

Most (all?) US networks will not process a new 2G activation. 2G is only being maintained in order to facilitate migration of existing devices off from it.

The SIMCom modules have interfaces in common (AT command set); such software could (probably) be adapted without too much trouble, I think.

Somebody told me 2G would not go anywhere in Europe, because e-call (automated emergency calls for cars) was mandated by the EU, and worked over 2G. I never really looked into the details of that claim.

I heard something exactly like this a while ago, that there are sensitive equipments in the wild relying on 2G that prevent it from going away. It’s possible however as Jon suggests, that they will refuse new subscriptions without a compelling reason (plugging your shiny new friendlyelec board might not necessarily apply :-)).

Whats the advantage of H3 over H2+ in headless applications?
I’m just wondering why FriendlyElec decided to use more expensive CPU.

IKR? I kind of gave up in disgust at least initially on trying to add an XR819 driver bitbake for Yocto a while back because it’s craptastic. X-D

I’ve added support for this in my meta layer here:
https://layers.openembedded.org/layerindex/branch/master/layer/meta-allwinner-hx/

2g and 3g can be accommodate on 4g
in some areas. I wonder if the carrier board is intended to be swapped for a 3g or 4g board latter on.

But will Vodafone active new 2G devices? Doesn’t do any good if they won’t let you connect to it.

Good question, I do not know the answer.

Meh, it’s not like it’s going to be staying all over the world. There’s the rub there. You need to have an option path that offers upgrades to 4G, eventually 5G. Even if you’re not doing a lot of data, they want the old tech to DIE because it’s not an efficient use of spectrum.

My take’s like Icenowy. At least they didn’t put the craptacular XR819 on the thing like the prior micro boards from them and the other usual suspects in this space did. It made the devices much less useful. The Cypress Semi (Formerly Broadcom) device needs only a good Device Tree entry for it’s SD host controller and power up sequencing and it just simply works and well for 2.4Ghz as an abgn device. The BT support works nicely if you have the same for the UART that it’s attached to turned on. (For those not using their Ubuntu Core offering and building your own or using Yocto, there’s a bit of a set of steps FriendlyElec does to get it working right that the hints to do the same sort of thing on your own with the chips (or if you’re using Yocto, just grab the layer) in my metadata layer for my personal projects.

I don’t see a chip antenna in the photo. It looks like that might be another difference with the Duo1; the Duo2 might require an external antenna.

That’s more like a project BoM dependency detail there. The Chiptennas on many of these devices aren’t all that great overall- and it’s just a U.Fl pigtail away from real antennas, including peel-n-stick’s.

Quite a few applications use 2G to transfer data only and it is very cheap. For these applications if they use a 3G or 4G module the cost will be much higher

Does this board FCC or CE certified….?

Hi, I am looking for this modules, do you received any info about the certification – FCC, CE