With Linus Torvalds taking a leave from the Linux kernel project, Greg Kroah-Hartman was the one to release Linux 4.19 last Sunday:

It’s been a long strange journey for this kernel release…

While it was not the largest kernel release every by number of commits, it was larger than the last 3 releases, which is a non-trivial thing to do. After the original -rc1 bumps, things settled down on the code side and it looks like stuff came nicely together to make a solid kernel for everyone to use for a while. And given that this is going to be one of the “Long Term” kernels I end up maintaining for a few years, that’s good news for everyone.

A small trickle of good bugfixes came in this week, showing that waiting an extra week was a wise choice. However odds are that linux-next is just bursting so the next -rc1 merge window is going to be bigger than “normal”, if there is such a thing as “normal” for our rate of development.

And speaking of development, there’s that other thing that happened this release cycle, that ended up making it such that I’m the one writing this instead of Linus. Allow me the guilty pleasure of taking a few minutes to talk about that….

I’ve been giving my “How the kernel is developed” talk all around the world for over a decade now. After the first year or so, I was amazed that it kept needing to be given as surely everyone knew how we did this type of thing, right? But my wife, someone much smarter than I, then told me, “Every year there is a new kindergarten class.”

And we all need to remember that, every year new people enter our community with the goal, or requirement, to get stuff done for their job, their hobby, or just because they want to help contribute to the tool that has taken over the world and enabled everyone to have a  solid operating system base on which to build their dreams.

And when they come into our community, they don’t have the built-in knowledge of years of experience that thousands of us already do. Without that experience they make mistakes and fumble and have to learn how this all works. Part of learning how things work is dealing with the interaction between people, and trying to understand the basic social norms and goals that we all share. By providing a document in the kernel source tree that shows that all people, developers and maintainers alike, will be treated with respect and dignity while working together, we help to create a more welcome community to those newcomers, which our very future depends on if we all wish to see this project succeed at its goals.

And that goal we all share is the key here. We _ALL_ want to create the best kernel that we possibly can. We can disagree on lots of different things in other parts of our lives, but we do share this one thing. And we should focus on that shared goal as it has pulled us all together in a way that has enabled us to create something that no other company or group of people has ever been able to accomplish.

We used to joke that our goal was “Total World Domination”, but it really wasn’t a joke. We achieved that goal, Linux really does rule the world. All companies use it, contribute to it, and it has ended up making the world a much better place because of all of us working on it.

In these talks I give, I also say that “the only thing that can stop us is ourselves, it is up to us to mess this up.” And that’s truer now than when I first started saying that a decade ago. There is no other operating system out there that competes against us at this time. It would be nice to have something to compete against, as competition is good, and that drives us to do better, but we can live with this situation for the moment 🙂

These past few months has been a tough one for our community, as it is our community that is fighting from within itself, with prodding from others outside of it. Don’t fall into the cycle of arguing about those “others” in the “Judean People’s Front” when we are the “We’re the People’s Front of Judea!” That is the trap that countless communities have fallen into over the centuries. We all share the same goal, let us never loose sight of that.

So here is my plea to everyone out there. Let’s take a day or two off, rest, relax with friends by sharing a meal, recharge, and then get back to work, to help continue to create a system that the world has never seen the likes of, together.

Personally, I’m going to take my own advice. I’ll be enjoying this week in Edinburgh with many other kernel developers, drinking some good whiskey, and taking some time off of reading email, by spending it with the great friends I have made in this community.

And with that, Linus, I’m handing the kernel tree back to you. You can have the joy of dealing with the merge window 🙂 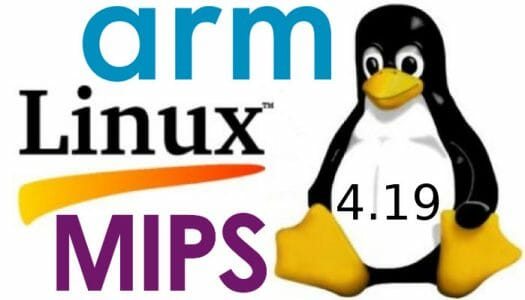 Some of Arm architecture changes include:

Here’s an overview of the main MIPS changes for Linux 4.19:

You’ll find the full Linux 4.19 changelog (comments only) here generated with git log v4.18..v4.19 --stat. Alternatively you could read a summary of changes on KernelNewbies.

Maybe the SYSFS GPIO support for cp2102n went in there?

Now if the driver could also support the 4 gpios on cp2104, and other cp21xx variants…

Thanks for “mansplaining” it to us greg-kh! This is has got to be the most vile and offensive post yet on the linux kernel mailing list. Putting aside the hate speech calling for “world domination”, I also find that it alienates those not Judean. It is also unbelievable the condescending tone that somehow a “wife” makes him a better authority than those with an alternative lifestyle. The final insult is his advocacy of recreational drug use. It is important that we protect our younger developers from the glorification of this type of inappropriate and illegal behavior. For the reasons cited… Read more »

He is just a very naughty boy.

Can anyone explain why Android never used squashfs for the /system partition since it is meant to be read-only ? (OpenWRT has used squashfs-lzma + overlayfs for years…)
Is it because of performance concerns ? (it seems to me it would be more efficient than ext3, + it would enable easy rollback in case of a bad update or virus…). Is there any “easy” way to modify the LineageOS toolchain to achieve that ?