GPD introduced their latest Pocket 2 mini laptop via a crowdfunding campaign last summer. The device packs a Intel Core m3-7y30 Kaby Lake processor coupled with 8GB RAM and 128GB storage, as well as 7″ 1920×1200 display. It’s great if you need an ultra-mobile computer with decent performance, especially it also comes with an HDMI port to connect to a larger display when you sit at a desk, but you’d have to pay around $700 to get one on Amazon, GeekBuying, or other websites.

The company has now launched a cheaper version called “GPD Pocket 2 Amber Black” that goes for $435 and up on Indiegogo.  The design is pretty much the same, but price for this version is quite cheaper thanks to the switch to a Celeron 3965Y processor, and 4GB RAM. Performance will be somewhat lower, but according to the company you’ll also gain 2 hours of battery life despite the higher TDP… 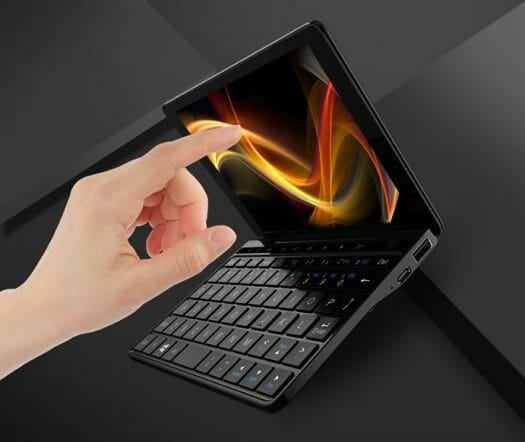 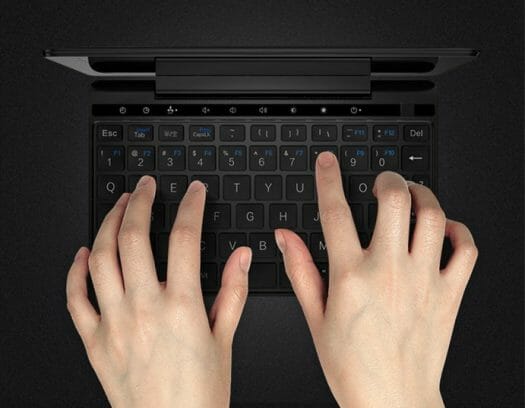 Now if you think $450 is still too expensive, and the Atom x5 in the original GPD Pocket (1) is too under-powered, the company will soon launch GPD MicroPC with an Celeron N4100 Gemini Lake processor, and a 6″ HD display for $299. Features like Ethernet and RS-232 ports make the product especially useful for network engineers and sysadmins, but it may also be suitable to others. I’ll cover it in more details once it launches in February 2019.

When you’ll start getting old, with some issues with your eyes … You’ll no more consider similar devices interesting.

Ah, the micropc might be exactly what I’ve been looking for for a while! It’s true that network engineers need ethernet all the time, and having RS232 in addition would be top! I’ll stay tuned 🙂

It does look like it would be interesting alternative to having a pull out monitor/keyboard in a rack. I think the keyboard would drive you insane pretty quickly though.

No, I’m thinking about a netbook that fits in the pocket without sacrificing connectivity in fact.

Through trial and error I’ve come to the conclusion that notebooks smaller than 10″ are not productive for me, thanks to the kbd. Actually 10″ is already at the border of useful for work.

Based on the pictures here http://manguiro.blogspot.com/2018/12/announce-gpd-micropc-nueva-linea-de.html I doubt the keyboard is of any use.

Hmm indeed, the GPD2’s keyboard seems much better here. But I understand they have to place a pointing device somewhere, and the GPD2 is missing that. I think it should be possible to implement sort of a touch pad made of two linear bands on the device’s border, one vertical on the right for the index, and a horizontal one on the front for the thumb, which would provide X/Y axis pointing. Doing this wouldn’t reduce the keyboard space.

Hmm… Still looks unusable to me especially when thinking about a usage mode without an external mouse (TS mode).

I did the mistake of ordering a laptop without testing it first only once and ended up with a Dell Netbook (to be used as a Hackintosh). Keyboard, trackpad and display were a pain to deal with even with just light vacation use in mind. IMO some concepts don’t scale properly with physical size beyond some ‘natural’ limits.

Wonder how One Netbook One Mix 2s yoga will respond? ( the GPD look a likes )

So does “somewhat lower” [how much lower do you mean? How long is a piece of string?] performance mean the performance is not decent, in other words indecent?

Without quantifying the limits of decency the statements are “nebulous” (le mot de la semaine).

> Performance will be somewhat lower

Those Passmark CPU scores give a good overall impression but as usual for most use cases the ‘Single Thread Rating’ is way more important since most workloads are still single-threaded.