GPD HK launched GPD WIN Windows 10 portable gaming console with a Cherry Trail Atom x7 processor and a 5.5″ display last year on Indiegogo, and while the crowdfunding campaign works very well with over $700,000 raised, the company realized many people just wanted an affordable portable computer, so they removed the joyticks, increased the display size, and upgraded the processor in their GPD Pocket 7″ portable computer powered by an Intel Atom X7-Z8750 SoC and pre-loaded with either Windows 10 Home or Ubuntu 16.04 LTS. 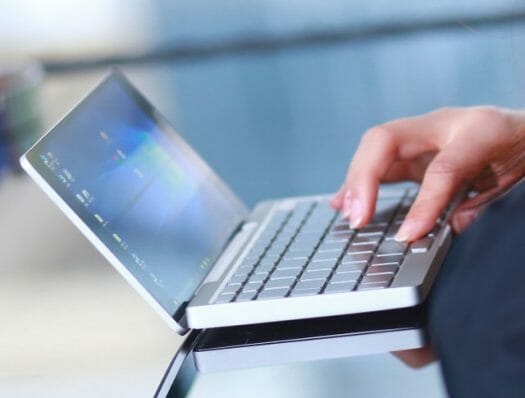 The portable computer will ship with a  5V/2.5A charger (US plug), an international  warranty card good for one year, and a specification sheet. Note that it won’t be fanless, as it’s cooled with a “copper radiator pipe, a large-diameter heat output pipeline”, and and a fan. 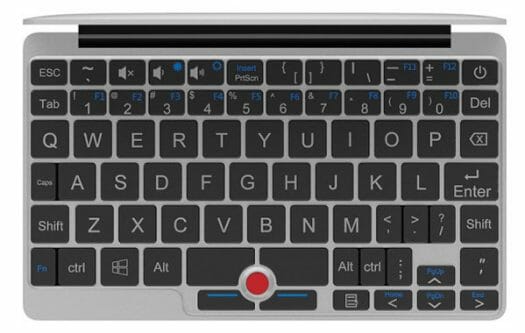 The project has now been launched with a funding goal of $200,000 on Indiegogo, where you can get GPD Pocket with Windows 10 or Ubuntu 16.04 for $399, a $200 discount over the $599 retail price once it becomes broadly available, or so they claim. They also have other rewards including a USB type C hub, and discounts for multiple quantities. Worldwide shipping is included in the price, and delivery is scheduled for June 2017.

That’s a mini HDMI port, not a micro HDMI port, regardless of what they specified.

I’d be more down if it came with an AMD APU. I haven’t bought anything with an intel chip in close to 20 years and I don’t care to start now haha.

@Sander
Yes, it’s a bit expensive, especially when you consider CHUWI Hi13 covered this morning with a much larger and higher resolution display, and slightly faster processor. It still look like they are going to raise enough found.

It’s good to see Ubuntu is now included as an option more often by manufacturers.

What did they do to this poor keyboard? Having a distinct row for stuff like Power/Volume that even includes Esc, but having F-Keys as mode-switched secondary function on the number-keys? How high do you have to be to design stuff like that?

No need to be high, it’s designed in China… ?

Having tried the GPD Win first-hand, my two cents on the predecessor to this product (apparently some things got addressed, to some extent): 1. There’s a reason notebooks don’t go much below 10″ – the screen is way too tiny for textual productivity. Resolution is fine, but glyph size has a minimal optical size for comfortable use, and the tiny screen just does not meet that. Unless you’re ok with 40-column text, of course (my code isn’t). 2. Win10 on a portable is a no-no. Win10 on a portable Atom is a you-must-be-kidding no. Need something to get done on… Read more »

About the 7-inch screen:
1) That’s the size of an iPad mini. And only a bit larger than my Samsung S5.
2) I have an old Samsung Netbook with a 10-inch screen, and that’s just OK for work on the road and on the sofa, including blind-10-finger-typing.
So I’m quite sure a 7-inch screen (& keyboard) won’t work for me.

@TLS
It is a micro-hdmi-port. The hdmi-port is located between the usb-c and the auxillary-port.
Since they wrote its would be a mini-hdmi-port, I think you accidently mistook the two.

But whats the benefit over an 8″ tab + kb case?

@GLSRacer
AMD has nothing in the TDP-range of the Atom

Some corrections:
@Jean-Luc Aufranc (CNXSoft):
Whilst GPD Win was announced as having a Atom X5 SoC, the released version features a Atom X7-Z8700, like the Beelink BT7. Recently they have upgraded it slightly to an Atom X7-Z8750.

So in short, the GPD Pocket features the same hardware as the Win.

The only question is, “Why?”. This is just an undersized, kinda clunky and over priced laptop.

No surprises there considering the GPD Win, that was announced with a Atom X5 SoC but launched with Atom X7-Z8700 (Sorry for the reminder on this again) also recieved the same upgrade, minus the 8 GB ram.

And i have to say, these Cherry Trail’s definitely provide a lot of oomph for what is essentially tablet hardware.

Lol, the crowdfunding campaign is still on-going, but GPD Pocket is already listed on GearBest -> http://www.gearbest.com/tablet-pcs/pp_613003.html
No price yet, just “Arrival Notice”.

@TLS
@Broetchenheld
The company also finally issued a statement about micro/mini HDMI. While the prototype comes with a mini HDMI port, the final product shipped to backer will have a micro HDMI port.

I ordered mine and can’t wait. Im in IT and this is great for my purpose. I need something portable to finish the job. I am not looking to type all day, just something to carry when in emergency and close workorders. I looked at surface (not necessary) This is great for assigning static IP and great for IT Contract Field. Those who are contractors, this is perfect. Price is decent. Get it!

Speaking of Cherry Trail, check out what a certain bgfribox24 coupon can buy you on BG!

Wanna have fanless ARM version of this precious baby. Yeah, layout sucks, especially if you have more than 28 in your alphabet. Anyway, this is as beautiful as hx4700 was.