Following Raspberry Pi form factor, AAEON Up Board powered by an Intel Atom x5-Z8300 processor launched in 2015 for 89 Euros and up via a crowdfunding campaign. Since then, the company switched to Atom x5-Z8350, and now offers for the board for $99 US and up, with for example the 2GB RAM / 16GB flash version going for $109 excluding taxes and shipping.

I’m mentioning this board, as there’s now a crowdfunding campaign for a larger board with similar specifications (x5-Z8350, 2GB RAM, 16GB flash) called ATOMIC Pi, and being offered for just $34 plus shipping by “Team IoT”. This looks too good to be true, but that’s intriguing so let’s have  closer look. 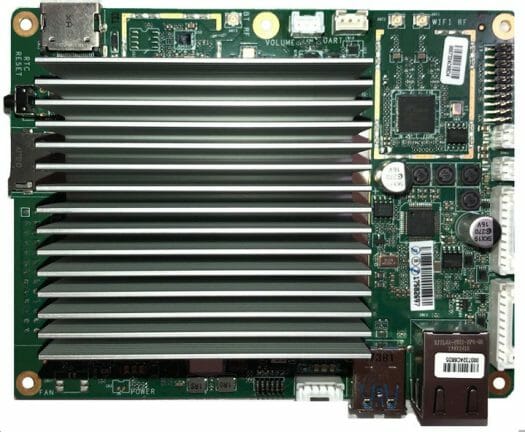 The board will come pre-loaded with Linux, but Windows 10 64-bit is also supported. The datasheet and a quick start guide will be available on AtomicPi.org which now redirects to Digital Loggers website… The short video below shows the ATOMIC Pi works, and runs Kubuntu.

If you pay close attention to the first photo, there’s no power barrel connector, so you’d need to need to wire the power connection yourself, unless you purchase the kit with the breakout shield – also used in the video – which adds screw terminals, a 12V header, and a prototyping area. 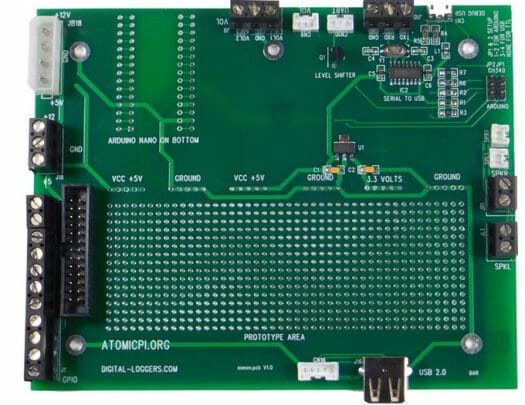 The total cost for Atomic Pi board plus the breakout board is still only $49 plus shipping, which adds $11 to the United States for a total of $60. What if you live outside of the US? Sorry they won’t ship, so your only option would be to go with a US forwarder. What even more interesting is that AAEON, UP board maker, is one of their manufacturing partners along with Qualtech Circuits, and PC Way. Team IoT has managed three earlier KickStarter campaigns in the past, and they did ship to backers. Atomic Pi board appears to be ready, as shipping is scheduled for the end of January 2019.

Thanks to PuceBaboon for the tip.

It looks really inexpensive, but I suspect that once it starts to ship, they will cover costs in extra accessories (cables, power supplies, heat sink, etc) and/or shipping, at least due to the weight imposed by the large heat sink. The specs look pretty close to the up board and should make it a good general purpose board. Just like with the UP board, many users will miss SATA, without which they can’t make a home NAS, and an enclosure. It can very likely help drive some developers to SBCs. I still know some people who don’t want to try… Read more »

I really see the advantage of the x86 that everything, really everything, works out of the box. Many SBCs suffer from poor drivers. Take for instance a Rockchip RK3399 based board. Some come with dual MIPI camera slots, but then only one is supported by their own Linux distribution. So you’ll have to write your own driver. Also, there are not so many high performing SBCs out there today. The RK3399 falls, as far as I can see, behind its potential, maybe because of poor software support. The Atom Z8350 is a very slow Intel CPU, but probably already outperforms… Read more »

> Rockchip RK3399 based board. Some come with dual MIPI camera slots, but then only one is supported by their own Linux distribution. So you’ll have to write your own driver. Why would you need to ‘write a driver’? It should be just a DTS change to get the 2nd CSI camera to work. Now let’s compare with x86. On the UP Board there is one CSI slot but no camera will work there since… Intel: https://forum.up-community.org/discussion/166/mipi-csi-camera I guess that’s the ‘everything, really everything, works out of the box’ x86 experience 😉 Adding to this: my UP Board runs on… Read more »

Thank you, some good information. I wanted to get a RK3399 board but performances seemed a bit disappointing based on benchmarks I’ve seen, and Software better on Rockchip but still sketchy. Is any RK3399 board really recommendable in terms of good software /kernel support? I think SIMD may not be so important since on the RK3399 I could use Neon which may give a similar boost. Yeah, admittedly with the Intel board I thought I could then just use a USB or Ethernet camera. Not exactly the same. Maybe I’ll just splash and get a J5005 NUC as a Christmas… Read more »

> Is any RK3399 board really recommendable in terms of good software /kernel support?

Well, it’s all about the SoC so basically software support situation is the same for every RK3399 board out there as long as you keep in mind that vendor offerings are often horrible (Xunlong / Orange Pi setting the low mark and most probably FriendlyELEC providing the best OS images — I don’t know exactly since I would never use those vendor provided OS images anyway).

And as always: without mentioning the use case it’s a bit hard to tell anything about software support situation.

I do like FrienlyElec’s NanoPI M4. It comes with a large enough heat sink under the board, and uses the same form factor as the UP board while being 15% faster in my build tests, and up to 35% faster once overclocked (which you can’t do on the Atom). However if I absolutely needed an x86, then the UP board would still get my preference for its low power consumption and form factor.

Looks like Intel provide a driver that they certify for their partners. This is pretty much how it works for every vendor.

>since otherwise a lot of the SBC stuff wouldn’t work: github.com/emutex/ubilinux-kernel/commits/upboard-4.9

Looks like an MFD driver and some other bits for their hardware. You could probably just rebase to 4.10, then 4.11 etc until you find a point where a conflict happens and use that version until you can be bothered to fix it.

>‘SBC with typical SBC use cases in mind‘

It was only about the ‘everything, really everything, works out of the box’ with x86 claim which is unfortunately not the case with somewhat recent low-power Intel offerings. And yeah, it was about GPIO, SPI, CSI, whatever — the ‘typical SBC use cases’.

My own use cases usually differ (energy efficient server/NAS stuff) and once cpufreq/DVFS, networking and storage is working the platform is ok. So with this use case in mind my UP board or this board here will also run fine with Linux mainline or *BSD.

>And yeah, it was about GPIO, SPI, CSI, whatever — the ‘typical SBC use cases’.

I think if there was interest then there could a driver for the Intel CSI block that works with other cameras. For my own use case on the Odroid H2 I’ll just have a cortex M0 as an I2C slave for the embedded interfaces. Most of the current SBCs are based on TV box/Smart phone SoCs that are pretty limited in that area too (i.e. no ADCs or only one ADC for reading resistor ladder multiplied keys) so it’s not a big difference.

Yeah, that’s what I’d be doing as well, a powerful SBC for computing (Robotics for fun, like running a localization/SLAM algorithm or some computer vision) and then a second embedded device (Arduino is fine for me) to connect motors and sensors. The H2 would have been perfect, but sold out too quickly 😉

Make sure you use a 3.3v arduino. 🙂
I have two H2s. Seems really good so far. Nice to be able to boot a stock debian kernel and have everything work instead of adding yet another branch to my linux fork that I’m afraid to merge master into. Only downsides so far is that it doesn’t seem possible to have the bios redirected to serial, so the earliest you get access is grub, and that 32GB of DDR4 for each of them was about $600 🙁

Be careful Johannes. You’ll unleash the intel hating downvote beast that roams these getting upset by comments.

If you don’t need the gpio, dev add-on etc, why not just buy a whole case, heat sink etc retail?

At that price, just buy hardkernel x86 board, unless u specifically need low power. no crappy atom processor.

The x86 boards are unfortunately very rare, Hardkernel sold out and Lattepanda Delta not there yet. Lattepanda Alpha or Udoo Bolt quite expensive and therefore not comparable. I wish more boards will come in that price range around $100-$150, but Intel also has a shortage of CPUs at the moment, so it doesn’t look too good.

Really interesting at that price, it indeed comes with the enclosure, and I would say a stackable enclosure, as if you want to make a cluster, you can easily stack 10 of them on top of each other.

It’s impressive and a bit sad that their Windows version is cheaper than the Linux one by the way :-/

why in the hell do i need a 5 volt powersupply to run this thing rofl . why not make things 100 times easier on the consumer and just make it work via usb c for power

Because USB-C power delivery is quite expensive? That said, 12V would’ve been a better choice imho.

Or 19V so cheap laptop supplies could be used.

i have previous AEEON mini boards with Intel Atom x5-Z8350 4GB RAM and 32GB storage. Now we have sometning devided into two. Form me electronic rubbish

Ghhhhm… Much variants with Atom in this price. Wintel CX-W8 for example and more TV-boxes. Not clear benefits besides “prototype area”. Controversial thing

Now shipping outside US on Amazon

I do have concern about breakout board and it seem the traces are not wide enough to support end device. it’s too narrow.