While Intel has been outing low cost and low power processors with less than 10W TDP over the years with their Bay Trail, Cherry Trail, Braswell, Apollo Lake, and now Gemini Lake processors, AMD has not really ventured into the low power space, and the latest announcements about 10-12W processors was for their Embedded G-Series J Family, which I have not seen in many products.

The latest x86 UDOO board – dubbed UDOO BOLT – will be one of the rare AMD development boards available on the market with pricing starting at $229. 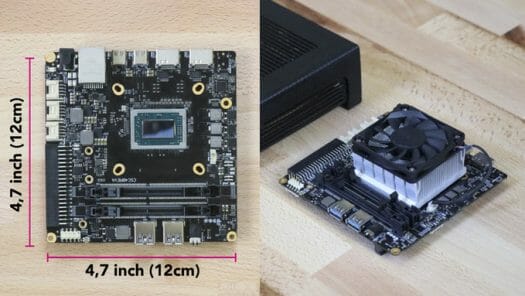 The company claims the board will run any 64-bit Linux distributions or Windows 10. You won’t have any big compatibility issues like with some Arm  boards, but based on my experience with low cost Intel platform, Linux support is not always 100% guaranteed. Maybe it will be different with AMD. You can program the Arduino part directly from the board using Arduino IDE just like most other UDOO boards. 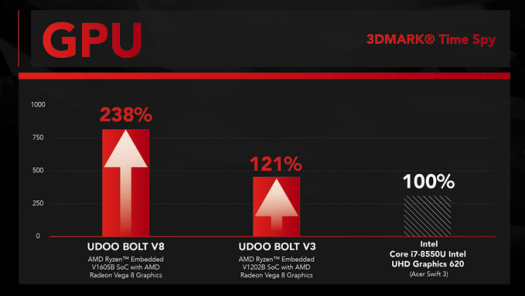 One of the main benefit of such AMD SoC over Intel competitors is the much improved graphics performance of Radeon Vega 8 Graphics over Intel UHD graphics as shown above especially for the V1605B SKU.

UDOO BOLT does deliver much better performance than the development board / single board computer I normally cover here, but it should come at the cost over higher power consumption with a 12W-25W TDP processor. It might be interesting to compare it to something like NVIDIA Jetson TX2 devkit.

Great marketing team behind the campaign! They managed to use the word ‘maker’ 23 times on their Kickstarter page to advertise this Mini PC. 🙂

Robotics seems like a great use case for a device without battery connector and needing either a 19V PSU or at least one conforming to USB PD profile 3 (36W) or 4 (60W) when powering through USB-C.

Also does anyone know why there’s an RTL8111G on the board if these Ryzen CPUs contain 2 x 1 or even 10 GbE controllers? Is the RTL8111 PCIe or RGMII attached here?

The RTL8111G should just be a PHY, which is required to use the integrated Ethernet controller. This is the same as it would be on an Intel based system with integrated Ethernet. They could obviously have chosen a different PHY from Intel, Marvell, Broadcom or Qualcomm for example, but Realtek is cheaper. For 10Gbps they’d need a 10Gbps PHY and they’re not cheap. My guess would be around $20-30 if they went with Aquantia, more for Intel or Marvell. I don’t know any x86/64 CPU/SoC that features an integrated PHY and even most ARM processors don’t have it.

10GbE sadly looks to be a mistake on the campaign page rather than a feature we’ll see on this board, as I’ve corrected on the original article following a message I received from an Udoo engineer I know:

I never noticed any mention of 10 GbE on the campaign page. I could just see Gigabit Ethernet in the specs. Maybe they corrected it before I started to cover their board.

Ah, that should’ve been a reply to tkaiser’s comment apparently. It was mentioned somewhere on the campaign (or on their site?), but got corrected later then…

I think it’s the case that the APU supports two 10GigE ports but that this board has only hooked up and enabled a single 1GigE port.