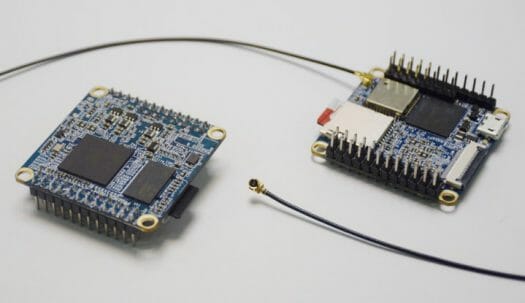 NanoPi NEO Air comes with two different storage configuration (8GB or 32GB flash), but tinyDebian did not provide the full specifications of the board, so tinyWiFi-5G board specifications below are preliminary:

The company points to FriendlyArm Wiki for documentation, so the board – including WiFi – must be working out of the box with the original NanoPi Neo Air Ubuntu 16.04 firmware image. If not, you may have to install a specific driver for RTL8821CS.

Getting 5GHz will cost you however, as provided they only use an 8GB eMMC flash, tinyWiFi-5G board is sold for $59 on Tindie, meaning you pay over $30 extra for the new wireless module, and that does not take into account the $19 asked for DHL shipping. Furthermore, If you take a close look at the photos on Tindie website, you’ll find out they did not even bother to take photos of their own board, and instead, are using NanoPi NEO Air photos with an AP6212 module. Hopefully, the price will come down, as they aren’t that many compact low-cost boards with 5GHz WiFi.

“tinyWiFi-5G” … to me, “5G” means 5th generation mobile communication. The successor of 3G and 4G
So confusing or even misleading it’s used for plain 5 GHz WiFi. Oh … wait, is this the consequence of the new Wifi naming scheme, like “802.11ac technology will now be referred to as Wi-Fi 5”?

5G is 5Ghz wifi and it has been in common use for a decade.

It is easy to tell apart, the 5G cellular stuff has two more zeros at the end of its price tag.

Thanks for your helping clarification.

How many concurrent wi-fi connections can be maintained?

a bit expensive for just some tiny A7 board with Wifi 5 Ghz.

But y a realtek module? And for this price…

This board is for quick prototyping purpose.

If you plan ahead you can make a single PCB that allows all three configurations via population options during production.

Hi, thanks for your comments. I am the developer. This board is for quick prototyping purpose. I priced this board thinking I can NOT sell much. I did put in some efforts making WiFi driver work and make this board easy to use. One example, because its tiny form factor, there is no Ethernet, our software provides USB Ethernet, so you can ssh into the board via USB Ethernet.

For me it’s a perfect validation of the opensource hardware model : someone has an idea, and can push it to production by reusing someone else’s work, without causing negative competition since the limited industrialization abilities keep the price tag much higher. I just think they should have talked to F.E. to see if there was any option to upgrade the initial design at a lower price (maybe they tried).

With that said, I wouldn’t put $80 into a cortex-A7 based design nowadays.

The question is where they have found the sources file!
I only have seen the PDFs of the schematic.

I wonder whether they are not purchasing existing NanoPi Neo boards, and reworking them to add the 5GHz radio instead of the existing 2.4GHz one? Would possibly explain the high cost (and how they could do this without the board layout files).

I wonder what this whole blog post is about?

Some entity calling themselves software developers sells some hardware on Tindie they can neither show a photo of nor provide any documentation for. This entity according to Tindie sold 1 item already: https://www.tindie.com/stores/tinydebian/ — there’s zero indication that something to be called ‘a product’ exists or works.

I think that is what they are duing right now!
I have found that the Wireless module have a “standard” pinout. So they are simply swapping things.

> I think that is what they are duing right now!

It’s clearly described at their Tindie page: ‘It is based on NanoPi Neo Air, and we replace WiFi chip to be RTL8821CS to make it 5GHz capable’.

Now only a use case, firmware BLOBs and a driver are needed… and a lot of trust into a seller not being able to show a picture of the mod he made…

I am the developer. Thanks for all your comments. Indeed replacing the 5GHz WiFi chip is simple, but integrating device driver (SDIO based) to work is more difficult. I am the first one who came up with this idea, I took some risks that I may not be able to get it working, either soldering or software driver problems or for some other strange reasons.

This is for quick prototyping purpose.

But USB dongle is a bit bigger and making the whole system clumsier. Do you want to put USB dongle on a drone to transmit video?

> Do you want to put USB dongle on a drone to transmit video?

Edimax just works and it is small. I don’t need 2×2 MIMO for a print server.