The board however does not come with an Ethernet port, so people wanting to get H6 with Gigabit Etheret and USB 3.0 will need to wait a little longer. Orange Pi Lite2 is sold for $25 plus shipping on Aliexpress. 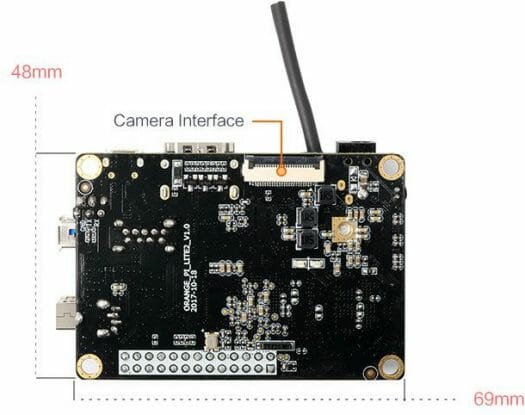 The company provides Android, Ubuntu, and Debian for the board, but as mentioned for Orange Pi One Plus, Allwinner H6 is pretty new, so if you plan to use Linux, expect some initial pain… The images will eventually be one Orange Pi resources pages, and I can see the company release Android 7.1 firmware & SDK, tools, and a “user’s manual” for Allwinner H6. I’d expect Allwinner H6 to be supported by Armbian in a few months.

At least they didn’t hobble the damned thing with that craptastic XR819 WiFi part. X-D

Someone needs to club Allwinner/XRadio up alongside the head over that and get them to at least NDA someone in the Community to fix the firmware, if possible, and give out enough bits and bobs to re-work the Craptacular driver that’s out in the wild so that at least it can recover crashes, etc. better.

How would this chip compare to the AllWinner H3 used in the Orange Pi One or an Amlogic S805? I’m looking to replace some hardware cheaply, if they release an Ethernet Model with USB 3.0 and it has at least a moderate improvement in performance, I would be interested

Does the Allwinner H6 have MIPI-CSI? According to the V200 datasheet it only has Parallel CSI interface.

The Display is MIPI-DSI

There is no MIPI at all on this chip. Camera is CSI, Display is RGB parallel or HDMI. Which is why it has 451 balls. MIPI camera and display would eliminate 100 pins. A better use of those 100 pins would be to make the memory bus wider.

@Jon Smirl
You are correct. No MIPI on the chip.

Wider memory bus would be good.

i miss the opi2 (my fav opi board) design with the heat sink mounting holes.
After complaining for soo long about the terrible thermal, why wont xunlong listen and design the board with a heat sink addon mounting holes.

@TC
All Orange Pi use exactly this barrel plug (4.0/1.7mm, centre positive) starting even with the first A20 models more than 3 years ago. Only exceptions are the various Zero models where Micro USB is used. But so far all OPi could also be powered through GPIO header (pins 4 and 6) without any drawbacks. No idea whether this still applies to One Plus and Lite2.

@tkaiser The 4.0×1.7 plug is a tradition among sunxi boards, from cubieboard, to banana pi, then to orange pi.

Wow! Any info about max USB 3.0 speed that can be achieved on this board? Together with Cypress FX3 this can be base for whole new range of cheap and capable DIY logic analysers, SDRs, oscilloscopes etc.

@Adam I have a H6 board with Linux on it and USB3 brought up. How to benchmark USB3? I have a USB3 HDD (not SSD so cannot show the maximum performance of USB3)

Icenowy Zheng :
How to benchmark USB3?

Most simple test would be to use an SSD with high IOPS values and capable of +500MB/s behind an UASP capable SATA bridge. Then test with iozone or better fio with various queue depths. This should give a good estimate about what’s possible. But if it’s just the usual DesignWare USB3 implementation then performance should be on par with RK3328/ROCK64 (read as: really great)

@Icenowy Zheng That’s good news! Hopefully @Xalius finds some time on the weekend to give it a try with a decent performing SSD. BTW: I compared yesterday some Geekbench 4.1/4.2 numbers from Zidoo H6 Pro and Beelink GS1 with other ARMv8 devices and by looking at the real performance numbers we can assume that latest Allwinner BSP really allows for H6 being clocked at up to 1.8 GHz with single threaded workloads (when all 4 cores are busy at the same time the performance scores indicate that frequency capping to ~1.5GHz occurs. I only took those performance scores into account… Read more »

Can you Please provide me the Quick Startup Guide and also Information for the Orange Pi Lite 2 H6 1GB Quad Core Development Board. 1. I need to Download Format Tool and Reimage? for the SanDisk Ultra 32Gb Micro USB Memory Card, but I don’t know which one of the Format Tool Software such as TF Formatter or BalenaEtcher for the Windows 10 64 Bit. 2. I need to Download a program for the Orange Pi or Orange Pi will not Boot Up without installing the Driver Updates and Operating System, But I don’t know which Driver and Operating System… Read more »

Vertical Tablet Settings out-of-reach, this board is useless! ? Whose software operates it?? ( The Makers Dropped Support a month after it was released! )