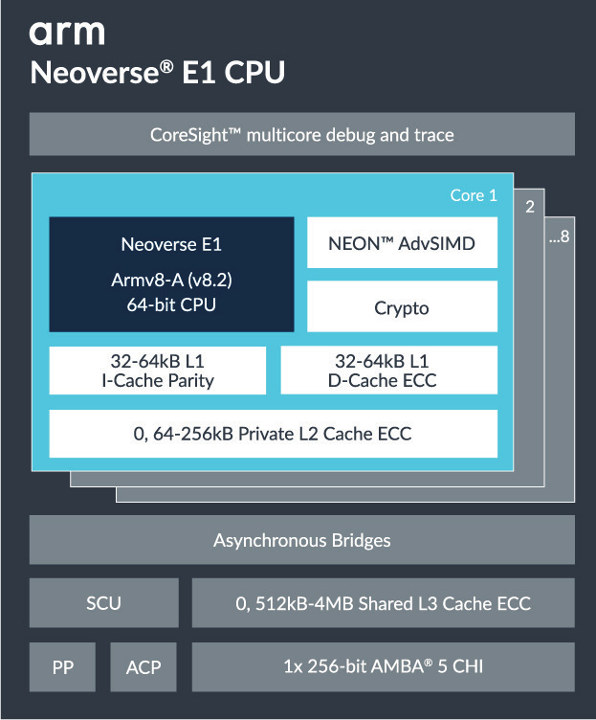 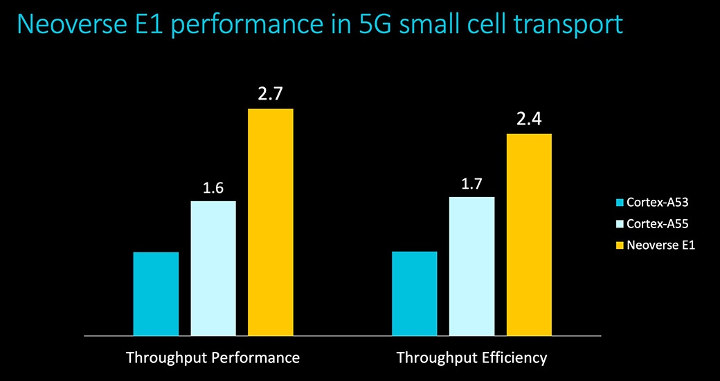 Arm developed a 5G small cell transport software prototype which simulates packet processing workloads at a 5G base station in order to evaluate the platform and found Neoverse E1 to boost throughput performance by 2.7 times over Cortex-A53, and throughput efficiency by 2.4 times.

More details can be found in the announcement’s blog post and the product page. 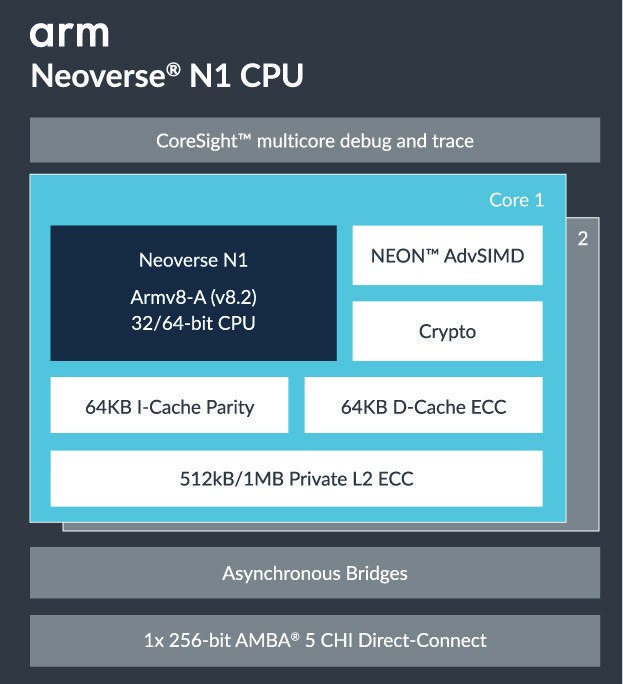 The Arm Neoverse N1 Platform comprises the N1 CPU and supporting
system IP connected via a coherent mesh interconnect. It is optimized for low-latency and bandwidth efficiency and targets sub-35W 8-core systems up to 128+ core in servers targeting 5G deployment, data analytics, and machine learning.

Arm found Neoverse N1 to be significantly faster than Arm Cortex A72 in typical server workloads: 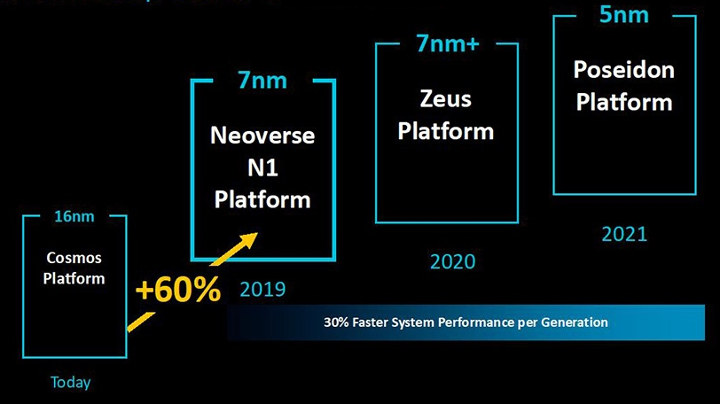 So Neoverse N1 – previously known as Ares – delivers at least 60% performance over Arm Cortex A72 at the same frequency, and the roadmap shows the company’s Zeus & Poseidon platforms will deliver 30% performance improvement per year with the latter manufactured using a 5nm process in 2021.

We may already know at least one part based on Neoverse N1, as Hisilicon Hi1620 processor was announced with 64 Ares cores at the end of last year.

You may want to visit Neoverse N1’s developer page and announcement for more details.

Arm really needed something positioned between the little CA53/55 and the big cores, and E1 seems like it. Smart move.

AdvSIMD is the official name. At least it should be 🙂

Yeah 🙂 The first time I heard Neon was as the name of the AdvSIMD unit in Cortex-A8. I can’t say if that was the project name for the instruction set, or just the codename of the RTL block. Anyway everyone now uses Neon even internally.

The important thing is we’re at neon2 now ; )

Actually what’s the point of comparing the E1 with A53/55 only? And why they need SMT to get some performance most likely below an A75? I’m confused, is it just to be more modern, more vulnerable to spectre? Don’t serm to get it. And otoh N1 seems not to rely on SMT…

Actually E1 takes over dataplane tasks which were formerly (erm, currently) handled by CA72s. Apparently higher counts of lower single-thread-performance E1s are better suited for the task. Which is understandable — as soon as you meet the latency requirements (which are still out of CA55’s league) of the task, you want to maximize the throughput, and that means more cores and SMT.

A lot of code dealing with packet processing is in fact very simple and more dependent on frequency than on the ability to parallelize instructions. When you parse a packet you spend time incrementing offsets, comparing values and jumping. An A53/A55 there will not be far below an A72 on this task. And accesses are quickly memory-bound. So it makes sense to use a larger number of dumber cores, with SMT to improve the execution unit’s usage while waiting for memory. I really think that this approach makes a lot of sense.

Interesting thanks for the explanations!