Most 3D printers on the market work with filaments using fused deposition modeling (FDM) technology, but in the past we’ve also seen 3D printers using resin and stereolithography apparatus (SLA) technology. The latter is supposed to enable more detailed, yet faster prints, but storing and keeping the liquid resin is a bit more challenging than simply handling filament.

In the past I had come across two resin 3D printers in the news, namely the infamous Peachy printer, and the $99 ONO 3D printer working with a smartphone, which was introduced in 2016, but the company is still working on the printer, and most backers have not received their rewards. But today, I’ve come across another resin 3D printer with Alfawise W10 that’s available  for $299.99 plus a few dollars for shipping. 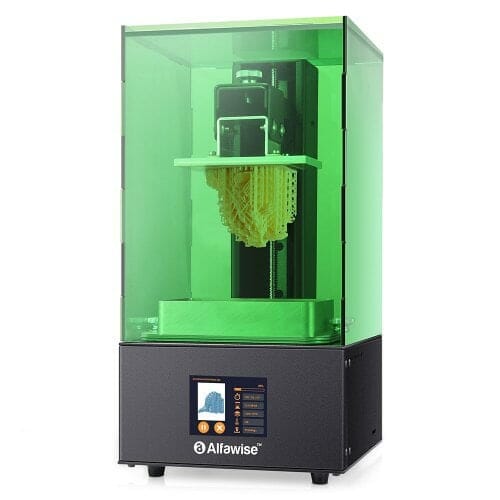 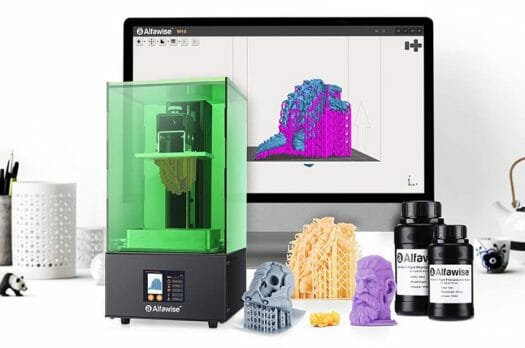 Printing speed is expressed differently than for filament based 3D printers, and as I understand it 30mm/hour means you can print a 3cm height object in one hour.

Bit misleading, It is just a LCD 3d printer, I’d thought that we are at a point where you could buy true SLA 3d printer for 300usd

Question of the day :
Who made this 3D printer ?
Can support this 3D printer ?
We have others which we know who mades and support, but so far, I don’t see any information about support and maker name, don’t have website ?

I’m not sure who makes it, but it’s sold under the Alfawise brand. They have their own website, but seem to have a close relationship with GearBest. When I wrote about it, it was only listed on GearBest. Now I can see a product page has been added to the official website but not much more info, and they link to GearBest to purchase the 3D printer.

Good day to you all, this Alfawise W10 was made by a company named, Longer 3D, even on the Longer3D Website you find the exact same machine except they use an orange perspex/acrylic cover for it and they named it the Orange-10… Also on the box i recived the Alfawise W10 in, had the Longer 3D LOGO on the outside packaging. There’s limited support for this resin printer, cant find a firmware anywhere or to even attempt to try making it more easier to use like with using Octoprint/Alphaprint etc and maybe even having it wireless defeating the need for… Read more »