Most Android TV box ship with simple heatsink, which may lead to performance degradation due to throttling if you push your device a little too hard, and Ugoos UT3s was one of the few Android TV boxes to feature a fan. The company now have a new model model with Ugoos UT4 powered by Rockchip RK3368 octa-core processor, and they’ve sent me an early sample for review. Today, I’ll start by taking pictures of the device, and taking it apart to check the hardware and how cooling is implemented, before reviewed the unit in a few weeks.

Before this, since I’ve only shortly mention Ugoos UT4 in Rockchip RK3368 TV boxes list, I’ll go through the specifications:

I received the device in its retail package, but they had to cover “Quad core” with “Octa core”. This should probably be fixed once the device ships to end users. 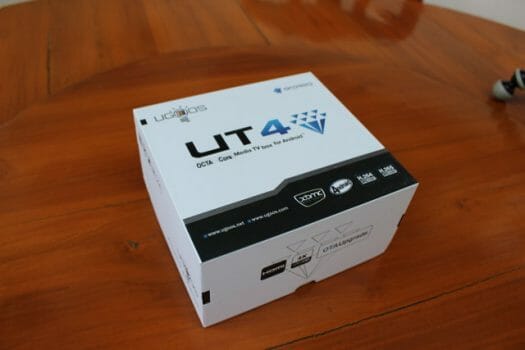 A 5V/3A power supply, a flat HDMI cable (Ugoos branded), an high gain WiFi antenna, a short USB cable (for OTG), an IR remote control, and a user’s manual in English are included with the box. The remote looks exactly the same as the one included with GeekBox replacing blue keys by orange ones, and a different branding.

The devices looks to be made of ABS plastic. One of the side has the WiFi antenna connector, some ventilation holes, and a power button, with the others featuring a 3.5mm AV output hack, a recovery pin hole, a micro SD slot, and two USB ports, including one supporting OTG. The rear panel comes with Gigabit Ethernet, two more USB ports, HDMI 2..0 output, optical S/PDIF and the power jack.

You can also to watch the unboxing video.

I had to loosen four screw on the bottom of the case to open UT4. It was easy, and there are no easily breakable clips holding the two plastic parts together. 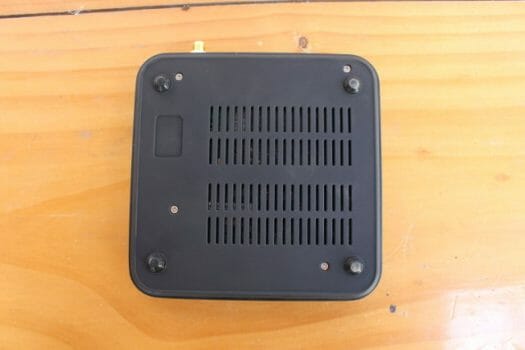 You can then easily take the board out as no other screws are holding it in place.

I had not read about the device in details before taking it apart so I was quite surprised to find a fan inside the device. There’s also a small battery for the RTC on top of what must be the WiFi module. The fan, heatsink and battery are all glued to the board, so I did not tried to remove or displace them before the review. Mnova MS00731NL transformer confirms Gigabit Ethernet is implemented in the device, Samsung KLMAG2WEMB-B031 eMMC 5.0 flash provides internal storage with 170MB/s and 11 MB/s theoretical read and write speeds, and USB hub chip is also included.

If you are interested in hacking the board, two I2C and two UART connector footprint can be found on the side of the board.

I’d like to thanks Ugoos for providing a sample for review. If you are a distributor, and are interested in buying in quantity, you may find out more and/or contact the company via Ugoos UT4 product page. I could not find the device listed on the usual e-retailers, but for reference Ugoos UT3s (2GB/16GB) with  is now sold for $119 shipped, so I’d expect UT4 to be slightly cheaper. [Update: Ugoos UT4 sells for $103.90 on Ugoos Aliexpress store]

Did you get also the AM1?