Together with Ugoos UT4 octa-core Android mini PC, Ugoos sent me Ugoos AM1 TV box based on Amlogic S905 quad core Cortex A53 processor. There are basically two category of products with S905: entry level with 1GB RAM, and 8GB flash, which represents the majority of devices on the market, and mid range with 2GB RAM, 16 GB eMMC flash, 802.11ac WiFi and Gigabit Ethernet with devices such as MINIX NEO U1 or Tronsmart Vega S95 Telos. Ugoos AM1 is part of the second category so it will be interesting to compare its performance to the other two. But in the meantime, I’ve taken some pictures of the media player and its board to find out more about the hardware design.

Ugoos AM1 Unboxing Pictures and Video

All new Ugoos devices look alike, and even the retail package follows the same theme across their new devices. 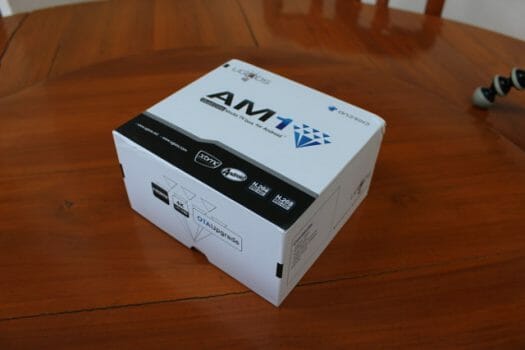 I got a blue (cyan?) colored TV box which shipped with a flat HDMI cable, a 12V/3A (36W!) power supply, a high-gain WiFi antenna, an IR remote control, a USB cable for OTG/firmware update, and a user’s manual in English.

Apart from the different color Ugoos AM1 looks exactly the same as Ugoos UT4. But the ports and connectors are a bit different too. One side include some ventilation holes and the antenna connector, while the other includes two USB 2.0 host ports and a full-size SD card slot. The antenna connector was a bit loose, so I had to tighten with plier a little to make sure the antenna stays in place.

Usually, I’m only interested in opening a device to find out more about the design, but with the sample I received I could hear something was loose inside, and that picked my interest further. The bottom of the case as a large hole for the recovery button, so you would not need to use a toothpiclk, and even a sharp pencil could be used for firmware flashing. The only thing you need to do to open the case is to remove the four screws, and the bottom cover will come up easily. 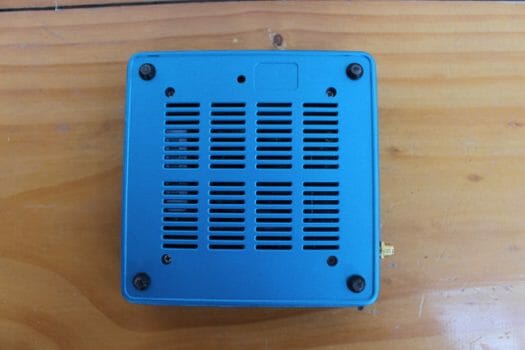 The bottom of the board has two hardly readable Samsung memory chips, and the recovery button. We can also find a sticker with a MAC address suffixed with 20:18:0E which looks up to Shenzhen Sunchip Technology.

I could then take out the board from the case easily without have to loosened any screws, or bend any clips, and I discovered that the loose part was a metallic shield with the heatsink, which had fallen out during transport… The factory should probably add a bit of solder to that shield…

There’s also JM20329 USB to SATA bridge, because yes, there’s a SATA connector inside the device, but it’s not exposed to the outside. 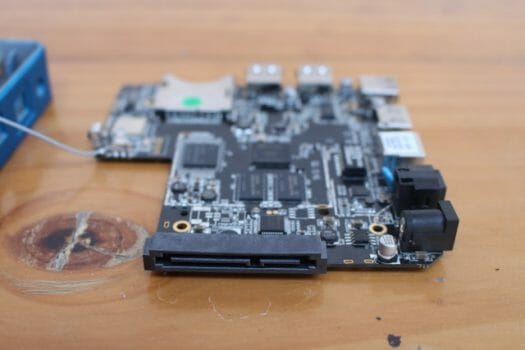 It’s quite likely they’ll remove this when shipping to end users to cut costs, but this really looks familiar… and indeed it’s the exact same board as found in Tronsmart Vega S95 Telos, but instead of using an internal WiFi antenna, they opted for an external antenna, and the case is also a little different. 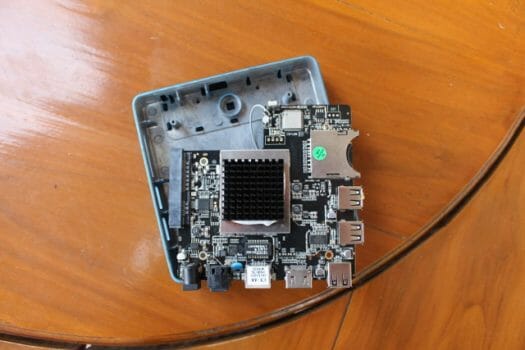 I could re-insert the shield back into the metal clips on the board, so now it’s ready for review :).

Distributors and resellers willing to purchase in quantities may contact Ugoos via Ugoos AM1 product page. Individuals can purchase Ugoos AM1 on Ugoos Aliexpress Store for $89.90 with free shipping. [Update: Now also on GeekBuying for $87.99]

New firmware with new launcher, and fix to wake up from sleep / power off. http://ugoos.net/blog/AM1-amlogic-ugoos-update-root-ugoos-launcher.

I’ll use that for review.