I’ve just found out Amlogic is working on S905X3, S905Y3, and S905D3 quad-core Arm Cortex-A55 processor, coupled with an AI processor normally used for voice recognition in TV boxes, following the introduction of Amlogic S905X2, S905Y2, and S905D2 processors last year, all based on the older and time-tested Arm Cortex-A53 cores.

Arm Cortex A55 was announced together with Arm Cortex A75 processor as the first core compatible with DynamIQ processing, and so far we’ve seen a few Arm Cortex-A55 cores but mostly combined with Cortex-A75. Amlogic S905D3, S905X3, and S905Y3 change all that. 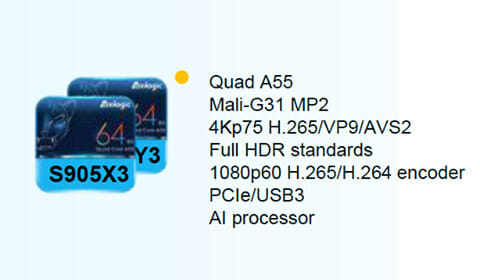 We have very few details at this stage, except the new processors will have many of the same features as the S905X2/Y2/D2 models including an Arm Mali-G31 MP2 GPU, HDMI 2.1 up to 4Kp75 resolution and HDR support, 4K H.265, VP9, and AVS2 video decoding, Full HD H.265/H.264 encoding, as well as PCIe and USB 3.0 support. The “AI processor” is extra and likely the same 2.5/5.0 TOPS neural network accelerator as found in the upcoming Amlogic S922D processor.

A forum thread on Khadas forums reveals Amlogic S905D3 is also coming and should be an upgrade to Amlogic S905D2 processor, which we still don’t know much about, but the previous S905D model was specifically designed for set-top box with dual independent tuners.

Amlogic S905X3 TV boxes are also coming, and that’s a LinkedIn post about an Amlogic quad-core Cortex-A55 TV box that made me research more about the subject. The Elebao “X3” TV box above will feature the new processor, but we do not have more details at this stage.

The new processors are expected to launch later this year, as is Amlogic S805X2 processor for low-cost full HD TV boxes with “next-generation CPU and GPU”.

It should become available next month.

Great news! I was hoping for a cortex A55 version, i wish they delayed the chip though and added an AV1 hardware decoder.

A55 is not that much faster than A53. Memory load store changed but not much else performance wise. AV1 is “yet another spec” that would throw away all of the open source work done for H.265 H.264 and VP9 for the current VPU should Amlogic need to change the entire hardware block rather than add a hardware block. They need to overhaul the patent system around the world before people can adopt a license-free open video codec. What Amlogic should build is a Cortex A7x CPU with 64-bit DDR interface, DisplayPort, and 4-8 PCI Express lanes. DDR clocks have hit… Read more »

What Amlogic need is a S922x derivative that gives Linux driven 4-8 PCI Express lanes like Da XuU says but they must be PC Nvidia, AMD Graphics card compatible inc power voltage etc. Also PC DDR memory bank slots. It is not about taking on Intel or AMD, it is about the dawn of arm mini desktops They have the potential to be the next arm market. In My Own Opinion, those that have open minds eye, to see, are very aware Amlogic SoC have opened several new potential markets, beyond voice command home systems. Also ” That changes with… Read more »

PCI-E would be for accelerators, FPGAs, NVMe home storage, and other stuff in non-critical applications. GPU on ARM doesn’t make sense when you have cheaper and ready to go x86 solutions. AMD has a stranglehold on this market with their APU and Linux amdgpu drivers that cost way less than an equivalent ARM platform. If anything, you would want your GPU to be integrated rather than on PCI-E on ARM systems.

64-bit DDR and DP are necessary for Chromebooks, Type C, 4K, 8K, and endpoint applications where the volume is.

Private L2 should be a notable change, though.

I know A55 has it configurable but is there any documentation where SoC states they allocated die space for private L2?

Thanks. I did not have the full document, only the screenshot in the post.

awesome news
@admin could you do a very indepth review about the socs when the documentation becomes available ?

I’ll post about it once the datasheet and other documents become available.
For hardware reviews, I’ll do as well provided I can get hold of a hardware sample.

The T series is for TV and projectors.