MediaTek is working on a new dual core Cortex A7 processor that supports OpenWrt and targets AC1900 WiFi routers. That’s what I learned from a tweet by WidoraIoT detailing the main features of MediaTek MT7629 SoC as shown in the table below. 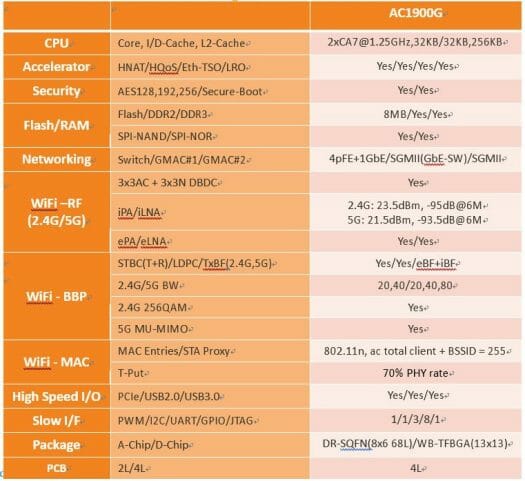 A web search mostly shows code commits to Linux and U-boot, and we learn a few extra details such as MT7629 shares the same PCIe IP block as MT7622 dual core Cortex-A53 processor. It also reveals a forum post on Widora website with a table detailing the benefits of the upcoming processor. 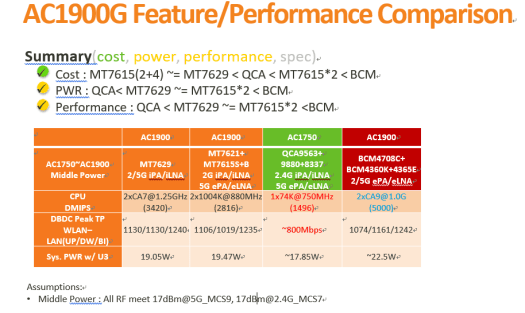 As I understand it, MT7629 is a solution that offers about the same power consumption and performance compared to a solution based on MT7615S and MT7615B WiFi PCIe chips plus MT7621 MIPS processor, but at a lower cost.

Another U-boot commit message indicates MediaTek engineers are working on mainline U-boot and Linux kernel for the processor. That’s about all I could find at this stage, so we will have to wait a little longer to get the full details.

[Update: A new slide shows more details about the chip including support for 2.5 GbE and external RF chips.

MTK is most likely not interested in competing on the cutting edge any more, as they simply can’t offer competitive products to Broadcom and Qualcomm. However, they’re doing quite well in the mid-range and entry level, which is where the volume market is.

They already announced a dedicated 802.11ax chip 3 months ago if i recall.

This should allow for some very low cost 802.11ac routers/mesh APs.
The PCIe interface would allow for 802.11ax support and with 2.5Gbps supported we might see this in some higher-end products too. Seems odd to move back to a pair of Cortex-A7 cores, when their previous product had two Cortex-A53 cores…

It is very much like a product that has been cost-down based on the MT7622.