As usual it takes a while before the company finalize their design and software support, but LS1028A has started to appear at least in one hardware platform that’s supposed to launch this quarter (Q2 2019): MicroSys miriac MPX-LS1028A system-on-module. 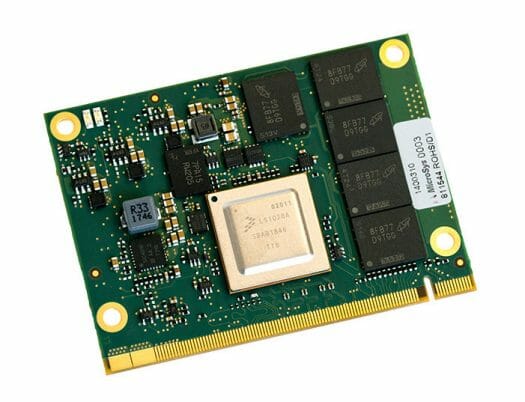 The board supports Linux, and MicroSys Microware OS-9 real-time OS is planned for Q3 2019 with support for the open source OPC UA-TSN project aiming to provide a unified standard for industrial automation and IIoT connectivity.

I had never heard about Microware OS-9, but it’s not exactly new as according to Wikipedia, the first version of the real-time system “OS-9 Level One” was written back in 1979–80 in assembly language for the Motorola 6809 CPU. However, since February 2013 Microware OS‐9 is owned by a partnership of three companies, MicroSys, Freestation(Japan) and RTSI (USA) who formed Microware LP to actively continue the development on OS‐9, and recent developments provide support for e.g. ARM Cortex A CPU series integrated for example in NXPs Layerscape LS1043A, LS1046A or LS1088A CPU.

There’s no price information for miriac MPX-LS1028A system-on-module, and limit number of samples are available through the company’s early access program. miriac SBC-LS1028A development kit which includes a SoM, carrier board, Linux BSP, and accessories should also become available, but not details are provided about the kit. More information may eventually be added to the product page.