Danjuliodesigns llc. A boutique embedded systems design firm run by engineer and inventor Dan Julio has set up crowdfunding for the makerPower Solar power supply/charger for intelligent power supply just about anywhere and in any climate. A comprehensive device structured to IoT and embedded systems, where sometimes a remote camera or other device needs power all the time. The power source is a solar panel which can charge a standard lead-acid battery (USA availability only) 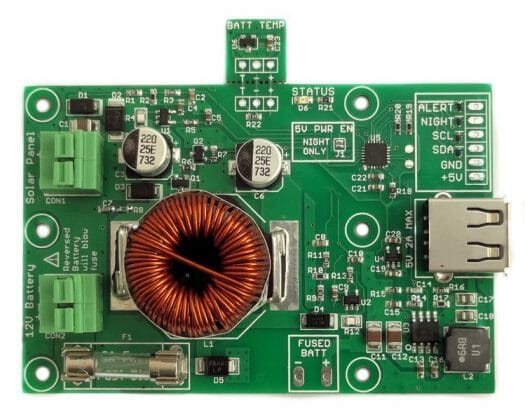 We reported on a solar input board PiJuice battery HAT and although there are other solar input devices on the market, such as the PiJuice, for use with SBC’s such as Raspberry Pi, the makerPower Solar functions at a higher level, incorporating intelligent power control and functioning. The board can be source powered by solar panel through a standard lead-acid battery, rather than a Li-Po or Li-Ion. 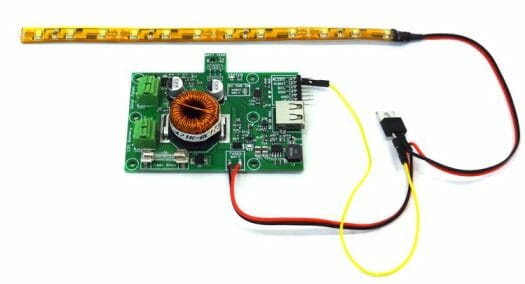 The inventor felt a source should carry as much power as possible and the Li-Po or Li-Ion battery would not produce enough power to sustain a wide variety of devices, function in almost all types of climates and overall cost less than other batteries. The solar panel would be a 36-cell, 12V board that produces 5V and up to 2A to run sensors and other devices. There is a maximum power-point transfer converter (MPPT) providing optimal charging through dynamic perturb and observe. 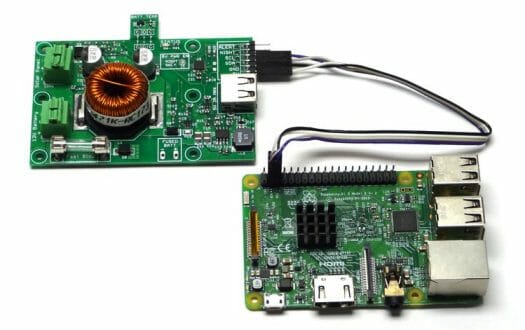 The software includes Arduino libraries and Linux Daemon for configurations other than what is already present, data logging, remote access, and the auto-shutdown/watchdog support, which are optional, but very handy for those windy mountainous terrains. The board can be connected to the solar panel, battery and board as follows –

The single board is going for $40 on Crowd Supply, $75 for the dual-board bundle, and $130 for the entire system: board, wiring kit and a 35W solar panel.  The information found here was provided in part by Hackster.io.

> The inventor felt a source should carry as much power as possible and the Li-Po or Li-Ion battery would not produce enough power to sustain a wide variety of devices This claim is a bit strange. There are pros and cons to different types of batteries, but for the same size, Li has more energy and more power. Even more per weight. Also given this power supply only delivers 10W (5V/2A), in terms of power (since it was the argument provided), basically any battery will fit, starting with the tiniest single cell 200mAh LiPo 20C discharge! I’ve run a… Read more »

Interesting points. Perhaps the idea behind the monstrous energy in the lead acid battery is that it can last longer on cloudy weeks. Also, old lead acid batteries are commonly found free or cheap in old cars.

That’s a good point, and one benefit of lithium batteries for a solar system is that their charge is endothermic. This is interesting for a solar application because the charge happens when the weather is sunny and outside is hot. Thus knowing the battery cools down during charge when it’s hot outside is reassuring.

There are still parts of the world that have sustained temperatures at or below freezing for part of the year.

Typical LiIon batteries shouldn’t be charged near or below freezing.

Have your lipo packs held up well to being outside in the heat and being fully charged for a long time?
The cheap RC packs don’t seem to like being used as bulk energy storage in my experience and turn in sausages after a few weeks of being warm and/or fully charged.

Yes, they were not the cheap blue lipo packs with fake capacity, but some I assembled myself from LG batteries. They’re still perfectly fine. What died first was the camera that I found linked to right here two years ago 🙂 Also I tend to limit the high voltage to 4.0 or 4.1V. This considerably increases the number of charge cycles (around x10 per 0.1V below the limit).

Have you tested their internal resistance? I think 18650 cells can be deceptive on what condition they are in because the metal can doesn’t let them puff up and the IR increasing probably isn’t noticeable with low discharge rates.

No I have not checked, but since I put little strain on them I’m not much worried. What lithium batteries really don’t like is excessive charge, excessive discharge, and excessive current in either direction.

Note that there is a current-limited tap to the battery, which means that system can support another 30-40W load.

40W solar pannel is a minimum for a 2W device 24/24H to survive to cloudy day.
I prefer one lipo cell, so i prefer 6 cell solar pannel (OV = 4.2V max, Vmppt = 3.3V) as we can find efficient sync boost converter ultra cheap for usb charger from lipo.
In addition it’s more efficient to split power on the day directly from solar pannel 3.3V to 5V and 3.3V to lipo voltage for charging instead charging lipo and after discharging to 5V, 15% effiency gain is always profitable