Vecow makes its latest entry into the industrial 4.0 and AIoT application market place with the announcement of the Whiskey Lake-UE based EMBC – 3000 3.5″ SBC and the SPC 5200 slim fanless computer system.  The units are extremely similar, and it would seem the EMBC-3000 is inside the SPC-5200, so there are several options for the system features and setups. Whiskey Lake-UE processors, such as Core i7-8665UE, are the embedded, long-lifespan version of Whiskey Lake-U processors.

Vecow has a long history in the embedded industrial computing industry, going back to 2011. Their latest embedded systems are a 3.5 form-factor SBC, the EMBC-3000 and the SPC-5200 slim build embedded computer, both built around the 8th Gen Whiskey Lake-UE processors with 15W TDPs.  The EMBC-3000 are available with i-series or Celeron processors.

The EMBC-3000 has been developed with machine vision and AGV (Automated Guided Vehicles) in mind, for use in factories, warehouses, distribution centers and other places where there is human and non-human interaction, like M2M, or M2H environments. The applications include factory-automation, intelligent control, and AVG/AGR.  The uses span a wide range of industrial 4.0 and AIoT applications as well. 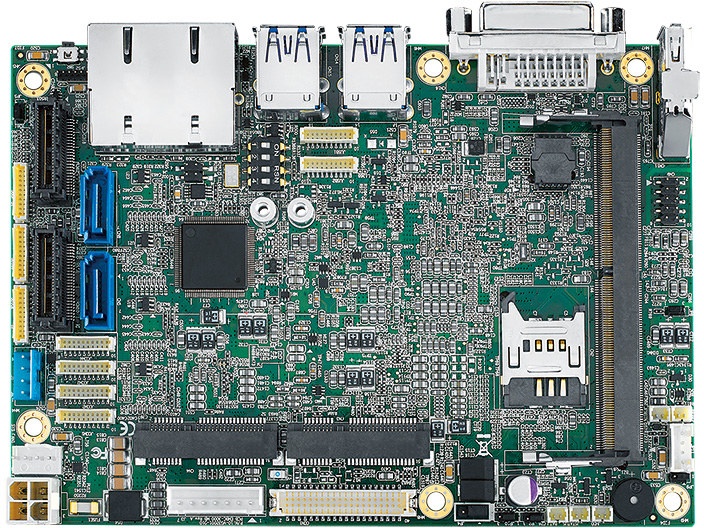 The SPC 5200 is a slimline fanless computer system, meant to be used inside other devices or as a stand-alone industrial device. There is a slightly lower operating range for the SPC-5200 -40°C to 70° C.  The dimensions are slightly bigger than the EMBC-3000 due to the enclosure,  246.1 x 53.8 x 44.0mm and there are shock absorption and vibration resistance, which are important during vehicle applications.

There is no pricing or ship date as of yet, for either the EMBC-3000 or the SPC-5200. You may find further details on the respective product pages. The information found in this article was provided in part by the Linuxgizmos article for the two hardware platforms.

It’s not surprising for products meant to be embedded into other ones, and only seen as basic components. It’s similar to when Intel or AMD presents a new CPU on stage, the guy just holds the CPU between his fingers, without the huge heat sink and fan that most often come with it.

I suspect we’re facing quite an expensive niche product here. Just seeing the amount of small-size or special connectors makes me think that the total cost of connectors is probably higher than the price of a full SBC at some competitors.

When I was looking for a mini-itx board with a V1605b I did fill the price inquiry form at a few of these industrial boards web sites. The average price was around $500. I would venture a guess of $1500 for the boxes. To my surprise they really did not care if you are an individual, they were ready to sell. Just have a corporate ID number ready for their purchase order paperwork. I used the one from a friend. I ended up buying a DFI for about $480 because I really wanted to try the V1605b.

@theguyuk Good catch. I agree this Chatreey S1-A320 looks pretty good. Maybe I should have mentioned my purpose: build a DIY NAS with multi-ten TB of storage in RAID10, serving at 10+ Gbe, with a power envelop close to 50W. The Chatreey and all these mini-PC boxes or boards built around a low desktop CPU or APU do not make the cut for such purpose. My minimal requirements are at least 1 x PCIe 3 x8 slot, at least 4 x SATA 6Gbe, at least an M.2 M Key PCIe 3 x4 for boot/OS SSD, eMMC is an acceptable alternative,… Read more »

True but the running and electric costs factor in too

Why is it that this site and one other (I forget the name of “Linux Something or another” constantly report on interesting SBC’s and other goodies but 80% of the time they list no price? It drives me nuts! Can they not ask or maybe fill out a form to get an estimated price? I can’t believe that so many vendors are keeping the price for their latest and greatest a friggin secret?

Not that I’ll be able to afford this but I’d be nice to know what existing products it’ll be priced around if nothing else.

The other site must be LinuxGizmos. If a company reports the price we normally write about it, and for B2C board it will always be listed, but most B2B boards won’t have a public price. There should be several reasons for it. One may be because they don’t want competitors to see how much they charge, and the other is that most B2B projects have different requirements in terms of volume and customizations so there’s no fixed price. Publishers can’t ask price because then it would be made public, and for whatever reasons most – although not all – embedded… Read more »

Yes Jean-Luc is 100% right and industrial boards is not a good solution for individuals like us: you pay the max (read crazy) price when buying one or two boards. In B2B deals the number of items is in the dozens, hundreds or thousands units and the unit price becomes much smaller. Note that the same thing happens in many other parts of this industry, the pricing of $11,000+ for a top of the top Intel Xeon Scalable Platinum is also for individual buying by the unit. Data centers or large organizations buying hundreds or thousands units will never pay… Read more »