Back in March, I was tipped about AAEON’s upcoming UP Xtreme Whiskey Lake board equipped with Intel’s latest 15W processors, and providing a boost in performance compared to their previous UP boards, including UP Squared board introduced in 2016 with a choice of Apollo Lake processors.

The company has now finally launched a Kickstarter campaign to let the public pledge for UP Xtreme SBC for €249 and up.

The board has a fair amount of expansion include the 100-pin high-speed bus that was used to add networking, AI accelerators, and FPGA expansion cards to UP Core Plus board. Sadly, the high-speed bus on UP Xtreme SBC has a slightly different pinout, so some expansion cards will be incompatible. AAEON provided a compatibility matrix.

You’ll eventually find documentation in the Wiki, and get support in the forums. The board being a 64-bit x86 platform you can pretty much run any operating system you want including Windows 10, Linux distributions like Ubuntu or Debian. You may however have to select a specifically supported OS for some specific features like STM32 MCU real-time control or Myriad X deep-learning accelerators. 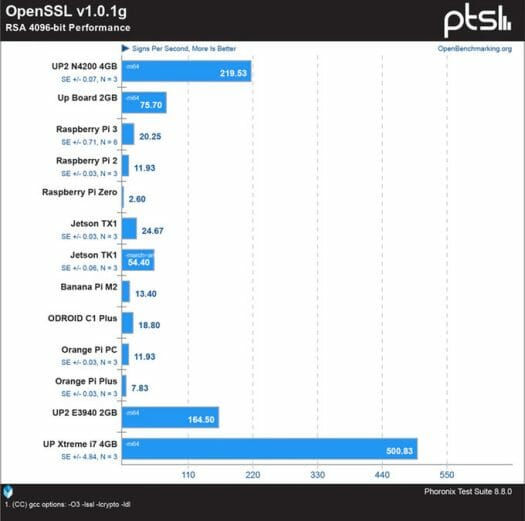 AAEON also shared a few benchmarks to compare the performance of UP Xtreme Core-i7 model against UP Squared boards and the original UP Board. The Whiskey Lake-U SBC is over twice as fast as the Pentium N4200 Apollo Lake board, and close to 7 times faster than the company’s first board. Please do not compare the results again Arm boards such as Raspberry Pi 3 in this comparison chart because Phoronix OpenSSL benchmark does not set the compilation flags to enable hardware crypto on Armv8.

AAEON went with a 10,000 Euros funding target in this crowdfunding campaign which should be easy to match. Rewards start at €249 for the Celeron board with 4GB memory, and a 19V power supply, and up to €949 for the AI Pro Kit UP Extreme 2 featuring the Core-i7 board with 16GB RAM, a 19 V power supply, a 128GB SSD, a wireless module with WiFi 5 and Bluetooth 5.2, the fanless chassis, and one UP AI Core deep-learning accelerator with heatsink. Shipping adds €29 to €59 depending on the selected perk, and backers should expect their rewards in September or October 2019.

Have I currently read? CEC over HDMI ??!? Can we finally can control an intel Platform thru CEC protocol (tv remote, AVR, etc?)

This seems to be copy&paste from AAEON’s datasheet which shows a surprisingly low level of accuracy. It’s a Key M slot with two lanes only for 2280 cards and if the block diagram is correct then there’s no SATA here but the separate mPCIe slot can be turned into mSATA.

Surely this is a worse typo.. unless they have some sort of super muxing that can put 28 gpios and all of that other junk onto 4 pins.

Msata is dead mini pcie also kind of dead why the heck they dont use the connectivity for useful connectors? A second m.2 m or one with all 4 lanes populated? To use all the lanes you have to order all sorts of unusual adapters from aliexpress…