Kids can easily build theirs own computer and then learn more about electronics and programming thanks to Piper Computer Kit 2.

The kit is based on Raspberry Pi 3 SBC, a 9″ display, a power bank, and all bits and pieces required for assembly. There’s also a 16GB microSD with the OS and the company’s PiperCode software to learn the basics of programming.

The complete kit comes with the following items:

This is whay it looks like after around two hours of assembly time. 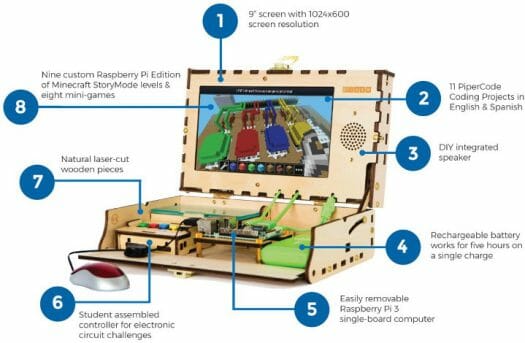 Kids can then start playing Raspberry Pi Edition Mineccraft and some mini-games, and get started with PiPerCode projects first using Google’s Blocky drag and drop language before migrating to Python as they progress.

We found out about Piper Computer Kit v2 via a post by Liliputing, and Brad Linder also met with the founder in the video below where we can learn more about the project.

You’ll find more details in the official website, and the kit can be purchased on Amazon for $299. They are also Piper Computer Kit v2 bundles for educators in the main website.

Lol, I’d think it be made of gold for that price. I don’t understand how this can be even more than $150. Well, someone will buy it…

Yes, always someone who tries to screw money out of the “education ” market. I agree that this should sell for $150 or so