IoT Team launched the $34 Atomic Pi SBC powered by an Intel Atom x5-Z8350 processor via a Kickstarter campaign last December. At the time, it only ships to the US, and looked too good to be true. But the thing is real coming from a failed robotics project, and the low-cost x86 board went back for sale via Amazon and other channels with worldwide availability last spring.

The price has even gone a bit lower as you’ll find it for $32.95 on Amazon. Note that it requires some technical skills to get started and with 16GB eMMC flash it only supports Liux distributions such as Ubuntu 18.04, and installing Windows 10 is possible, but you’ll be seriously limited. 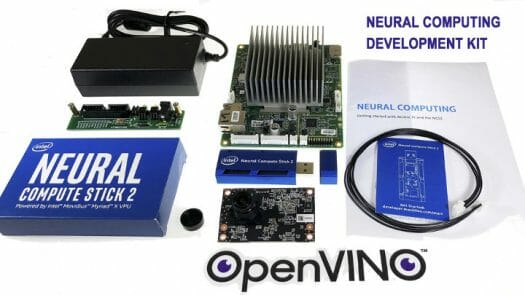 Atomic Pi is back in the news, as IoT Team has now launched another Kickstarter campaign for the board, except it’s not sold standalone, but instead as part of a $99 neural computing development kit that combines Atomic Pi SBC with 2GB RAM and 16GB eMMC flash preloaded with Ubuntu and Intel OpenVino, Intel Neural Compute Stick 2 (FYR $68.99 on Amazon), a power board & 5V/5A power supply, as well as a “smart” camera and cables.

There’s also a getting started guide. There’s no actual demo of OpenVino on Atomic Pi, but the short Intel video below shows what’s possible to do with OpenVino.

The $99 price tag is really impressive, but only available for the early bird deal (200 pieces), and shipping adds $12 to the US which is the only country the kit will ship to. After all the early birds rewards are gone, a $129 pledge will get you the board with free shipping, again to the US only, and currently there’s no way to get it outside of the US unless you use a friend or a US forwarder. The neural computing development kit is expected to ship in November 2019. 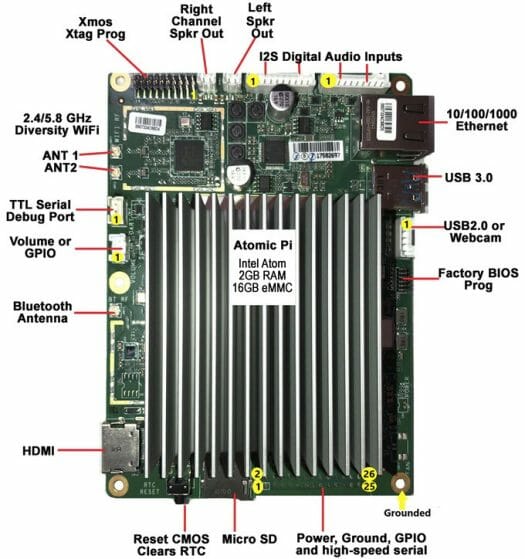 Oh my, ROTFL. You got to admit they’ve got some strange alien kind of stamina to do yet another run of this thing. I guess the warehouse of dead robots is still not fully empty.