Well-known developer,  Keith Packard has recently announced the launch of “picolibc” through his blog.  Picolibc is a C Library for embedded systems which  is suitable for small micro-controllers, and this standard C library API’s allows to run even in low memory (RAM) devices. This is an upgraded version of “newlib-nano” with few interesting changes which includes replacement of “stdio” lib with ATMEL-specific printf code adopted from avrlibc. As part of this library, Keith also launched picocrt,  which is responsible for initializing memory and invoking various constructors before calling its own C program, the main function.

Picolibc uses the meson build system to compile the source tree for various hardware platforms on a Linux host using GCC. Apart from the default parameters,  this library allows to build with multiple attributes for enabling and disabling various functionalities by using the attribute line” -D=”.

Even though Picolibc is running on small stdio library from avrlibc, user having the option to enable old newlibc’s stdio lib by using the attribute (newlib-tinystdio=false). By default, it will be newlib-tinystdio=true, means it will get compiled with small avrlibc based stdio.

Before starting to build picolibc, you have to make sure that meson build system is part of your build environment, please refer to meson setup instructions.

As meson standard, all build configurations for cross-compilation build is part of separate configuration files, which is part of the source tree. Below the sample config file for various build environments.

The source tree itself provides scripts to configure, for various targets, includes riscv, arm, x86, etc. Below the sample compile script for the target arm.

And once you are ready with the meson and desired cross-compiler gcc lib environment, follow the steps to build picolibc with a specific target (for arm). My test build environment was ubuntu 18.04.

Once it’s built successfully,  you can verify by running the sample test case applications for printf and scanf in the “test” directory which is part of the build folder. 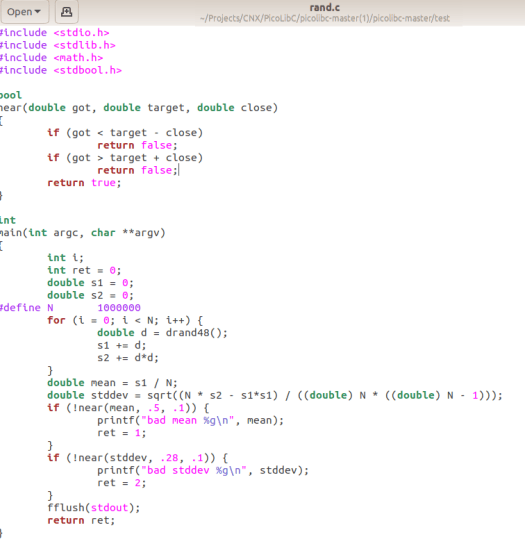 Picolibc uses the GCC.spec file to compile source code. This will set the system header file path and the linker to point Picolibc.  Below the example to compile a single file and generate a .o file:

I hope this triggers a bit of a revival in these libraries (newlib, lwip etc). Everyone seems to use them, no one seems to maintain them.

I think the main problem is the industry. I am originally from the web. Compared the web world, embedded is a lot of closed source. There is also a missing mind-set for open source contributions. This is slowly coming. Probably with new people joining the industry. Projects like Arduino, RIOT OS or Platform IO give me some hope. Just takes some time.

Embedded is broken because vendors behave like gollum with their “IP” even though a good chunk of it isn’t theirs. I think so much of the market moving from in-house cores to ARM has made it even worse. They can’t publish stuff knowing that it’s only useful on their chips so they do stupid stuff like adding fixes for GCC in their own private builds behind an NDA-wall. At $DAYJOB I’ve been waiting on fixes in a library that is shipped as a binary for about 6 months now. I reverse engineered the library and told them where the issue… Read more »