Sheevaplug is a Linux plug computer powered by Marvell Kirkwood 6281 ARM9 processor that was launched in 2009 with Ubuntu 9.04. As the name implies, Sheevaplug looks like a power adapter that’s plug directly into your mains socket, but it’s actually a headless computer, i.e. without video output, and instead coming with a USB port, Gigabit Ethernet, and an SD card slot. The device got fairly popular at the time, so it ended up in several hardware projects, and was supported by a long list of open source software projects as you’ll find out in the Wikipedia page.

Ten years have passed, and Globalscale Technologies has just introduced an upgraded version with the Sheeva64 plug computer based on the same Marvell ARMADA 3720 dual core Armv8 processor as found in ESPRESSOBin board. 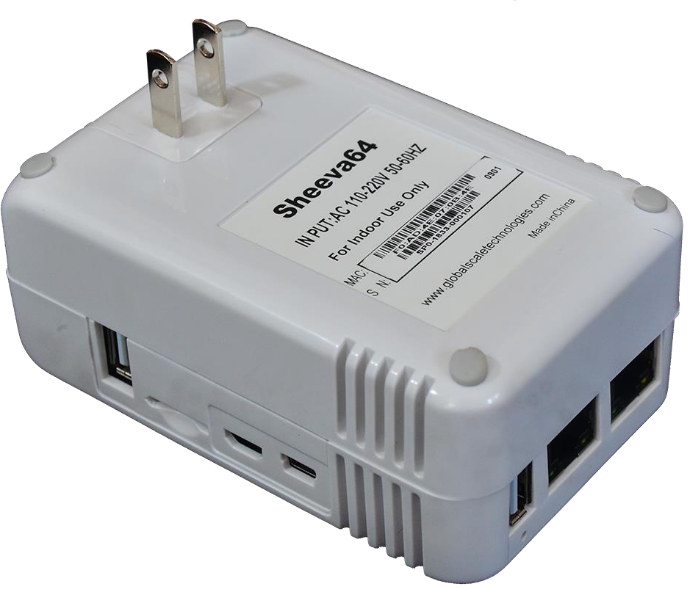 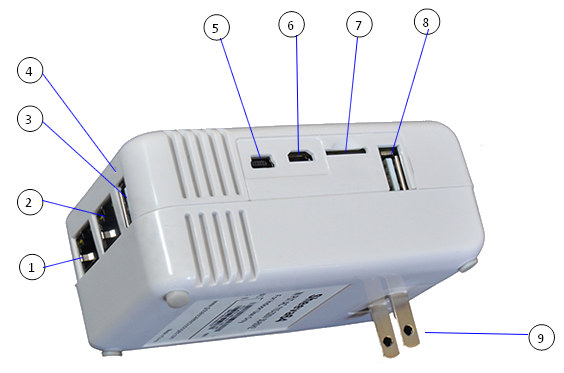 The Sheeva64 plug computer ships with Ubuntu 18.04 pre-loaded, and for debugging the company recommends a PC running Fedora 14 or greater as they provide binary drivers for the FTDI device in the plug computer.

The device ships with a a Cat 5e Ethernet cable, a mini USB to USB cable, an AC power cord, and a warranty card. Wait.. What? An AC power cord? Yes, as it looks like the 2-prong plug can be removed, and you can insert a standard power cord instead. They also mention an internal SATA cable in the list of accessories, but the specifications and block diagram below do not show any SATA interface. 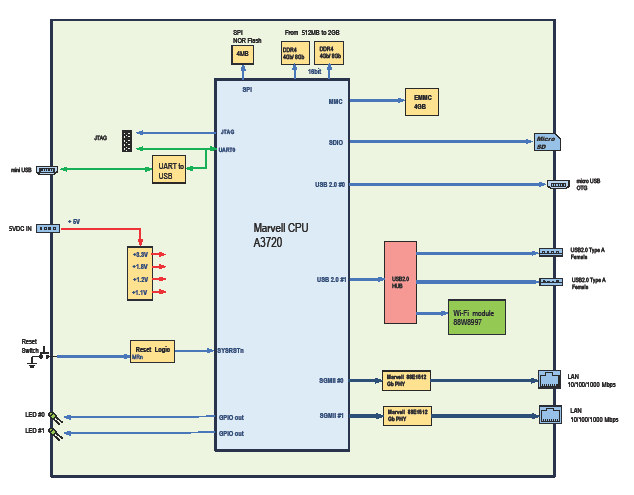 The plug computer will start shipping in April 2019, but you can pre-order now without credit card for $89 on the product page. Make sure you don’t enter your credit card details, and select “pre-order” or you’ll be charged.

Thanks to Willy and Adam for the tip.

It’s 2 x USB2 (Hi-Speed) behind an internal USB2 hub. That’s almost as crappy as with the Raspberry Pi at least with ‘NAS use case’ in mind.

I’m seeing them as 5V output 🙂

Indeed, unfortunately these devices never provided the female power plug connector to compensate for the mains plug they confiscate. It took 10 years to CPL devices to do this. I would have expected the new sheevaplug to adapt to this as well, but no. Thus at least we have the 5V output that can be used to charge whatever as a small compensation for the lost mains plug 🙂

No USB3.0 no Sata port…crappy product

And quite expensive too. I’m planning to get the new Odroid N2 for that price and it’s way more advanced than this.

> planning to get the new Odroid N2 for that price

Interesting approach… price first and then use case?

There is a document with some info linked to on their product page as well: https://www.globalscaletechnologies.com/download/Sheeva64-Quick-Start%20Guide-01312019.pdf i thought there were problems with power overloads if the power passsthru was allowed as willy mentions. You can’t guarantee what someone will plug into you in that mode. I’d not use this in any role where there was anything flammable nearby anyway. Just to be safe. I’m not sure why one would plug in something like this and want NAS as a usecase. the other thing that is interesting is there is a configuration which says the SATA is bootable, whatever that would… Read more »

They are also proud of their OSG + JVM sd card. Any suggestions on what scenario that would be useful for, with a plug computer?

They’ve been promoting this since at least the Mirabox, when Java was dead. Maybe someone had fun with them telling them it was resurrected ?

I know of products that are based on OSGI and Java.. Armada 370 stuff that’s shipped in millions of units.

OK so with this they are sending a secret signal to their customer that they can consider upgrading the hardware platform now. I’m still having difficulties imagining any valid use case, but industry is often full of surprises.

Interesting that the hardware appears to be similar to lower end pfsense appliances sold by Netgate.
I wonder whether it will be possible to have pfsense running on those.

But the device featured in this post is the same SoC, is it not?
So in theory at least, if someone took on themselves, the task to compile pfsense sources, it should work fine, no?
Obviously Netgate themselves won’t do it as it will hurt their sales, but surely someone could do it?

> Obviously Netgate themselves won’t do it as it will hurt their sales, but surely someone could do it? Netgate brought FreeBSD to Armada 37×0 (yeah, same SoC as in Sheeva64 and Turris MOX) so you could buy their SG-1100 as an appreciation instead of trying to hack the Sheeva64 😉 And of course SG-1100 should just be an EspressoBin + some ‘Microchip® CryptoAuthentication’ thing (see last paragraph in link above). But I wonder how they manage to get that nice throughput values (according to block diagram the internal Topaz switch is still connected just via RGMII to the SoC… Read more »

Well, to list a few reasons why I find that attractive (correction not to hack the Sheeva64, which I understand is open as far as OS choice goes, but to hack the pfense sources). 1. Such a system would save my customers quite a bit of money. 2. In my practice I have many clients who just need a basic lan/wan firewall and it would be great to have them on Pfsense which I know and love. SG-1100 is just too big/expensive for their needs. 3. More often then not, I use pfsense not even as a firewall, but just… Read more »

Good luck with your approach, especially since it seems you work for free? You still will end up ‘hacking Sheeva64’ since the troublesome part on ARM is getting things to boot and set the hardware up reliably. With x86 almost everyone accepted that there’s proprietary closed source software mainboard manufacturers license (called BIOS and UEFI) to bring up the hardware. With ARM you’re on your own until stuff like Server Base System Architecture (SBSA) is available everywhere. No idea what GlobalScale put on the SPI NOR flash this time but in the past what they provided was rubbish. While I… Read more »

The truth is, I was wrong about Netgate. After some googling, I found that they are actually trying to port Pfsense to arm platform themselves. They do want to charge a certain fee for the access to their images once this is ready , which is fine as I am concerned. On your question, obviously I charge for my efforts, but I am not sure why it is wrong to take a bunch of open source code and charge clients money for its use? There is nothing in the licenses that forbids that as far as I know. In the… Read more »

It’s mostly a matter of ecosystem. There are still some idealists who think that opensource works thanks to people working for free. That’s wrong. Projects on which people work for free exist for the 3 years the author is a student with free time, then disappear once he/she has to find a job. The reality is that projects that last are backed by companies who manage to cover their development costs with their sales or services. Ideally you have several companies around a project but very often there’s a single. In this regard I find it very important to contribute… Read more »

Sure, it is important to support open sources projects we use. On a personal level, I can say that I did contribute to the Pfsense in some ways (including even some minor code submission). I also participated in their presentation at one of FreeBDScons, bought their book and generally am trying to move every client I know to use their platform (which is to their benefit as much as it is to mine). After all, as their product becomes more popular, they will get more income as well (even if not directly). When there is a need and the client… Read more »

> Lets admit, 190$ for their cheapest hardware option is way overpriced for what it does. This is precisely where there is often a flaw in the reasoning. Overpriced regarding what criterion ? Regarding the fact that the customer at the end of the chain will never value the added service this much? Compared to alternate solutions that are readily available ? Compared to solutions you can make yourself (in this case is your time investment covered by the savings) ? A product price includes 4 main components : – the hardware costs – the R&D costs needed to support… Read more »

The price on this just seems too high in the age of $35 SBCs, unless you had a specific use-case that needed the dual Ethernet. It doesn’t even have a three-prong plug, which would provide a lot more stability in the wall outlet than the 2-prongs they’ve used.