We’ve covered a fair amount of mini laptops with 7″ to 9″ displays in the last few years, but most came with a fairly high price due to the somewhat high specs with Amber Lake or Gemini Lake processors, 8GB+ RAM, 128GB+ storage, etc… meaning in most cases you’d have to pay between $500 and $1,000 for a small device.

If you’d like to have such a mini laptop for simple tasks but don’t quite want to spend that much money on it, Pretech F700Mi Mini laptop with a 7″ display should be much cheaper thanks to an Intel Atom X5-Z8350 quad-core processor, 4GB RAM, and 32GB to 128GB storage. 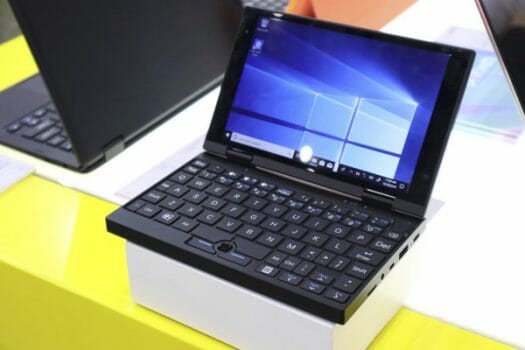 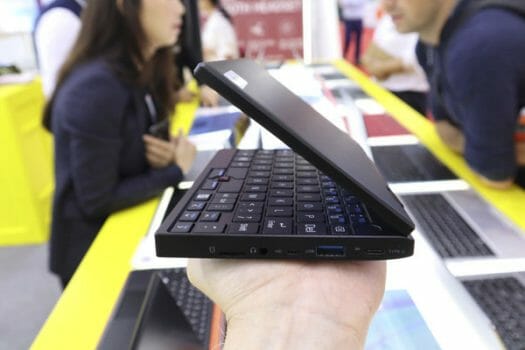 This Windows 10 laptop is fanless, and there’s a small grid positioned on the bottom to dissipate the heat. Intel Atom x5-Z8350 processor is a low-end processor found in the $35 Atomic Pi SBC, so the good news is that the Pretech F700Mi Mini should be fairly cheap once it comes out maybe around $200-$250 retail in its default configuration.

But obviously don’t expect to use the mini laptop as a laptop replacement with multi-tasking in mind since it will be painfully, but for simple tasks like remote logging over SSH or VNC, it should be just fine at a much lower cost than other mini laptops currently on the market. 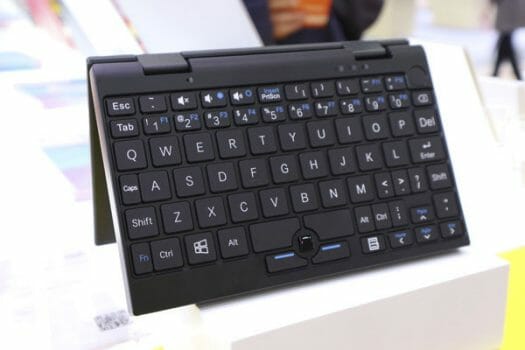 The specifications and photos above all come from Notebook Italia who met with Pretech at the Hong Kong Electronics Fair 2019.

If it ends up in this price tag it could indeed be interesting. Too bad it has such a glossy touch display however, as mini-laptops are made to be used everywhere included outside and you won’t see anything on the screen.

When you look on eBay and Amazon most designs are 10″ plus. So are they serving a limited market.

I don’t understand the attraction.

Lots of tablets with similar specs have been available for significantly less money. If a real physical keyboard is essential, lots of Bluetooth models are available for cheap. For example:

Back in the day a lot of people got proper work done on tiny Psions and some of them preferred them over the more smartphone like palms so I think there is probably still a small niche for things like this. If the keyboard is usable for me this would be a lot better at doing the stuff I can just about do on my phone like sending emails. I could stash it behind the sofa or somewhere and grab it when I hear a notification for an important email. If I needed a bluetooth keyboard kicking around as well… Read more »

Just looking at the photo of the keyboard gives me “hours of typing unimpressive basic games into a zx spectrum” finger joint pains.

The keyboard on the Z88 was a lot better than the ZX Spectrum. If you want bad this is the first keyboard I worked/played on https://www.retrothing.com/2010/06/rebirth-of-the-first-sinclair-computer.html

After my programmable calculator, my first computer was a Canon-X07 back in ’83. I still remember many of the Z80 opcodes, real men don’t need assembler 😀

Opcodes are easy to remember when there’re just a few of them ; )

Kbd-wise, I’ve used all kinds of them over the course of the years, but I’ve come to the conclusion 10″ is the borderline for me at this age. Anything smaller, even if keys have adequate-ish surface area, is getting uncomfortable to type on, and thus unnecessarily distracting.

I think with these specs it’s more about the form-factor, really.
A 7″ is just enough for a jeans back pocket. No shovelphone in 7″ (yet), no tablet in 7″ (already).

Actually it can be used for some real work if you put lubuntu or so on it.
I still have an Asus EEE PC that I use every once in a while.

I’m reading this and responding from my EEE PC 🙂 (1025C to be precise). And it’s a really nice form factor, but too large to put in a pocket.

Started to sell in Japan for $185 as NANOTE.