Let’s say you’re running Raspbian on your Raspberry Pi 4 board, but would like to check out the latest Ubuntu 19.10 for the board. What would you normally have to do? 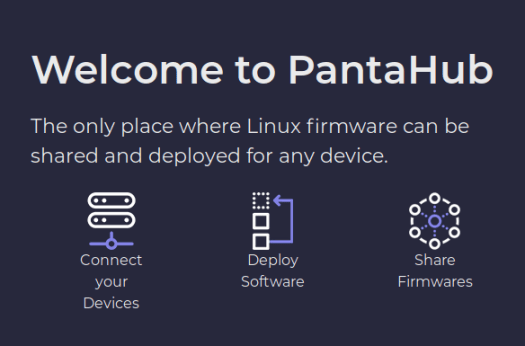 That’s fine for experimentation, but time-consuming if you had to do this for multiple boards that may be placed in various locations. That’s where Pantacor’s PantaHub, PantaVisor, and PVR utility come in.

Pantahub is a web dashboard used for registration, to monitor your devices, and documentation, Pantavisor is an Alpine Linux based  device init system that turns all the runtime into a set of container micro functions, while PVR is a command-line utility that let you interact with your Pantavisor-enabled device remotely through Pantahub to perform tasks like claiming your devices, or pushing a new firmware or app container.

Pantahub supports OpenWRT, Android, Yocto, Ubuntu and any proprietary Linux firmware, and the company currently provides Pantavisor images for Raspberry Pi 3 and QEMU. The video demo below, filmed by Charbax at the Embedded Linux Conference Europe 2019, shows a Raspberry Pi 3 running Debian being updated to Android without any physical access the board.

If you’d like to give it a try you can register on Pantahub.com where you’ll be given 2GB bandwidth, 2GB storage, and support for up to 25 devices for free.

After registration, you’ll be asked to install PVR on your Linux, Windows or Mac OS laptop/computer, flash PandaVisor to Raspberry Pi 3 (or use QEMU), and claim your device using PVR utility. You’ll find plenty of information on the documentation website, and the source code can be found on Gitlab.