The USB4 specification was officially released last September with the new standard promising speeds of up to 40 Gbps and up to 100 Watts power delivery over USB-C connectors.

MMCI is now offering a 2:1 USB4 switch, the first computer-controlled USB4 mux according to the company, that can control 1 or 2 products up to 20 Gbps. Model 3141 USB4 Switch is not designed for consumers, as there aren’t any USB4 devices around at this time, but for electronics designers, firmware and software developers to enable them to test & debug their USB4 implementations. 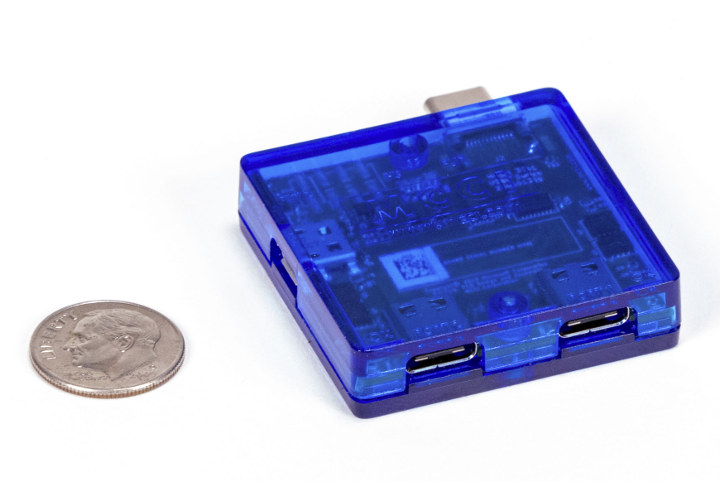 Beside not supporting 40 Gbps, the device has some other limitations such as VCONN powered devices drawing up to 0.5 A of power only, and lack of support for automatic Type-C cable flipping.

A photo of the board shows it’s copyrighted by Microsoft Corporation, so I guess Microsoft may have commissioned MCCI for the design, and the USB4 switch can be tested with Windows Hardware Lab Kit (HLK) to ensure compatibility with your Windows (10) devices. The Model 3141 USB Switch is also controlled over the micro-USB port by a test control computer running Windows and the Microsoft MUTT ConnEx-C software package.

The company explains that long-run randomized switching on a USB Type-C port helps to expose bugs in the hardware-firmware-software stack on both hosts and devices, and can easily reproduce connect/reconnect event with the control program without having to physically manipulate cables.

MCCI Model 3141 USB4 switch can be purchased for $795, and more information may be found on the product page.

That’s amazingly expensive per milligram of silicon considering that 100% of the job is done by the tiny PI3DBS16 PCIe MUX that sells for less than 1 EUR in 1000 qty: https://eu.mouser.com/ProductDetail/Diodes-Incorporated/PI3DBS16212ZBBEX

If that’s a prototype that can be understandable, otherwise they’re calling for some Chinese companies to counterfeit it I’m afraid!

i suggest most of the price tag comes from software part (and early r&d cost) ?

The members have a lot of money. So, why should you price it like this?

Devices like this are expensive for USB 2 and 3 too and there are no clones of those on taobao. The reason it’s expensive is because it’s low volume test equipment. The guys using this will be on hundreds of dollars a day so it’s not worth wasting their time building sometime like this from scratch.

That may be one of the reasons why too few vendors test their devices and that we sill find so many bogus implementations even of USB2 in 2019. Just like thermal designs in comsumer products started to improve when cheaper thermal cameras became available, we can expect that reliable USB products will be the norm when affordable testing equipment is available.

I was trying to work out why only cp2102 usb->serial would work on some USB host I was working with for months. It turned out to be an issue with the PHY calibration that I worked out by disassembling the firmware of another chip from the same company. TL;DR; if something that could capture and analyse USB (especially something that isn’t just a USB PHY spying on the bus at the data level) was less than $1K I could have saved a lot of time messing around and I maybe agree with you on the small scale/hobbyist stuff. But a… Read more »

I totally agree on your point and have always been following the same practice, even repurposing expensive hardware to suit my needs. E.g. I have no problem stealing the power supply from a $500 PC if it can save someone one day of thumbs twiddling, even if that signs the PC’s EOL. In the case above, I don’t see the added value. I mean, they’ve apparently done a pretty generic USB switch from pretty generic and dirt cheap hardware. They’d sell it $15 they’d sell it in hundreds of thousands of copies to many users, they’d make way more revenue… Read more »

>They’d sell it $15 they’d sell it in hundreds of thousands of copies to many users, I doubt it. These things are used for doing stuff like USB compliance testing.. there are not thousands of people out there doing that sort of work. >For me it’s like selling a USB-serial converter at $800 just because >obviously only expensive professionals use a serial port! Does that usb->serial converter have isolation on the USB side? isolation on the serial side? If it’s just a generic one well maybe they won’t pay $800 but they might pay $30 – $50 for an official… Read more »

I’d say we are ahead of usb4 being noticed on consumer market at least for 2 years. So it’s starting on computing devices for mass market prices and storage, gpu or server bandwidth requirements >= 2022?
(Reading at 1.1v serial output could do a voltage divider.)