But so far, apart from an AV1 demo on the RTD1311/RTD1319 development board (Pymparticle EVB?), and new about Technicolor Jade STB, I had not really seen AV1-capable TV boxes so far. SDMC DV8919 appears to be the first Amlogic S905X4 TV box on the market and one of the first running the recently released Android 10 on Android TV OS. 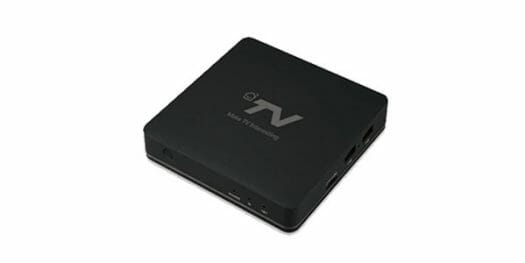 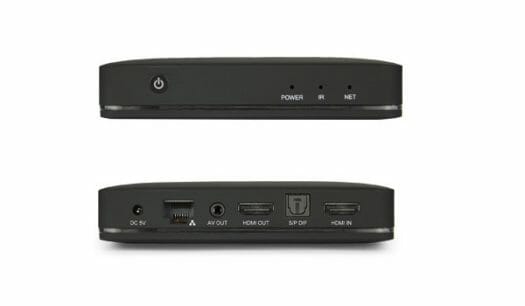 The HDMI input can be seen in the photo, but it is not listed in the specifications published by the company, so this would have to be confirmed.

DV8919 4K OTT TV Box runs on Android TV 10  OS (aka Android 10 on Android TV) and . It won’t be for end-users however as hinted by the DRM options in the specs, and instead, the TV box was designed for telecom, broadcasting and Pay TV operators.

This also means the UI does not have to use the stock launcher, and a so-called Android TV operator-tier launcher can be integrated into the firmware instead. The company also mentions their XMediaTV platform for customizations targetting operators.

Recommended accessories for DV8919 TV bo include a Bluetooth voice remote control, user manual, a power adapter,  and an HDMI cable. Visit the product page for further details, and/or to contact sales.

Just remembering the time when a good cpu was all we needed to play videos. Nowadays with every new codec one needs new hw…

You can Play/Decode Av1 videos with Dav1d 1080p(30fps-8bit) on most Hardware(arm64,x86). But we are looking here on a device that will use~10watt and will support 4K Decoding of a lot codecs in Hardware

I think @Diego was referring to decoding in hardware, but phrased it as requiring new hardware

I thought back to the time when cpus were fast enough to decode whatever current (at the time) codec like mpg2, divx etc. Nowadays if im having a tv box it does h264 next generation of silicone h265 third iteration now includes av1…

Of course you can do all in sw too, but at a certain premium.

It’s not exactly how it works. The reality is that the amount of generic CPU power needed to decode such high-end streams is huge and would require a big expensive CPU with a big cooling block like in any PC. Instead, most vendors focus on low-power generic CPUs to run average tasks and make them able to access such high-end streams via optional hardware accelerators. From a price and power consumption perspective, it’s really nice. From a device durability perspective it’s indeed a disaster. But let’s be honest, how often do these video standards change ? If they don’t change… Read more »