Sonoff-Tasmota is a popular open-source firmware designed to run on ESP8266 hardware for home automation projects. It was initially designed to run on devices from ITEAD Studio Sonoff family but now supports more products, boards, and modules from other brands such as Shelly, Wemos, Blitzwolf, and others. So the first news is that the project has recently been renamed from Sonoff-Tasmota to just Tasmota, and documentation has been moved from Github Wiki to Github.io.

A piece of more important news is that Tasmota now supports Zigbee. More specifically, the Z2T (Zigbee to Tasmota) concept allows you to make your own Zigbee to WiFi bridge by combining Z-Stack-firmware on CC2530 and Tasmota firmware on ESP8266 / ESP82xx hardware.

Basically all you need is ESP82xx hardware connected to a Texas Instruments C2530 based Zigbee device over a serial. Note that C2531 based device won’t work since they are connected over USB.

Normally, C2530 firmware is flashed through CC Debugger tool, but in this case, you don’t need to purchase extra hardware since Z-Stack firmware flashing can be performed through any ESP8266 board running CCLib instead. Once it’s done flash Zigbee2Tasmota Tasmota firmware to your ESP82xx board or device, and you need to configure the system for communication between the Zigbee module and ESP8266. This is all explained in detail in the documentation.

While looking into the subject I noticed ITEAD Studio had a Zigbee capable hardware: Sonoff Basic R3 Zigbee sold for around $8.5 on their website, or Banggood. 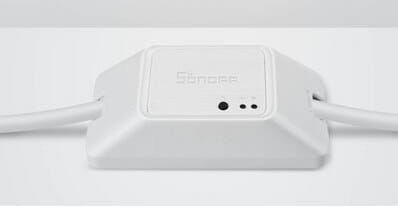 It could look like a potential candidate to act as a Tasmota WiFi <-> Zigbee bridge until we look at the specs:

There’s no WiFi at all, and it’s a Zigbee only switch. Not Enough TECH did a teardown and confirmed it’s based on C2530 chip. So maybe that explains why the documentation shows a gateway prototype (top photo) since there may not be off-the-shelf hardware that can be used for this purpose just yet.

Sent question to Sonoff via mail and got a reply from Jerry Shi that current (first) version of BASICZBR3 only support the ZHA standard and not ZLL or Zigbee 3.0 so is not compatible with hubs/bridges/gateways that do not support ZHA

hmm, IoT and Andreas. Are you the guy with the Swiss accent? ;p Keep up the good work!

Nope, I am Swedish and do not blog or do YouTube videos if that is what you are asking

For anyone wanting a cheap Zigbee gateway, I highly recommend the zigbee2mqtt open-source project (https://www.zigbee2mqtt.io/). It only requires a cheap CC2531 USB stick and eventually a flasher (or an Arduino).

I was hoping someone had found a way to use the radio on the 8266 and get it to TX/RX Zigbee.

same! I still do not understand why this is possible (but have just started researching it).

They both use 2.4ghz, so it seems like it would only take different firmware.

even if not, I dont understand how there’s not an esp8266/32 equivalent (that can be programmed in arduino, etc) yet…