We first covered MNT Reform in fall of 2017, when it was a prototype for a DIY and modular laptop powered by NXP i.MX 6QuadPlus processor, and with plans to eventually use i.MX 8 hexa-core processor.

Last year they designed several beta units of Reform to get feedback for a dozen users, and have now fully redesigned the laptop based on an NXP i.MX 8M system-on-module with the crowdfunding campaign expected to go live in February on Crowd Supply. 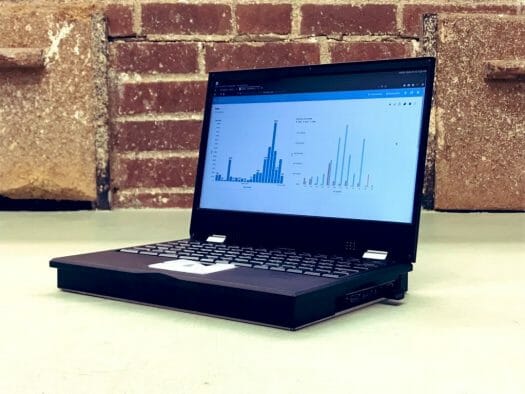 The goals of the project are to provide an open-source hardware laptop that avoids binary blobs as much as possible and is environmentally friendly. These goals guided many of the technical decisions.

For example, there are many NXP i.MX 8M SoM’s, but MNT selected Nitrogen8M as the schematics are available after registration on Boundary Devices website, and that means people wanting to create their own module compatible with Reform 2 could do so.

They also decided to use the MIPI DSI interface instead of HDMI for the internal display because HDCP requires a binary blob, and instead they went with a MIPI DSI to eDP controller that is supported in mainline Linux. The Vivante GPU will also rely on Etnaviv open-source graphics driver.

The laptop must also be user-serviceable with easy to source and replaceable battery, and MNT Reform 2 can now be fully assembled by the end-user in less than 30 minutes compared to nearly one day for the first prototype. The design only relies on standard M2 and M4 screws.

You’ll find the source code for the software and firmware, mechanical files, as well as KiCAD design files for all boards on the company’s git repository.

While the crowdfunding campaign has yet to start, and pricing is not determined, those are the options that one should expect (from lowest to highest price):

MNT Reform 2 is not the first DIY Arm Linux laptop as the Freescale i.MX 6 based Novena laptop was introduced in 2014, and the more affordable Allwinner A64 powered Olimex Teres-I in 2017. More recently, Pine64 launched Pinebook Pro Arm Linux laptop with an attractive price tag of $200 despite featuring a fairly powerful Rockchip RK3399 processor, but admittedly with less of a focus on getting everything open-source and modular.

Well, hello, 2001.
Haven’t seen laptops this thick for over 2 decades.

Hi Benjamin, Thanks for taking the time to provide your valuable feedback. Both the thickness of the device and the choice of processor are intentional trade-offs: – In a device that focuses on openness, we believe that it’s more important to have an extremely serviceable architecture, opposed to the trend of thinness at any cost. Also, Reform has a mechanical keyboard, which naturally requires more space. – While it’s not a performance beast, the i.MX8M is capable of running most productivity applications and browsers just fine, it has 6000 pages of detailed documentation, and all drivers for it are already… Read more »

There are not that many newer chips out there. Unfortunately. I guess that is the main issue why they picked an A53.

too bad they opted for a less common LiFePO4 chemistry. A regular li-ion cell, those you can find in pretty much any old laptop and most of the times, they are still usable, even if the whole pack is not.

Before manufacturers used battery managements, that would brick themselfs when cells died, you could replace the cells if you wanted to.

Thanks for commenting on this issue as well. I’m not sure if I’m understanding your point here, though. Would you prefer to use second-hand Li-Ion battery cells instead of LiFePO4 cells that are safer and have more charge cycles?

True, that’s a good point. I recycle batteries when I can. Have a bunch of them here. Most of them are regular Li-Ion. I still don’t understand why companies are not using replaceable batteries. As you can see, it is not that complicated. You could also do it in Akku packs. But I guess: Everything has to be flat. I typed on the newer Ultrabooks and on the new Apple Notebooks. Horrible. No feedback at all. I got my old X220 and I am really happy with this design. Hope to see more Notebooks in the future with this kind… Read more »

the easy reason is planned obsolescence and cost. It costs more to design a product with replaceable battery in mind.

I suspect they used LiFePO4 for improved safety or at least to reassure those afraid of classical Li-ion. But I agree that it’s bad, the energy density is much lower, they main benefit usually is to better stand deep discharges and to deliver higher peak power, two characteristics that a laptop doesn’t need.

association of brand name with fire events is an large disaster.
lifepo4 reduce the volumetric density to 3/4 and reuse old li-ion cell need to find same internal resistance and same capacity with is not “old cell” compatible
liion cycle only 500.
lipofe4 can cycle upto 2000.
a collect center with automatic sorting machine in each big city, can catch our old cells and return an old new pack