We previously wrote about XS LAB’s V-Raptor server equipped with SocioNext SC2A11 24-core Arm Cortex-A53 SoC, but the Korean company has been working on a different kind of project with V-Raptor Edge mini PC powered by Rockchip RK3399 processor and running Xubuntu 18.04 with an Arm EBBR-compliant UEFI bootloader.

The mini PC was designed to work as a thin client for Cloud PC VDI service from SK Broadband, but XS Lab appears open to expand its use to other applications depending on interest from distributors. 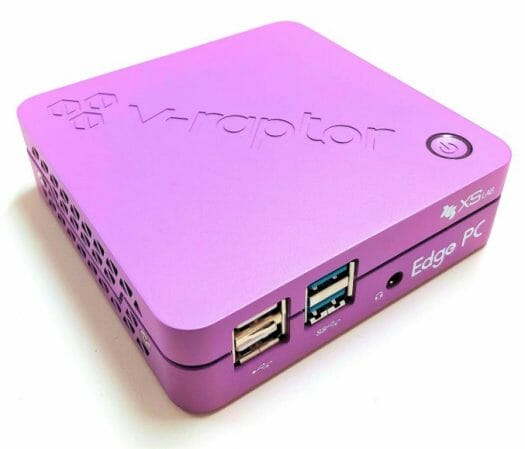 Some of the software features include a web-based remote console, system setting & remote configuration, OTA firmware update, VDI Client for Windows 10 via SK Broadband service. The company had a demo of the mini PC on YouTube but as people must have seen Windows 10, many got confused, even though that’s what thin clients are for, so the company decided to simply delete their YouTube account!

The company is now prepared online sales and work with distributors to start selling the mini PC for around $300 by the end of April.

$300 sounds a bit steep for this kind of device.

You get a Pinebook Pro for $200 and that is so much more.

But you dont get that Pink (Magenta) look…

Another example of a computer that is too small to place the I/O on the back so cables have to be routed around to the front. This one has the added advantage of making the buyer pay extra for this privilege.

At this price you’d rather get a real PC. It will be less trouble to upgrade or re-purpose, and more powerful.

Maybe the only avantage of ARM device is power consumption and no information about (off, idle, full load).
AMD 3200U can idle at 6.5w with external hmdi in use, laptop screen off, and finnaly so far away of the annemic RK3399 in term of compute capability.

That seems a large pink mark up for the product in the above article?

$300 for a rk3399? legal robbery? I’m really amazed how companies can put any price in their products without being punished by the masses at all.