There are many Android TV boxes on the market based on Rockchip RK3368 processor, while I’m not aware of any development board based on the latest Rockchip octa-core processor, and Linux support is basically inexistent. One device may fill both gaps: GeekBox. This TV box can run both Android and Ubuntu Linux, while it’s easily disassembled to access expansion headers. 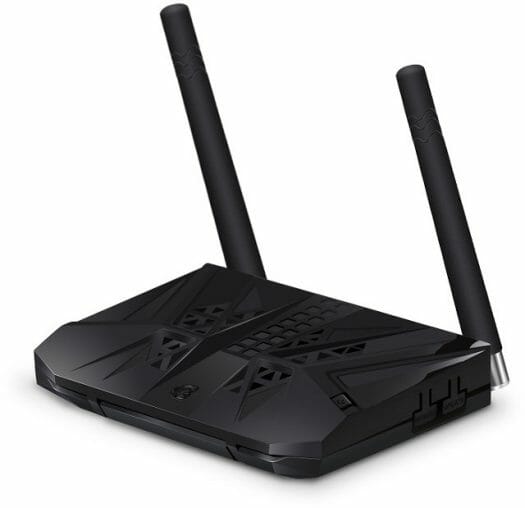 The hardware specifications are a little higher-end than most Rockchip RK3368 TV boxes we’ve seen so far: 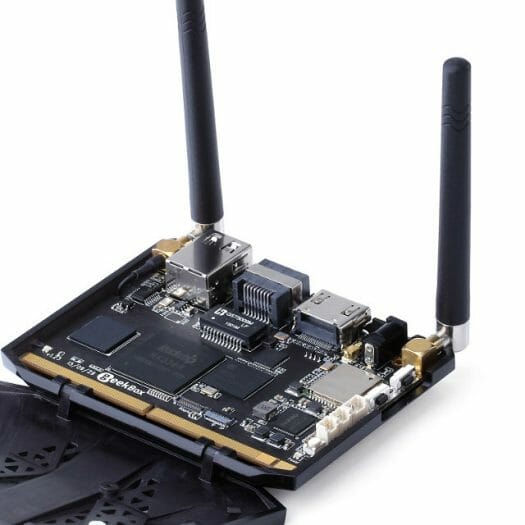 Once you open the case, you’ll find GeekBox is also a Rockchip RK3368 system-on-module (SoM) with a 314-pin MXM3 edge connector. The system will be pre-installed with Android & Ubuntu Dual boot firmware, and you’ll also be able to switch to Android–based Light Biz OS. The kit will including GeekBox SoM, the enclosure, an IR Remote control, an HDMI cable, two external antennas, a charging cable, an heatsink, a power adapter and a user’s manual.If you want to do some real work, you could also get Landigship baseboard (sold separately) to insert the Rockchip RK3368 module into the MXM3 socket and get some extra features and ports including:

The company can also provide various accessories such as a 7.9″ “retina” display,  a cooling fan, an RTC battery to connect directly to the SoM, high gain WiFi antennas (5dB), and so on.

A development platform without source code, documentation and community would rather be useless, so GeekBox.tv community has been launched for the board, where you can get support via the forums, and while firmware and source code are “comming soon”, you can already download the schematics (PDF) for GeekBox SoM and LandingShip carrier board.

GeekBox is available for pre-order for $109.99 on GeekBuying, with a $20 discount if you leave a comment on their promotion page. You also find accessories on such as the $29.90 Landingship baseboard, and others, and you could also get a complete kit for about $249. Shipping is planned for November 30.

@stefan
On the back of the board.. :p
Picture coming…

According to the landingship’s schematics above it’s a JMicron JM20329 USB2.0-to-SATA bridge. Don’t expect too much. They’re always slow and often lack features (SAT/UASP)

Nice but way too expensive. I’ve found a 2GB RK3368 powered TV box for $66 on Ali and I’m sure I can find the UART myself, solder a bit and voila 🙂

Is there any review about this, anywhere (I haven’t found any)?

It would be nice to know what features actually work under Ubuntu. Given the PowerVR GPU, I have a bad feeling about this (some crippled Ubuntu version with repos gone in a year and no way to upgrade it…etc)

Looks quite nice. Dare I say nicer than a 96board. No heatspreader, though? Wouldn’t 8 cores @1.2 GHz need one not to throttle?

@blu
It sells for an heatsink. As usual, they just don’t show it on the pictures…

@sola
GeekBox is very new, and will only ship by the end of the month.
GeekBuying told me they plan to send a review unit my way.

At this price, once would expect at least a single USB 3.0 port

I’d like to pipe in here– geek box is a quantum leap in quality above anything else done in the 3368 realm, and it’s also made with hackability in mind. There are *big* plans for that humble “landing board.” Expect much, much more from this series of “as open as rockchip will allow this week” devices…. 🙂

@blu
The board designer, who goes by Gouwa, is himself a designer, not only an electronics engineer, hence the unique touch on… just about everything. The difference between this and that $66 dollar 3368 mentioned is that he personally seeks out the best individual components for each device he’s involved in. I’ve uploaded some photos of “his take on a 3188 tv stick” vs “average 3188 TV stick” to give you an idea.

Improves everything he puts his mind to, this man does…..

@Jacob
Thanks for the tip. I’ve been looking for an 8-core A53 2GB SBC (since same-count A57 don’t come cheap at all), and GeekBox looks like what I need, more so than LeMaker’s HiKey.

@Jacob Gadikian
This is nice but still double the price is a lot and the RK3368 is a pretty weak SOC. Yes it’s 8 cores but they’re A53 and at 1.2 GHz so not that much …
Still it’s good that such a product exists, choice is always good. I hope kernel source will of course be available too.

So it might not be the best value there is when it comes to RK3368 TV box, but as a development platform it looks quite versatile, at least on paper.

is it have mipi-dsi pins? ı want to use my old phone lcds on it.

@hex
You can check the unboxing post for high res pictures: http://www.cnx-software.com/2015/12/19/geekbox-tv-box-unboxing-and-development-kit-assembly-guide/

GeekBox don’t have the connector, but Landingship baseboard does have a MIPI connector for external display. In the schematics they call it LCM-MIPI.

There is a linux sdk including the toolchain for the geekbox?

Lacks in documentation. I got a review unit for my website and it appears they sent me a slightly defective one. Android is unusable and Linux is unstable.

Anyway, I’m used to Arduino type GPIO, where you just program the thing from the IDE and can’t find any documentation on this particular board (with the landingship) on how to use the GPIOs. Never did GPIO directly from withing linux. I’m comfortable with Linux btw, it’s my main OS for 3 years.

Do you have any info on the usage of the GPIOs pins on the landingship?

GeekBox gets a camera, and it’s now running Android 6.0 too… -> http://promotion.geekbuying.com/promotion/geekbox_new_release

The are still doing it for £80

Not sure if real bargain but a email tells me that the Geekbox and landingship is just under £ 75.00 on promo, 24hrs left