Rikomagic announced their MK902II mini PC based on Rockchip RK3288 in May, and which has started shipping recently for about $130. The company have now announced MK902II LE (Linux Edition) based on the same hardware, but instead of running Android 4.4, it’s running Xubuntu 14.04 with some virtualization technique that allows it to run x86 Linux programs such as Skype, and it can even support Wine to run Windows programs. 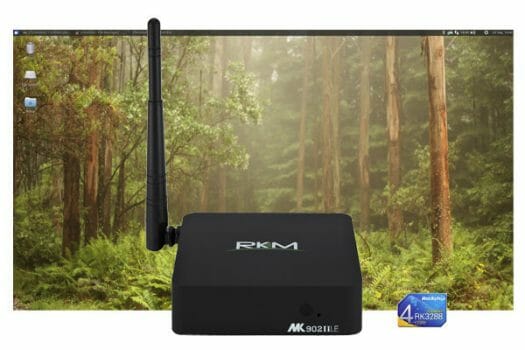 The device comes with an IR remote control, a USB cable for firmware updates, an HDMI cable, and a power adapter. The system is also said to boot to Xubuntu within 6 seconds. A native Linux kernel compilation takes about 10 minutes on this machine.

A video has been uploaded with the system, mostly showing web browsing experience, including playing a video from BBC iPlayer which is OK in embedded mode, but does not look so good in full screen (tearing) because there’s no video hardware acceleration in Linux, and everything is handled by software.

There are also two other videos showing a one way video call with Skype (no camera connected to MK902II LE), and Microsoft Office Word Viewer running in the device via Wine. Performance is not that great but it works.

You can access these other videos, and purchase MK902II LE on Cloudsto for 114.99 GBP including shipping. That’s about $190, or $60 more than the Android version however, . You may also want to follow MK902II LE discussion on Rikomagic forums.

FYI, In the end of the page OUR PRICE INCLUDES WORLDWIDE SHIPPING BY DHL. ALL ORDERS ARE SHIPPED DIRECTLY FROM THE FACTORY IN CHINA and typically arrive within 5 working days, this is a trackable service and tracking numbers will be provided upon request. Please note these products do not include VAT, and are sold as Tax Free Purchases. Please note that with these items Tax, Import Duty and any shipping Administration Fees may be due payable by you upon entering your country. Any costs levied by your customs are due payable by you. Any additional administration costs levied by… Read more »

@P3dr
so we can expect at least GPU drivers openGL and OpenCL ?

If you can deliver that, you’re faster no. 1 seller then you think!

Ikem :
@P3dr
Desktop Linux with hardware accelerated video is THE selling point!
If you can deliver that, you’re faster no. 1 seller then you think!

openmax over libhybris + gstreamer is possible.
at least yolla and ubuntu phone use this way on quallcomm
I saw some activity on gstreamer openmax plugin in bugzila

Linux without hardware acceleration support? Then it’s no faster than a rk3188 or AMlogic SoCs… GPU / HW support is a must / necessary.

The x86 virtualization solution might be exagear which is claimed to be 4 times faster than qemu
http://eltechs.com/product/exagear-desktop/

A video has been uploaded with the system, mostly showing web browsing experience, including playing a video from BBC iPlayer which is OK in embedded mode, but does not look so good in full screen (tearing) because there’s no video hardware acceleration in Linux, and everything is handled by software. Tearing is more a problem of vertical blank sync, XFCE4 that uses update of futur versions of XFCE in ubuntu 14.04, showed that sync to vertical blank of the windowing system stop any tearing effect, and as a border effect, make everything faster. As there is no redraw until next… Read more »

Toto : Tearing is more a problem of vertical blank sync, XFCE4 that uses update of futur versions of XFCE in ubuntu 14.04, showed that sync to vertical blank of the windowing system stop any tearing effect, and as a border effect, make everything faster. As there is no redraw until next VBS, no useless drawing function call are made and cpu/gpu/anything that can draw can concentrate on what need to be really updated. They use XFCE4 on the video, and didn’t activated vsync draw, I added a comment on the video in the hope they activate it and remake… Read more »

Really makes little sense to me, CnX could you consider doing some research about who we’d need to contact at Rockchip or even a manufacturer to get HW acceleration on this device? Maybe a seperate blog post on your blog with petition style template and email? please.

@Harley
I don’t seem to remember reading this anywhere?

@jacbobs
Rockchip is working with Google Chromium OS team, as can be seen with various patchsets in the ARM Linux Kernel mailing list, so we’ll have to see what comes out of this.

Now, somebody reported the Firefly guys said there was no SDK in Linux for VPU support from Rockchip. But I can only assume something will come out of the Google/Rockchip partnership. Otherwise, as noted by @m][sko , libhybris can be a workaround making Android libraries usable in standard Linux distributions.

cnxsoft : The x86 virtualization solution might be exagear which is claimed to be 4 times faster than qemu http://eltechs.com/product/exagear-desktop/ Third generation Cortex-A (A7/15/A12) has hardware virtualization capabilities. It doesn’t mean it uses x86 emulation here for the whole desktop but could mean ARM virtualization (for the destkop) ubuntu 14.04 works well on ARM, or only hw emulation/virtualization for x86 applications ??? After looking at their forum they don’t speak about amulated Ubuntu and they speak about hardware acceleration. The tearing (in windows move and video view) is not due to no hw acceleration (else the video should be far… Read more »

Most of design houses does not have intresting in Linux.

Confirmed by most of them.

Anybody have access to MK902II ubuntu firmware?
Can you put it somewhere public?