It’s time to prepare! No, not for that COVID-19 thingie, it’s too late, but since 2020 has not started the best way we should prepare for all eventualities. It all started badly as I fell off my bicycle on New Year’s eve, and it went south from there, from talks of world war three in January, to the thread of a virus pandemic that could kill millions worldwide, to the start of the first global great depression.

2020 will be the “year of doom“, and we should expect massive earthquakes,  once in a hundred-year megatsunami what will wipe entire cities, gigantic locust swarms in southern Europe, climate change induces, and leading famine, a couple of large asteroids hitting the hearth, and so on. But we should not forget the nuclear threat either via nuclear war or damaged nuclear reactors following natural disasters or terrorist attacks. 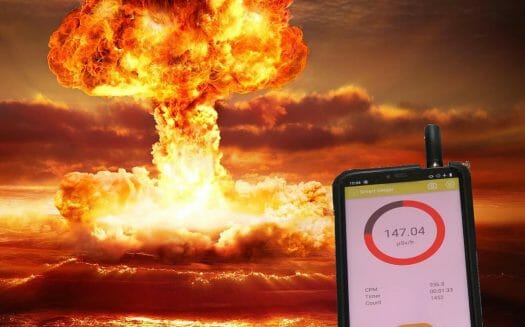 One way to protect yourself and your family is to check the level of variation in your area, and we wrote about FTLAB FSG-001 Geiger counter/radiation detector for Android & iOS smartphones several years ago to do just that, but there are now more options, and Weaponsandstuff93 checked out several cheap counters ($20 to $30) and Android apps in the video below.

He tested the Geiger counters with various (slightly) radioactive materials, and they all work pretty well. He also noted that despite being advertised as gamma only, beta radiation can enter through these at the top of the jack.

For those of you who bought a phone without an audio jack, sadly you’ll likely die of radiation poisoning as pointed out by a random YouTube commenter who clearly knows what he is talking about. As the owner of a Xiaomi Mi A2 smartphone, I share your pain.

The FTLAB “Geiger Smart Lab” counter can easily be found on eBay, but I was unable to find the smaller model tested in the video. The two apps used during the review were Smart Geiger and Radmeter working with either counter. Reviews of those apps are rather mixed, but it appears there may have been another type of pandemic ravaging humanity, as most people complaining did not plug a Geiger counter into their phone.

If you worry about COVID-19 pandemic or a nuclear explosion, worry no more, as there’s a long list of all the potential disasters that may end life on earth as we know it, and the US government has plans for everything.

Finally, someone is being proactive instead of reactive. This is essential for detecting the inevitable Nuclear Sharknados that will plague Summer 2020.