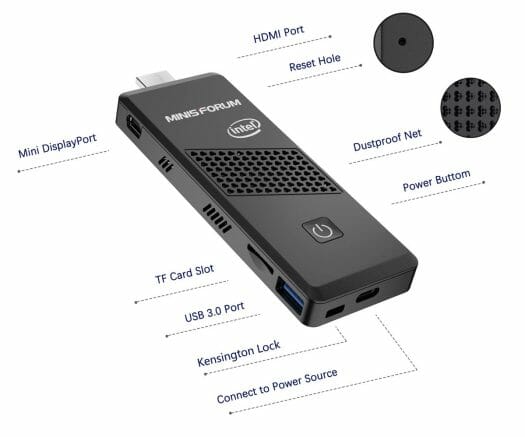 MINISFORUM S40 is yet another Gemini Lake mini PC, but it comes in a super-compact PC Stick form factor and combines an Intel Celeron N4000 dual-core processor with 4GB DDR4 RAM and 64G eMMC flash storage. All that for just $189.99 on Banggood.

The PC stick is supposed to ship with Windows 10 Pro, but at this price, it might just be a trial version… 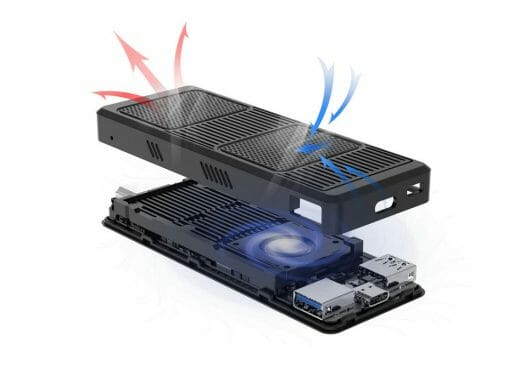 It’s also challenging to pack a 6W processor into a really small form factor, and they had to use a fan to keep things cool. We’ve previously seen another ultra-compact Gemini Lake mini PC, about as thin but larger, with  SSD-sized ZOTAC PI225-GK equipped with the same Celeron N4000 processor but fanless.

We did not test that specific model, but earlier Linuxium reviewed Zotac ZBOX PI225 with the 6W Celeron N3350 Apollo Lake processor and found it did the job but with lower performance as they had to disable turbo boost frequency in the BIOS to keep the CPU temperature in check. Again that was a fanless PC stick, and MINISFORUM S40 is actively-cooled, but it’s not impossible they had to lower the TDP, or performance may suffer under load. 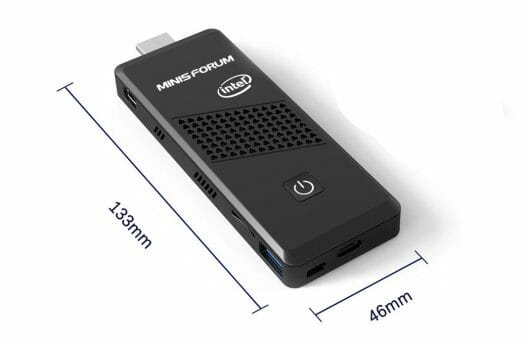 Thanks to Whiterat for the tip

I had the same question in my head but the Laptop in my mind was the CHUWI HeroBook Pro. I did buy it a couple of weeks ago for below 190 Euro.
I mean, okey, a Laptop is bigger than this Stick-PC but you always need at least a keyboard and mouse anyway.
Maybe I am not creative enough to see the real use for this…

My point was that I just took the cheapest locally available thing, on purpose nothing directly imported. So the price definitely is not something competitive in my opinion.

P.S. of course we all lack some creativity towards those things we don’t know 😉

If you need to drive two large 4K displays, for example digital signage, this would be better and cheaper than a laptop.

Sure but would you do digital signage with such a thing? So far those I have seen from close up seemed slightly more rugged than this.

Some friends of mine have been building network monitoring systems using comparable small devices connected to large TV screens. There’s a compromise to find between the device’s capabilities to run a browser and some local software to collect performance information, and the device’s size and consumption. This one misses network connectivity to qualify but there certainly are other use cases which are perfectly suited.

It’s a pity no Ryzen computer sticks are in the way. Not even android tv sizes 🙁

Especially if it can be repurposed 😉

Unlikely to have Ryzen Android TV boxes, but Beelink is working on an AMD Ryzen mini PC with R5 3600 and R7 3700 CPU. It will be much more than $200 though, and likely not fanless either since those are 65W processors.

Sounds really interesting. 200 Bucks just for the Barebone alone? Just headless with 3600/3700 or for the APUs too?

I have no other info for now… But your price is way too low. The Ryzen 3600 processor itself is sold for $199 MSRP, a bit lower with discounts. A barebone system would likely be around $350-400.

I was thinking Barebone as without CPU/RAM, like a even smaller, non-apu-compatible DeskMini A300, so just an AM4 socket to put in the CPU in you want. Otherwise with only 3600/3700 it wouldn’t be that appealing to anyone wanting to use a APU nor using something like a 1600 AF, 1200 AF or 3100.