The good news is the laptop is now almost ready for prime-time and has been launched on Crowd Supply with price starting at $999 in DIY kit form without storage, and $1,300 for a complete, assembled system with 256GB NVMe storage. If you don’t have that amount of money to spend, but would like to support the project, a $40 MNT Reform T-shirt is also offered. Alternatively, the motherboard only goes for $550. 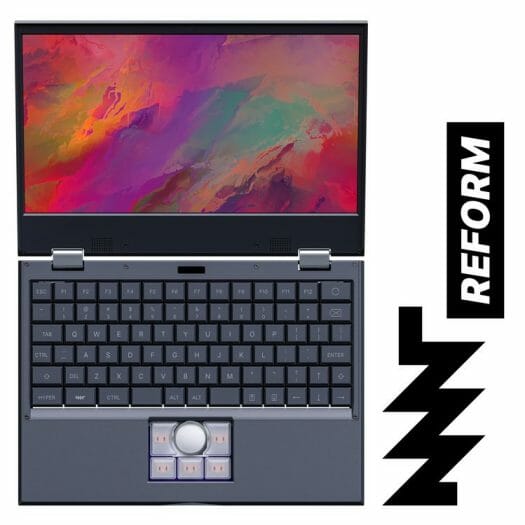 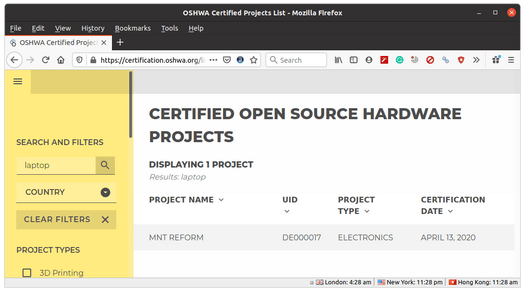 MNT Reform is the one and only OSHWA certified laptop that I could find (on May 9, 2020), but not the first “open source hardware” laptop running Linux, with for example PineBook Pro which is virtually unbeatable in terms of price ($200) and performance (Rockchip RK3399). However, MNT Reform has a fairly different design philosophy as openness, user serviceability, and modularity were the main goals, even guiding some hardware design decisions that increased the price of the device. 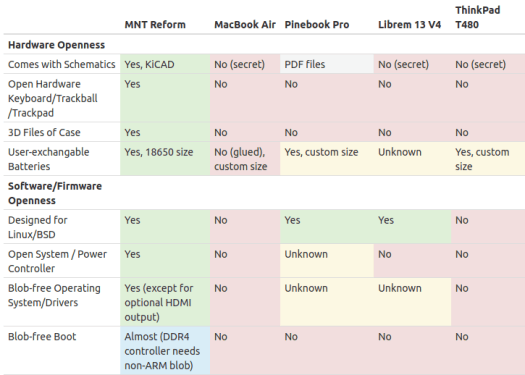 All hardware design files have been released, and the software (Debian 11 installer with Linux 5.x mainline preloaded on MicroSD card) can operate with open-source only components, except for the RAM. Some specific features that you may optionally opt to use do require closed-source binary blobs including HDMI output (HDCP blob). You’ll find hardware (KiCad), 3D design, and software on the MNT Reform website.

The crowdfunding campaign launched less than 24 hours ago, and it’s not going too bad with $60,000 raised out of $115,000 funding target. The prices listed in the introduction include free worldwide shipping, and backers should expect their rewards to ship in December 2020.

Honestly, I doubt many people are willing to pay $1000 to get the performance of an old RaspberryPi 3B in an everyday laptop. This is the problem with hardware designed by enthousiasts like this, decent hardware costs so much and it takes so much time to design that by the time it’s ready to ship, the software that was able to decently run on it is long gone 🙁 I think that now only the phone/tablet makers are able to respond instantly with a new product when a new chip is released… except that until SoC vendors will decide to… Read more »

> get the performance of an old RaspberryPi 3B

I know what you mean but IMO it would be better to put the performance into perspective with a similar device: Pinebook Pro. We all know that the relevant CPU performance metric on a laptop is single-threaded and that almost everything that defines performant behavior happens on 1 or maybe 2 CPU cores. Here the Pinebook Pro has a 150% advantage (A72 at 2GHz vs. A53 at 1.5GHz). The Reform is at 2/3 the performance of RK3399/OP1 Chromebooks from years ago 🙁

Sure but my point is that few people have an idea what to expect in terms of perf from a Pinebook Pro while many know how slow an RPi3 is. And the reality is that this one will not perform any faster due to using the same CPU cores at the same frequency. And yes I agree that an RK3399 is much more suited to a laptop, even though still not spectacular by any modern standards.

Anyway, comparing with an RPi 3B would also mean comparing somewhat decent storage performance with plain crap (all Raspberries prior to the 4 have very little here (AKA USB2) while both i.MX8 and RK3399 provide at least ok-ish NVMe/SATA capabilities).

And we all (should) know how important fast random IO performance is on the system drive of a desktop or mobile computer.

Only taking in account the CPU is unrepresentative of the performance of the system. Raspberry Pi and many other SBC were designed for use with cheap eMMC or SD storage, whereas Reform offers M.2 slots for fast NVMe SSDs. Also the GPU is different (I can’t tell if it’s better or not, but you should also take that into account).

It’s not taking this one only. The performance of a system is the inverse of its latency, which is the sum of the latencies. I.e. perf=1/sum(i=1..N 1/perf_i). As such as soon as you have one slow component, it caps your performance. For sure on the RPi3 it’s not obvious since everything is slow. But an A53 at 1.5 GHz is a damn slow CPU, it’s the Odroid-C2 from 5 years ago or so. You can put whatever DDR4 and NVME you want, as soon as the CPU is needed you’ll have to wait for it. What’s sad is that i… Read more »

Altough I basicaly agree, storage speed and memory should make this thing run loops around a raspberry pi 3B in desktop usage.

There is the DIY aspect, the ARM aspect, the fully open hardware and the what you will do with it. With such a price I believe they will be researchers or industrials who would want such laptop as base where can they include their own electronics, sensors, interfaces. However for projects with a big budget, I’m guessing they can also design the whole thing if they need a lot of CPU and GPU power or have a custom board and package developed for them. I hope they know which market they are targeting. I may miss a few points? Out… Read more »

>There is the DIY aspect, the ARM aspect, the fully open hardware and the what you will do with it.
>With such a price I believe they will be researchers or industrials

The two people in the world that want that could buy the SoM themselves and design a board for it.
My guess is they would probably want something ZynqMP based instead if they were going that far though.

>Disclosure: posted from an iPad Pro with an A12X ?

Hardcore doood. Does your dad work for Nintendo?

Sadly Olimex Teres I is missing from the comparison matrix

Overprized, there would be better projects in my opinion.
Make a decent 9-13 inch tablet, with some good ois&eis camera, with actual android/arch/debian support and good audio.
Something like Samsung DEX functions on it and get rich.
A53 cores, really for what? Low power!

If the SoM isn’t open source hardware I’m not sure how this can claim to be “open” really.
OSHW is a bit of a sad joke when the PCB is really just a breakout for some highly integrated chip but it’s even more of a joke when it’s a breakout of a breakout..

MNT Reform laptop is now fully funded, so it will go ahead.

Great! At least it may encourage others to try their luck with modern CPUs.

Hi! Is it possible to replace the 4GB LPDDR4 with a 8GB LPDDR4 unit? Any limitations with RAM?

The Nitrogen8M SoM is only available with up to 4GB RAM, and I believe this is also a limit of the i.MX 8M processor, so 8GB is not an option.