We first wrote about Panfrost open-source Arm Mali GPU driver getting initial support for Mali-G31 Bifrost GPU in late April, when engineers at Collabora managed to run some basic demos.

Progress has been fast-paced as the company has now implemented support for all major features of OpenGL ES 2.0 and some features of OpenGL 2.1. That means hardware-based on Arm Mali-G31 GPU such as ODROID Go Advance (used for testing) can run Wayland compositors with zero-copy graphics, including GNOME 3, every scene in glmark2-es2 benchmarks, and some 3D games such as Neverball. All without any binary blobs. 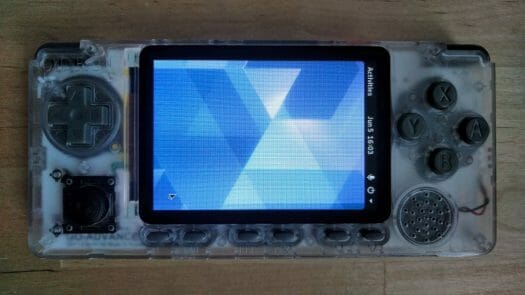 All changes are already included in upstream Mesa with no out-of-tree patches required, and Bifrost support can be enabled using PAN_MESA_DEBUG=bifrost environmental variable.

There are many other hardware platforms with SoCs based on Mali-G31 GPU besides Rockchip RK3326 powered ODROID GO Advance game console, including Amlogic S905X3/S905D3 SBCs such as ODROID-C4 or Khadas VIM3L, some Allwinner H313/H616 powered TV boxes, and plenty of recent Amlogic based TV boxes including SDMC DV8919 hybrid TV box or Google ADT-3 developer kit.

Mali-G31 GPU is not the only Bifrost GPU integrated into Arm SoCs, and processors with Mali-G3x, Mali-G5x, or  Mali-G7x GPUs will eventually be supported. Panfrost driver has also been compatible with Midgard GPUs such as the Arm Mali-T860MP4 GPU found in Rockchip RK3399 processor for a while.

This reminded me that I intended to order some of the odroid thingies. So I go to the site and they are sold out. :'(

The ordering window for the GoA was very narrow. They ran out quickly. There is a new revision out (extra shoulder buttons, etc.) but I think it sold out as well. I’ll let you know the next time I see them in stock. (nope, I was wrong. Out of stick, too).

Looking at the web page. Looks like you’re looking at the original GoA page which is discontinued. The new versions are shipping (slowly):
https://www.hardkernel.com/product-category/odroid-board/rockchip/

There are also some PX30 SBCs in development from SECO and others.

Rockchip RK3308 is a stripped-down version of RK3326/PX30, and Rock Pi S SBC should be available by now

Mali Bitfrost GPU (gen1/2) are Mali-Gxx not G3x. First announced model was Mali-G71 in may 2016, if I am not wrong. G31 was used, probably because it was available on one or few, well OpenSource/mainline Linux supported SoC, so a good base to progress quickly on driver.