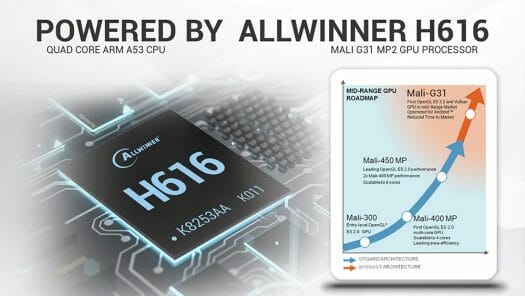 Allwinner H6 quad-core Cortex-A53 processor with Arm Mali-T720 GPU was launched in 2017 and made its way into various TV boxes and SBC’s. But last year, we got some news of lower-cost versions of the processor with Allwinner H603 and H6 VC200-OS SoC’s.

So the first time, I read about Allwinner H616, I thought it was yet another variant of little interest. But it turns out H616 is the first processor from the company with a Bitfrost GPU, namely Mali G31MP2, meaning it supports Vulkan, and down the line, it could potentially be supported by Panfrost open-source graphics driver. Another positive for the processor is support for Android 10, while AFAIK other H6 processors are stuck to Android 9.0. 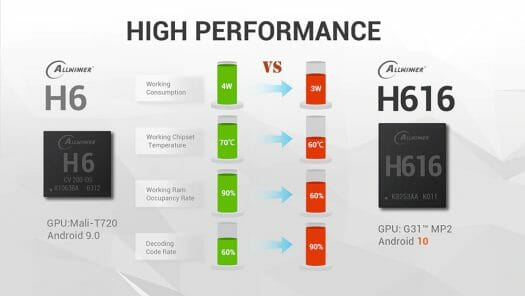 Another advantage is low power consumption leading to lower CPU temperature. It might be a process change or some other optimizations in the silicon, we just don’t know at this stage. The illustration also claims a lower “working RAM occupancy rate”, which probably means they optimized Android 10 for a lower footprint leaving for memory for apps. I’m not smart enough to understand the meaning of “decoding code rate”, unless maybe it refers to faster Java bytecode handling. 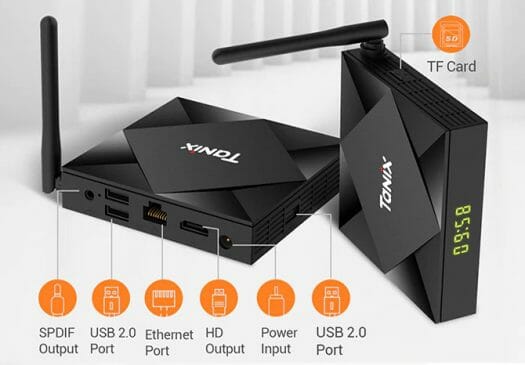 We don’t have the full details about Allwinner H616, but there are already some TV boxes based on the processor such as Tanix TX6S and T95 selling for around $22 and up, and we may learn a little more.

The box runs Android 10.0 with ALICE UX, and Kodi 18 pre-installed. It ships with an IR remote control, a power supply, HDMI cable, and user manual. An optional keyboard or air mouse is also offered. 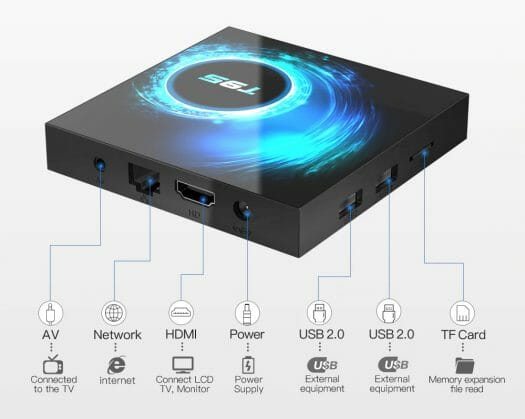 T95 has similar specifications including 10/100M Ethernet (no Gigabit) but adds an AV port.  At first, I thought the processor may not come with GMAC, but the processor was just discussed on linux-sunxi IRC, and the device tree file from the SDK (not public yet AFAIK) indicates a GMAC is present. Allwinner H616 code name is sun50iw9p1 in the source code.

One person has such as box, and the output resolution is stuck to 720p50 in Kodi 18.5. The problem is “The firmware on your device does not implement the modesetting API, therefore you cannot switch modes” according to fritsch, a Kodi developer. So be aware that since Allwinner H616 + Android 10 is still a relatively new platform, there may be a few bugs or missing features.

Thanks to xnc-hardware for the tip

“In short, the TANIX TX6S is undoubtedly one of the worst TV-Box we have reviewed in a long time, the Tanix brand has done a terrible job with the firmware and does not show any interest in the product. “

Didnt the rockchip SoC used on the Odroid Go Advance also has a Mali-G31 GPU?

Yes, and some Amlogic processors have it too. But it’s the first Allwinner processor that does.

Not a defense of Allwinner, but show me a BSP that’s not trash.

Does this mean new T5 and A100 SoCs are to be announced soon ? Do you have more information on this 🙂 ?

Just to make sure is it the UI resolution (which you’d see in tool like CPU-Z), or the output resolution that you can check with your TV?

Some low-end TV boxes may still be using a 720p user interface, but when playing video they switch to 1080p or 4K resolutions. That’s normal behavior.

My T95 android tv box wifi is not coming up