After Greg K-H handling Linux 4.19 release, Linus Torvalds is back at the helm, and released Linux 4.20 just before Christmas:

Let’s face it, last week wasn’t quite as quiet as I would have hoped for, but there really doesn’t seem to be any point to delay 4.20 because everybody is already taking a break.

And it’s not like there are any known issues, it’s just that the shortlog below is a bit longer than I would have wished for. Nothing screams “oh, that’s scary”, though.

And as part of the “everybody is already taking a break”, I can happily report that I already have quite a few early pull requests in my inbox. I encouraged people to get it over and done with, so that people can just relax over the year-end holidays. In fact, I probably won’t start pulling for a couple of days, but otherwise let’s just try to keep to the normal merge window schedule, even if most people hopefully won’t even be back until over the merge window is over.

As to the details of this last week of 4.20 – most of it is networking (drivers, core networking fixes, bpf). There’s a few other non-network driver updates too, and a revert series of some of the x86 inline asm changes that were obviated by upcoming compiler support.

Have a Merry Christmas or other holiday of your choice. 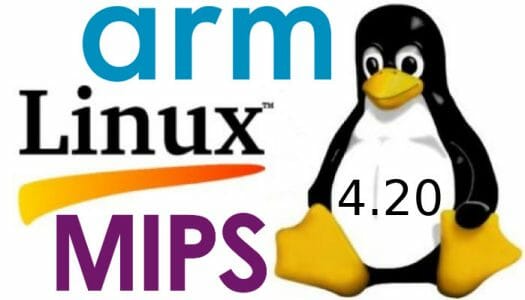 Some interesting changes in Linux 4.20 include:

Summary of MIPS updates for Linux 4.20:

You can read a more complete Linux 4.20 changelog (here)with comments only generated with git log v4.19..v4.20 --statcommand, and you’ll also find summary of changes on KernelNewbies.

It seems with 4.20 the Banana Pi M2 Ultra is finally usable*. The R40 GMAC and SATA interfaces are working.

I’ve built and tested 4.20 on my BPi M2U, and I can finally say it is no longer a paperweight! It just goes to show that 2 years after release, a SinoVoIP board is as useful as a Rock64 on release day. Banana Pi are still offering Android 6 and Linux images based on 3.10…

4.20 is just awesome on the H3… First time that is working as a multimedia thing with all OS SW 🙂

So it’s finally as usable as RPi has been for years?

Poor Jerry and his continuous struggle to boost RPi sales… Allwinner H3 ‘as a multimedia thing’ worked from the beginning — though partially with proprietary and closed source stuff (Android libs provided by the SoC manufacturer). The above comment was about multimedia with all OS SW, something the RPi will never see (OS means open source, a concept RPi fanboys might not be familiar with). It’s about open source software and not proprietary closed source crap as it’s the case on those Raspberries. All the multimedia/video/camera stuff runs on the closed source RTOS called ThreadX and to be able to… Read more »

I just was going to write what so big change happened to H3 cause I ‘ve seen only the line with H3 – SID in changes. Until I didn’t see the first line 🙂 Unfortunately all my Orange PI boxes have some issues with HDMI and I’m using them for non-multimedia purposes (which they serve perfectly with Armbian server) .

Jean-Luc, in last sentence you need to “s/4.19 changelog/4.20 changelog”, you took too much of the previous announce 😉