But there’s an upgraded model coming soon with ODROID-H2+ getting a slightly faster Intel Celeron J4115 processor, 2.5 GbE networking, a couple of extra I/O on the header for USB 2.0 and HDMI CEC, and a change to the 12V SATA power circuit to improve the suspend-resume power control sequence of 3.5″ HDDs. 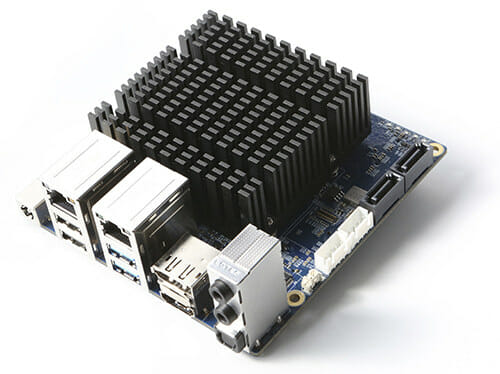 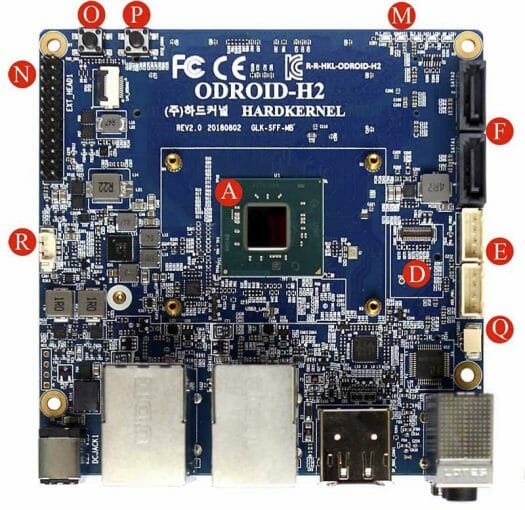 The board remains fully compatible with the original ODROID-H2 single board computer, and you can install Windows 10, Ubuntu 20.04, and other Linux operating systems on the board. Note, however, that you’ll need to either compile the Ethernet driver or install it as a DKMS package if you plan on using Linux. No extra drivers are needed for Windows 10. You’ll need an add-on board to use HDMI CEC.

The new board is really great for people wanting 2.5 GbE without breaking the bank, as ODROID-H2+ is up for pre-order for $119 on Hardkernel, and you can also find it on Ameridroid for $128.95 after applying coupon CNXSFWSUPPORTER6. Note you’ll also need to purchase a power adapter, one or two DDR4 SODIMM modules, as well as storage to make a complete system. Delivery is expected to start at the end of the month.

Sounds like RPi4B is pushing the limits and the competition seriously needs to fight back. Does this really have two display outputs? The power supply voltage seems a bit problematic compared to venerable 5V USB chargers.

Apparently those don’t work for the RPI either considering all the issues they seem to have from people using the *wrong* chargers.

I bet you have a 19v laptop power brick laying around there.

Oh, it takes up to 20V! That’s better than the inputs of the C4 and N2 which only go up to 17V. Being able to reuse all of these 19V laptop bricks is wonderful. Thanks, HK!

Well, Rpi 4 just sold 640K units in march 2020 only. You can’t really compete against that. Just proves, price and community(support) matters the most. Power Supply Voltage has been fixed on latest Rpi 4 8Gb model. Yes, It does have 2 display outputs. This Odroid-H2 has been on my list for months because it’s an impressive SBC. Unfortunately, it’s hard to justify $350(SBC board, case, AC adapter, BT module, wifi module, LED power button, plus taxes and shipping from hardkernel or ameridroid). I live in Canada and import duties are expensive($100), this does not include ram($64 for dual channel… Read more »

Yes, unlike the Rpi4, this really has two working display outputs. They’re even normal sized so you won’t need an adapter. The power input is vastly more flexable than the very limited input abilities of the Rpi4.

The H2+ is what you get when you actually have hardware engineers.

After the RP4 came out with 8GB, I finally surrendered and got one. My main display is 4k at 42″ or the equivalent of 4 ‘normal’ ones and the RP4 can’t handle that, neither for HD media (not talking 4k) nor even Google Maps in Chromium, which is supposed to be accelerated.   My Jetson Nano, which I got last year for the same price, handles that display very competently and with an A2 speed µSD and swapping turned on 4GB of RAM, worked well enough for desktop work, even if I’d prefer more RAM. Actually I guess I’d really… Read more »

Thomas, thank you for your opinion on the real-world performance of the RP4, Jetson Nano, and J5005. Currently I am using an old desktop with a fourth generation Intel Core i3. On both X11 and Wayland, Chromium is struggling to give me smooth panning of a map with Google Maps on a the native resolution on a 4K monitor. With Firefox it’s even worse. I would like to replace the i3 with an SBC to gain quietness and to save electrical energy.   Could you elaborate what you mean by “no contest” please? Is Google Maps performing better or worse… Read more »

Google Maps on the RP4 is next to unusable, it will start to overheat on loading the initial map and changing angles or zooming results in something like 1 frame per minute. Even the mightiest of all Raspberries IMHO is a pure 2D device and can’t hold a candle to the Jetson in terms of graphics power.   On the Jetson Nano Google Maps at 4k is far from super smooth, perhaps 10 FPS or only 5, and more handicapped by the amount of data the CPU side has to handle. As you zoom in closer, frame rate increases, as… Read more »

I know pfsense doesn’t like realtek a lot, but will this be a good candidate for a cheep 2.5G router?

if pfsense doesn’t like it go with ipfire. ipfire is based off of linux instead of bsd so it would likely be more agreeable with a wider range of hardware.

edit: actually.. It looks like it needs driver installation for the networking to work in Linux. So for the moment you might be out of luck for either.

> I know pfsense doesn’t like realtek a lot   It’s especially users that don’t like Realtek a lot based on experiences they had one or two decades ago with older revisions of RTL8111/RTL8168 and Fast Ethernet chipsets. And this applies not only to pfSense users but to an awful lot of Linux ‘experts’ as well.   Realtek did great improvements in many areas (for example they still provide the only hassle-free USB3-GbE adapter that performs also pretty well – RTL8153) and this applies even to later revisions of their RTL8111 chipsets as used for example on original ODROID H2.… Read more »

Thanks for some logic tkaiser. The Realtek issue has almost reached urban legend status.

I’ve tried both the RealTek 2.5Gbit and Aquantia/QNAP 5Gbit USB3 Adapters with a very similar J5005 on CentOS7: RealTek delivers 30MByte/s and Aquantia is effectively throttled by USB3 encoding limitations to 40MByte/s, so it’s not really worth the upgrade at twice the price.   In all of these cases you’ll have to compile a source code driver on kernel upgrades, which can be a bit of a bother in a locked down software appliance.   With Astaro aka Sophos UTM this should otherwise work fine, pfSense’s BSD seems to lag a bit on driver support.   Actually I got myself… Read more »

Data rates are actually 300 and 400MByte/s, respectively: Sorry for the mistake!

nice upgrade. Have placed an order.

So finally they delivered. 🙂

Cannot find the datasheet for neither, the Intel J4115 nor Realtek RTL8125B.

How can anybody trust a company that has so little confidence in it’s own products.

Guess why smart people order ODROIDs via Hardkernel distributors. I expect H2+ being available for +160€ on pollin.de once available.

Having bought the second revision of H2 I do not feel too bad not having 2 x 2.5 Gbit ethernet ports. I do not have use for it yet, everything in my local network is capped at 1 Gbit. HardKernel is actually listening to its users, there were enough voiced saying that they would want 2.5 Gbit instead of 1Gbit. I rarely max out 1 Gbit locally, but the Realtek nics work really well. I am actually thinking of using a dedicated port for the Internet and one for local network (having 2).