While Gigabit Ethernet has reigned supreme in the home over the years, 10 Gbps Ethernet has been used for a while in the enterprise.

But if you intended to upgrade your home network to 2.5 Gbps Ethernet (aka 2.5GbE) possibly with an ODROID-H2+ single board computer in the mix, you may have found 2.5GbE switches are pretty expensive going for several hundred dollars. 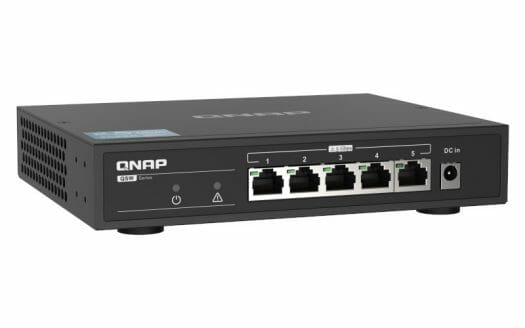 But QNAP has just launched its first 2.5Gbps Ethernet switch specifically designed for home users with a price in the $100 range, and available in Amazon UK for 108 GBP or in Taiwan for 2,999 NTD.

The QNAP QSW-1105-5T switch is also fanless ensuring a (near) silent operation. Most people won’t have an Internet connection over 1 Gbps at this time, so it’s especially useful for local network transfers, including full backups that may take a long time. QNAP also mentions 8K video playback, but since most videos will likely be compressed with H.265/AV1, Gigabit Ethernet should definitely be good enough for the task with a typical bitrate of 85 to 110 Mbps expected for 8K videos.

You should not need to purchase new Ethernet cables, as existing Cat5e and Cat6 cables should work for 2.5GbE in theory at least, as I have some Cat5e cables that only work at 10/100M with a D-Link switch. Most computers and laptops don’t come with 2.5 GbE just yet but in PCs. you could add an inexpensive ($30) 2.5GbE PCIe card, and some USB 3.0 to 2.5 Gbps adapters are sold, also under $30, for devices without PCIe slots.

An indirect consequence of moving to 2.5 Gbps Ethernet networking is that hard drives with a typical 100MB/s sequential transfer rate will become the bottleneck, as even the faster ones only achieve 200MB/s (or 1.6 Gbps). That means an upgrade to SSD drives, so a few hundred dollars network upgrade may end up being fairly expensive depending on your storage needs. I’d be interested to read comments from people who already upgraded their network to 2.5 GbE in a home or home office environment.

More details may be found on the product page on QNAP website.

If your cables are only working with 10/100 it usually means one of the conductors is damaged. They are able to operate at lower speed with damage as a fallback.

I switch there’s also something fishy with the D-Link router, as one cable works at GbE with most hardware, but randomly switch to Fast Ethernet with others (e.g. the Ryzen Embedded board I tried a while back).

Usually this is due to D-Link’s crappy “green ethernet”, which does I-don’t-know-what, but likely reduces the voltage on the wire, making it more prone to noise.

There are also cables and even patch-cords with only 4 wires, not all 8. Not sure which “Cat” those claim to be, but entirely possible to find some if you have a pile of UTP cables collected over time.

2,5Gbps and 5Gbps has never been used in enterprise enviroments, those speeds are specifically made for home and small office use so can be used with older cables that you might aldready have in your walls. For enterprise we use 100Mbps, 1Gbps, 10Mbps, 25Gbps, 40Gbps (really only 4 x 10Gbps), 50Gbps, and 100Gbps. Most common in enterprise today are 1Gbps and 10Gbps.

> even the faster ones only achieve 200Mb/s I guess this should read 200MB/s with a capital B? Anyway, sequential transfer speeds upwards 250 MB/s on the outer tracks of modern HDDs are somewhat common since years. The point is: HDDs use ZBR (Zone bit recording) and as such there are more sectors on the outer tracks and within one rotation more data can be read in the same time compared to the inner tracks with less sectors. So while an HDD in some benchmark might show an average sequential transfer speed of less than 200 MB/s it will be a… Read more »

Many if not all new NAS (Network Attached Storage) boxes for multiple harddrives made to home use, like those from Synology and QNAP, offer SSD cache as an option in addition to the RAM cache the usually use. That means that if that you can have several less expensive spinning harddrives in a RAID (normally RAID-5) plus one or two smaller SSD disks that are only used for cache. Newer NAS modellels even offer seperate slots for SSD disks as cache. My older 8-disk Synology has a optional PCIe-slot where I can install a card for SSD cache or 10BGbps… Read more »

> 2.5 Gbps, 5 Gbps, or even 10 Gbps Ethernet has been used for a while in the enterprise Nope, it was either GbE or 10GbE with nothing in between. NBase-T is ‘rather new’ and a lot of ‘enterprise administrators’ is plagued with ignorance and as such ignore new technology since they think they’re using ‘something better’ already for a decade. Depending on cables with 10GbE it’s all or nothing while NBase-T would negotiate a stable 5GbE or 2.5GbE link with same inferior quality cables (that are already in the walls). And given that 10GbE links between clients and servers… Read more »

It’s really cool to see that those whose revenue depend on cables start to react to WiFi’s speed increases and make higher cable speeds more accessible and affordable to the end user. Such a small switch is definitely something I’ve been thinking about for quite some time now, and I must confess I’m really interested. Another point is that usually when you mix speeds in a switched network, you end up with craziness due to flow control (i.e. when a slow device reads from the fast one, the whole segment gets limited to the slowest’s speed). But mixing 1G +… Read more »

> 2.5GbE switches are pretty expensive going for several hundred dollars BTW: you were comparing with an PoE switch and those are more expensive in general. If it’s about an NBase-T switch that is also capable of 5GbE and 10GbE (both copper and SFP+) then I can recommend my current lab switch as long as you can put the thing in a drawer or cabinet: Netgear MS510TX, twice as much ports than the QNAP thing above, some of them significantly faster, slightly more than twice as expensive. But since it’s 10GbE capable it’s equipped with an annoying fan so nothing you want… Read more »

There are two versions on the Amazon link one with PoE, one without.

Not really since Amazon wants to be smarter than both of us. If I click on your amzn.to link I get immediately redirected to https://www.amazon.de/dp/B07BMJ28V9/ (maybe not only geolocation based but their tracking crap as well).

Ah yes, I forgot people from different locations will end up on different Amazon websites (US, UK, FR, DE…). The US shop has both versions.

And Amazon push the more expensive offers on searches.

The Odroid H2+ works 100% OK with 2.5GbE, you get 2.35Gbits/sec with iperf3. It can also comfortably do 10GbE with for instance SolarFlare SFP+ card via NVMe/PCIe gen 2 x4 adapter. Cards can be found for $20 on eBay. Finally the H2+ will go 11+ or 14+ GbE depending on direction with IPoIB. The modern PCs reach 40+ GbE. Mellanox hardware used from eBay still less expensive than “new” consumer 10G. For more info, visit the Odroid forums.

This exercise is called ‘Let’s choose a network adapter that consumes multiple times more energy than the ‘server’?’ 🙂

So beside being part of participating to Earth Climate Change(**), it’s just a question of cost analysis.

On the other hand, the PCIe cards based on the 8125 work OK. The Odroid H2+ use the 8125B which is more recent and its driver is not always yet in the upstream kernel, so you have to install it. They have a wiki page about it. The H2+ connected fine to an onboard Aqantia 10G (PC mobo), autonegotiation was OK. Through a switch I had to disable autonegotiation and downgrade the AQ to 2500. Your mileage will vary.

For NAS usage, just use async for Samba and/or NFS. In doing so the destination disk does not become a bottleneck. Even truer for 10G or higher.

Now waiting for a Chinese version of this, without the “QNAP” brand fee included in the price.