The tiny (23 x 16 x 2.3mm) module is based on the company’s ESP32-PICO-V3 System-in-Package (SiP) based on ESP32-V3 dual-core Xtensa LX6 WiFI and Bluetooth SoC, a 4 MB SPI flash, a crystal oscillator, filter capacitors, and an RF matching network. 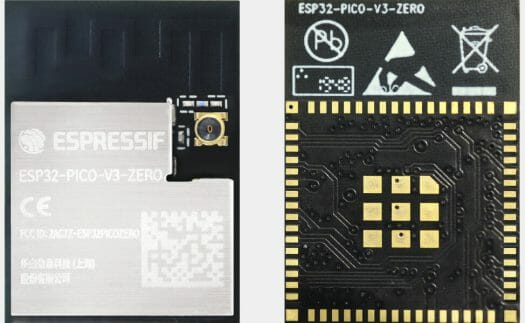 The module supports 2.4 GHz 802.11 b/g/n WiFi, Bluetooth, and Bluetooth Low Energy connectivity and comes with a PCB antenna [Update: That should be an RF test connector instead, see comments]. ESP32-PICO-V3-ZERO module interfaces to a host MCU through a UART interface, and to speed-up time-to-market the module comes pre-certified for regulatory certifications such as FCC, CE, SRRC, IC, and RCM.

The module comes pre-programmed with the ACK module firmware managed by Amazon and is pre-provisioned to have credentials and connect to an ACK-managed cloud service.

If you can find development resources on Amazon developer website, where after registering as a developer, you’ll be able to access the firmware, a module utility for firmware updates, generating barcodes, and provisioning products, as well as the ACK Device SDK 3.1 that contains C source code for the host such as Arduino Zero, or STM32 boards. 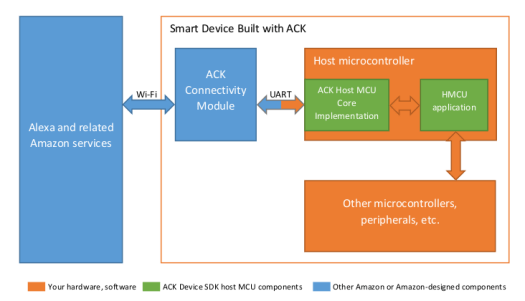 ESP32-PICO-V3-ZERO is not the first ACK connectivity module, and it’s still considered to be at the developer preview stage, with the earlier WM-BN-MT-52 ACK module and devkit recommended for production. Having said that Amazon states the new ESP32 powered ACK module is as much as 50% lower in cost.

If you’ve never heard about Amazon Alexa Connectivity Kit – which they launched last year – you may want to read the blog post announcement about the Espressif module which gives an overview:

With Alexa Connect Kit, you can make nearly any device with power into an Alexa-compatible smart device your customers will love, all at a fixed per-device cost. You simply integrate an Amazon-managed ACK module into your device, connect it to your device’s microcontroller (MCU) over a serial interface, and add interface code to your device’s firmware to interpret control messages from the ACK module. The ACK module adds Wi-Fi, Bluetooth LE, and all the software needed for Alexa control, Frustration Free Setup, security, and log and metric collection – managed and updated by Amazon. For your customers, products built with ACK include Alexa control through voice and the Alexa app, and the option to support Amazon Dash Replenishment. For developers, ACK enables you to connect your devices to Alexa without the need to operate a cloud, create and maintain an Alexa skill, develop a companion app, or deal with IoT firmware integration. With an ACK module on your device, you can focus on building great hardware.

If you are interested you can register your interest by providing your contact and project details such as target shipment volume. You may also find further details on the product page on Espressif Systems website.

I actually use all my esp’s (esphome powered) to be cloud free/independent and for the full blown beauty for sure!

Wouldn’t it be better to release a binary-only library for esp32 and example code instead? It would be pretty good for esp32-lyraT and such.

If the pictures are correct, instead of u.FL it seems to be a RF test connector.
Thus external u.FL antenna may not be compatible.

Tiny? It’s only slightly smaller than the wroom32 but nowhere close to ublox size.