The company has now provided more details about Alibaba XuanTie 910 (aka XT910) processor during the virtual Hot Chips 2020 conference, and he notably compared the RV64GCV core found in the processor to Arm Cortex-A73 core. 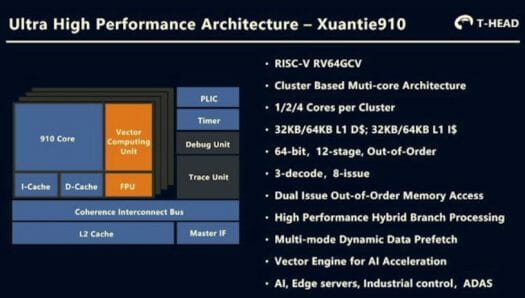 Alibaba RISC-V Turbo instructions provide acceleration for bit operations, memory access, core sync, etc.. and show some improvement in OpenSSL and Nbench benchmarks. They can be disabled to keep compatibility with “standard” RISC-V. 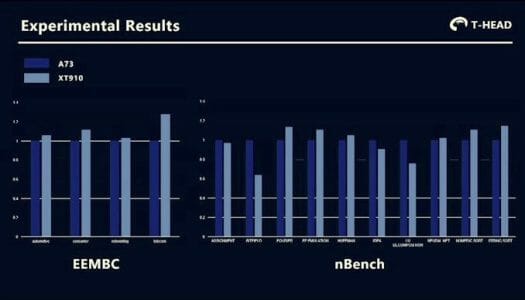 T-Head semiconductor, the Alibaba organization that designed the chips compared the performance of XT910 to Cortex-A73 (Kirin 970) with the same L1 cache capacity, and showed both are closely matched. It’s unclear whether the benchmarks included the RISC-V Turbo extension. As a side note, it will be interesting to see how custom RISC-V instructions will be managed in the Linux kernel, and whether those will be enabled at runtime or/and compiler time.

In an Anandtech interview and live blog, the company confirmed KT910 is a high-end core for embedded SoCs to be found in the cloud and edge devices, and they are working with open-source companies to make the source code available, but there are apparently legal challenges for a high-performance core. 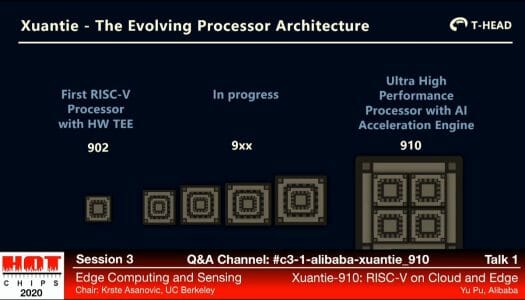 The company is not only working on high-performance cores, as they have already designed XT902 microcontroller core (Cortex-M0+ class) with hardware TEE, and there are plans for XT903, XT907, XT908 cores filling the gap between XT902 and XT910.

This would be nice as a Pinebook Pro 2 cpu.

I suspect there won’t be any GPU in XT910 based SoCs since they target “cloud and edge”.

Risc-V microservers in the hands of masses, yes, please!

It would have been intresting to know the power consumption of each system in comparison.

Would like to know the legal challenges for high performance cores.

Also wonder if these might appear in the open RISC project?

I am also curious about it, although i expect US restrictions againt improving China’s tech industry.