Powered by a Rockchip RK3308 quad-core Cortex-A35 processor, Radxa Rock Pi S single board computer was launched with specifications listing PoE support via an add-on board. Just one little problem though: it was not available for sale.

The good news is that Radxa has now launched a PoE HAT for the Linux SBC adding support for 802.3af PoE up to 10W input, making it one of the smallest single board computers with PoE support in the world, and adding audio features with a 3.5mm audio jack, and an FPC connector for a microphone array. It can be purchased on Seeed Studio for $13.00. 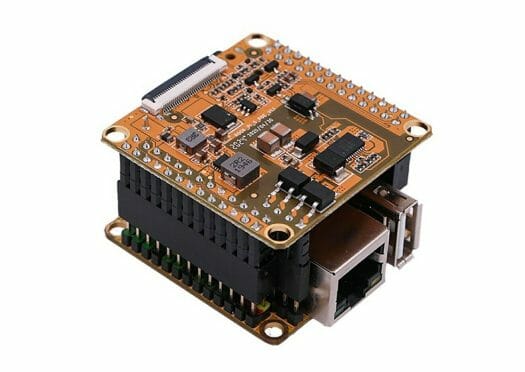 Here are the specifications of the complete solution with Rock Pi S SBC and PoE HAT: 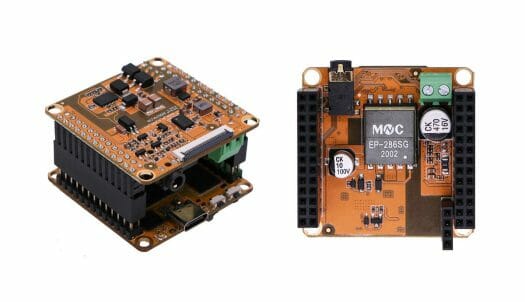 Rock Pi S with PoE HAT is not quite the world’s smallest SBC with PoE as Vocore2 takes the crown, but it’s getting close and is much more powerful with a quad-core processor and is equipped with more memory and storage, and beside OpenWrt, also runs Ubuntu 18.04 and Debian 10, as well as community images built with Armbian.

If you look at the photo you’ll notice GPIO header pins are not accessible anymore, and that’s why there’s a version with optional GPIO pass-through headers, but sadly it’s not offered on Seeed Studio at this stage. According to information in the wiki, the version of the board with longer pins is called the Rock Pi S PoE HAT “FSL“. The FPC connector for a microphone array looks nice, but I could not find any such microphone array.

Another important point is that there are three versions of Rock Pi S board, and only one supports the PoE HAT. If you have a board with 256MB RAM, or no SD NAND flash, it will not work with the add-on board. So you have to make sure you already own Rock Pi S with 512MB RAM, and 1GB SD NAND flash, or order it for $23.99 on Seeed Studio or AllNetChina. There should also be an option to add the PoE HAT on the ordering page, which brings the total to $36.99 plus shipping.

Have had the PoE hat for some time now as AllNet has had it listed for months. There is also a case available for the Rock Pi S and PoE hat. However there appear to be manufacturing problems with the case. 1 of the 2 I received I will have to take a dremel to in order to remove excess metal that prevents the case from closing.

AllNet noticed this comment and has responded to ship a replacement case! Excellent customer service!