Radxa unveiled Rock Pi X intel SBC powered by an Intel Atom x5-Z8350 processor over a year ago with a starting price of just $39 making one of the cheapest Windows 10 single board computer together with Atomic Pi, but the latter is not super convenient to use.

What’s new is that you can now buy Rock Pi X SBC, but not quite for $39 since the board has been redesigned, and instead, you’ll find the 4GB RAM/32GB eMMC flash model (Rock Pi X B4E32) for $75 on Seeed Studio, but if you can do with 2GB RAM and 16GB flash storage, AllNetChina has stock for $59 plus shipping. Those are the so-called model B boards with WiFi and Bluetooth, as well as support for an optional PoE module. 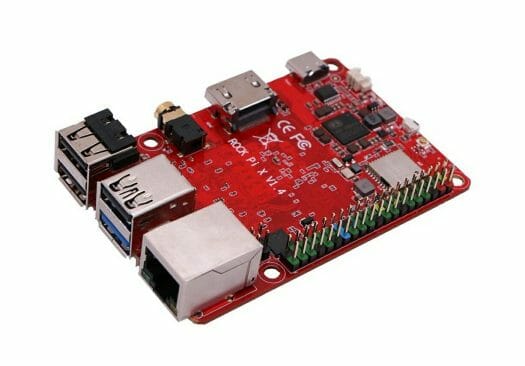 The specifications have changed since last year with the eMMC flash being soldered directly to the board instead of having a removable module found in Rock Pi X v1.3 or earlier, and the MIPI DSI/eDP display port and MIPI CSI camera interface have been removed from the specs. However, we can still see an LCD connector on the top right corner of the photo above.

If you intend to run Windows 10 on the board, you’ll need to buy Rock Pi X with 32 GB or more storage capacity. Ubuntu 20.04 should work fine with just 16 GB, and other lightweight distributions will have no problem running on 8 GB storage. Want more technical details about the board and getting started guides? Head over to the wiki.

Thanks to Jim and j_c for the tip.

$99 for the 4GB RAM version w/128GB eMMC is not bad. Unfortunately, is only available for preorder. Sadly,There will be a waiting period of 14 business days before it gets shipped. Shipping to North-America is $20 bucks
If you are planning to install windows on it, Do not even try with less than 4GB RAM and 64GB for storage which is the minimum to run it decently.

It depends what people plan to do in Windows. If they’d like to use it as a low-end computer, 32GB will quickly fill out, but for some embedded applications it will be enough. For reference, I’ve recently installed both Windows 10 Enterprise and Ubuntu 20.04 in dual boot configuration in a Ryzen Embedded SBC with 32GB eMMC flash.

Available from many different sources for quite some time. I’ve been using one as a media player/TV box for years. It’s about the only way to get a decent ATSC tuner.

It’s pretty similar to the original UP board, which I find a decent always-on small PC. I have one lying on my desk at the office that serves me as an external client/server for whatever experiment I need. That’s not fast, of course, with all cores on it runs at 1.68 GHz. But it’s decent.

Interesting board. Would be better if they upgrade the CPU with the more powerful one. x8350 raw power is almost half of odroid N2’s s922x.

For me it’s all about the use case and if it’s not server stuff (where massive parallelism can kick in) single-threaded performance is what’s important. Here the S922x scores maybe 25%-30% faster than a x8350.

Yep. Depends on use cases. My use cases is for web server and desktop use. But still, if I can get better hardware with similar price/perf/feature/power, I’ll get the better one 🙂

I’ve had a Z8350 mini pc with 4Gb/64Gb for a while now and whilst Windows 10 runs, it’s not quite the experience that you really would like,

For Linux, LibreELEC, Android x86 though it runs very nicely.

USB-C and POE are good things to see on a SBC though and overall it could be useful to some, although the SOC is looking quite old now and may not look that attractive compared to what has come along since the Cherry Trail was introduced.

But still, for one interested with hardware acceleration (gpu) on linux, it’s still interesting, as we only have a few arm sbc that have that kind of luxury.

I had also a Z8350 mini-pc and it worked fine for linux. But recently I bought the Larkbox for 140€. Intel J4115 with UHD600 graphics, 6GB ram and 128GB emmc, m2 expansion and with casing. If you don’t need the gpio’s the rock pi x isn’t worth the money according me.

I thought this thing was never going to come out!

Isn’t the rock pi name a bit confusing? I thought the boards were rock pis because they were Rockchip based.

Anyhow looks good for an SBC for those that don’t want to waste a week trying to find the right sd card image uploaded to a dodgy google drive account. This should just work with Debian.. I think the Debian kernel might need to be rebuilt to get the AXP288C battery charger to work/register the battery state though.

Im surprised that the Atom X5 still exists. I thought it had reached EOL already.

Also, has someone tried this SoC with emulators? I’ve been wanting to use a Pi4 for a retro console but normally X86 CPUs run better so i dont know on which to invest

I had several devices back in 2016 with Intel Atom X5-Z8350 CPU’s and they were painfully slow for running windows 8.1 and windows 10 as a daily driver. They all had 2Gb and 4Gb of RAM. They all ended running Ubuntu and Debian as surveillance machines.

Does it need or come with a heat sink? Is there even one available?

A heatsink is available separately.
https://shop.allnetchina.cn/products/heat-sink-for-rock-pi-x?variant=32080746545254