The company has now unveiled an update with Arm Ethos-U65 microNPU that maintains the efficiency of Ethos-U55 but enables neural network acceleration in higher performance embedded devices powered by Arm Cortex-A and Arm Neoverse SoCs. 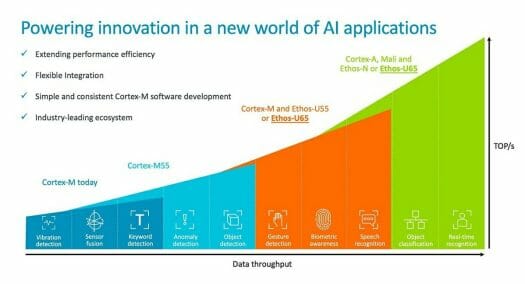 Arm Ethos-U65 delivers up to 1 TOPS, and as seen in the diagram enables features that can not be done with Ethos-U55 including object classification and real-time classification. Compared to Ethos-N78 NPU, the new microNPU offers less AI performance, but a significantly higher efficiency although AFAIK no quantified by Arm.

The company says the development workflow remains the same with the use of the TensorFlow Lite Micro (TFLmicro) runtime that runs on a Cortex-M core and handles operations that are not directly supported by Ethos-U65. This is true even in Cortex-A/Neoverse based systems, where the microNPU is also paired with a Cortex-M microcontroller core.

Ethos-U65 supports many popular models including Mobilenet v1/v2,  Resnet-50, Inception v2/v3, etc.., and models that are not supported can run on the Cortex-M cores using Arm Compute Library or CMSIS-NN libraries.

Systems-on-Chip based on Ethos-U65 will probably only start to show up sometimes in H2 2021, as Cortex-M55 and Ethos-U55 were announced last February, and AFAIK, no silicon vendor has announced a Cortex-M55 microcontroller so far. More information may be found on the product page and Arm’s community blog.